Storming the battlements, hoisting the petard and seeking the bubble reputation even in the cannon’s mouth, it’s the Open Thread!

The big news this week: TV executives on a rampage! Heroes got canceled after four seasons, meaning we’ll never know whether the time traveler and the amnesiac would hook up and produce a power-negating baby who’d save the past from the future (you know who I mean, right?). Law & Order was canceled after 20 years on the air, though you can still catch “Special Victims Unit,” “Criminal Intent,” “Los Angeles,” “Whale Watch,” “Ya-Ya Sisterhood” or the recently announced “Law & Order: Die Darkman Die” in syndication. And while Parks & Recreation hasn’t been canceled yet, it was bumped to mid-season 2011 – rarely a good sign. My advice? Have a young will-they-or-won’t-they couple consummate their passion. That always helps.

(P.S. Belinkie would kill me, and then be arrested by Zombie Jerry Orbach, if I didn’t remind you to check out his Law & Order Database)

Question: script a cross-over episode between any 2 of those 3 imperiled shows. Give your elevator pitch in the comments. 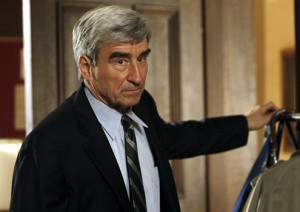 Persons denying the existence of robots may be robots themselves.

NBC wasn’t the only afflicted network. FlashForward (a favorite of our commenters) got the axe as well, prompting a thousand bloggers to rub their hands together and draft posts entitled, “DID YOU SEE THAT COMING?” Meanwhile, at CBS, “Cold Case” got moved to the cold case file, “Ghost Whisperer” received its eternal reward and “Numb3rs” could not boost its numbers, proving once and for all that even Overthinking It will reach for low-hanging puns if they can.

Question: make up your own punning title to head a blog post announcing the cancellation of one of these shows, because clearly Perich needs a hand. 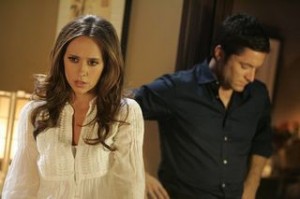 We also would have accepted 'Giving Up The Ghost.'

Did a ghost inspire D.A. Sam Waterston to open a long-dead file on a park ranger who could see the future something-something numbers? Or is there any other pop culture news you want us to Overthink? Sound off in the comments, for this is your … Open Thread.