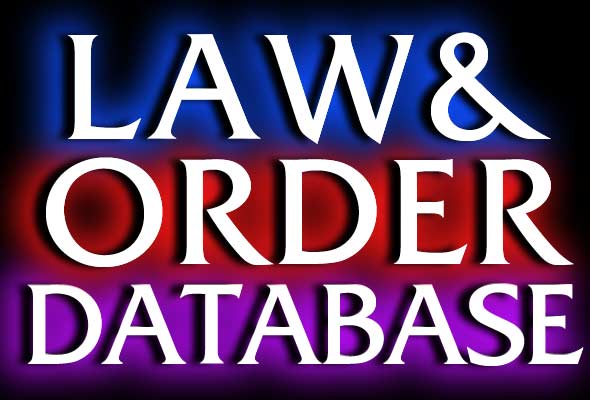 It seems strange to say that I’m going to miss Law and Order, since it’s on TV roughly 87 times a day. TNT airs it pretty much non-stop. It’s only a matter of time before they start showing two episodes at once, split-screen, like in Back to the Future 2. Nevertheless, 456 episodes doesn’t seem like nearly enough. Nowadays even the sitcoms have aggressively serialized storylines stretching from episode to episode. Law and Order always delivered a self-contained package in 43 minutes, perfect for those of us who love quality TV but don’t want to make a commitment. I seldom bothered to watch Law and Order‘s new episodes on the night they aired, but that was the whole point. I knew I’d catch them years later while channel surfing, and they’d still be awesome.

But there is one bright side to the end of the show. We now have a massive, complete data set to dive into.

OTI readers know that Excel is our friend on this site. Mark Lee found the secret correlation between oil production and rock and roll. I charted the snowballing snootiness of the Academy Awards. But this is going to be our biggest project yet–finding the hidden patterns in 20 seasons of murder trials.

To do this, we’re going to need your help. Surprisingly, there’s no place online that actually recounts complete Law and Order plots going back to the beginning. The Law and Order wiki is pretty vague on plot details. All Things Law and Order does encyclopedic recaps, but only for the newer episodes. It’s easy to find one or two sentence synopses, but we want to know how each and every case ended. For that, I think someone is going to have to actually watch a lot of Law and Order. Luckily, that’s what we were all planning to do anyway, right?

Alright detectives, bookmark this page. Everytime you see an episode of L&O (by the way, we’re only talking about the mothership here, not the spinoffs), stop by. It’ll only take 30 seconds to answer this two question survey:

[UPDATE, 7/23: Whoever is watching every single episode of the show in order and sending me the results, please email me at [email protected] I just want to digitally shake your hand.]

Contribute to the Law and Order Database

Note that if you pick the “no clear outcome” option, please indicate in the “other” box if a certain outcome seems likely. A good example is the “Blackmail” episode from January. Towards the end, the prosecutors have the murderer identified, but the key witness refuses to testify. In the climactic scene, they convince him to cooperate, allowing the trial to go forward. We never see the results of that trial, but McCoy and Co. are swaggering like it’s an easy guilty verdict or plea bargain. Because we don’t know for sure, you would indicate it as “no clear outcome,” but mention the circumstances so we can take that into account.

So what do we hope to learn from this? Besides reminding ourselves of how awesome Sam Waterston is?

First of all, did the conviction rate change from season to season? If so, can we correlate this to anything in the real world? For instance, the actual crime rate in New York spiked in the early 90s, when the show began, and then declined markedly through the Giuliani years. Was this trend towards law and order reflected in Law and Order?

But maybe the real-world crime rate is less important than the real-world economy. In the first 10 episodes of this current season, only 6 prosecutions resulted in convictions. Maybe the bad economy makes people uneasy about the ability of government to protect us?

We can also correlate the results with the show’s fictional characters. If Adam Schiff is your favorite D.A.,  you’ll finally be able to prove that he had a higher percentage of guilty verdicts than Arthur Branch. And how does Jerry Orbach compare to Anthony Anderson? I mean, weightwise, it’s no contest, but detectionwise? We owe it to our children to find out.

Is is, of course, totally possible (if not probable) that the results will be a whole lot of nothing. As much as I’d love to see a sexy-looking curve on that graph, it’s likely that the show has always had about three-quarters guilty verdicts: any less and it would get frustrating for the audience, any more and it would start to seem like too much of a sure thing. With only 20-something episodes per season, there’s going to have to be a significant change to seem like a real trend and not just random statistical noise. And even if there is a pattern waiting to be discovered, it might be a long long time before we’ve collected enough information to find it.

But hey, this is Law and Order we’re talking about. Years from now, long after you’ve forgotten all the crazy revelations in the final episode of Lost, you’ll still be catching reruns of L&O after work, marveling at Dennis Farina’s mustache. And when you do, come back here and tell me if the good guys won that day.

The finale just aired. I didn’t care for it, because it violated two of my Rules for Solid Law & Order Episodes:

I know they didn’t know this was their swan song, so I can forgive them for being uncharactistic. Still, all those ticking clocks theatrics seemed to ape the more Bruckheimeresque procedurals that followed in L&O’s wingtips.

However, the episode is more than redeemed by one final demonstration of Sam Waterston’s awesomeness. It’s about three-quarters of the way through, and the police are having no luck getting a teacher to reveal information about a potentially homicidal colleague. Jack McCoy hasn’t had a single line all episode, but he pokes his head into a conference room to watch a Teacher’s Union lawyer sneer down the detectives’ desperate warnings of a possible massacre. McCoy then heads the guy off at the elevator to ask:

Just how far up your ass is your head?

And when the Teacher’s Union guy continues to talk tough, McCoy sets him straight:

If your obstruction allows a massacre to happen, I will crucify you, Mr. Graylick. I will charge you with negligent homicide, and after I convict you I will resign my job and represent the families of the victims in a wrongful death suit against you and the union. By the time I’m done, you’ll be finished. So my advice to you is get out of my way.

I’ve watched that scene about five times so far, and I’m still giggling every time.

Anyway, in honor of the finale, here’s some preliminary results from the Law & Order Database.

Thanks largely to the heroic efforts of Kyu (see the comment thread), I now have the complete results for Season 1.

The easiest way to analyze this data is, how often did they convict the criminal? In Season 1, there were two Not Guilty verdicts: The Reaper’s Helper and The Secret Sharers. However, the notes I received say that in the case of The Reaper’s Helper, the DA actually sought this result (the defendant was dying of AIDS and they didn’t want him to go to jail). This is a tricky call – is the outcome Success, since the DA got what he wanted? Or is it Failure, because the guy was charged with Murder and found Not Guilty? I think for now, I’m counting it as Success – they convicted the guy of what they thought was fair.

There are five episodes where there isn’t clear Success or Failure. Poison Ivy and The Torrents of Greed (a two-parter) ended with the defendant’s death. Out of the Half-Light is about a girl who claims she was raped, but it turns out the story was a complete fabrication. A Death in the Family is about a cop who shoots his partner, but it turns out to be self-defense, and the DA tells the Grand Jury it was Justifiable Homicide.

Let’s compare with Season 20. First interesting thing is that all 23 episodes ended with clear Success or Failure (if you disagree with my analysis, by the way, let me know). Of those 23 episodes, 4 were Failures. That’s an 82% success rate.

Yeah, that’s a big difference in the success rates. But if only two or three episodes had ended differently, both seasons would have been exactly the same. I am still guessing that the results aren’t going to graph well – the success rate is always going to be between 80% and 95%, but won’t trend smoothly from season to season. We’ll see. Keep sending the data along everybody!

23 Comments on “The Law and Order Database”