“Treme” is like a park with a sign that says “Welcome” followed by a long list of “Do Not”’s.
—John McWhorter, “Please, Treme, I Beg You – Get Over Yourself”

Antoine Batiste (Wendell Pierce), desperate for work, takes a gig playing his bone in a Bourbon Street club (Episode 2, “Meet De Boys on De Battlefront”). He winces when handed the number to call. When wandering down the tourist trap toward his gig, he runs into a fellow artist and lies about where he’s headed. “There’s still pride on Bourbon Street,” he’s told several times; it’s repeated like a rosary chant.

Earlier in that same episode, we formally meet Sonny (Michiel Huisman) and Annie (Lucia Micarelli), two street musicians hustling tourists for a little coin. A trio of college kids from Wisconsin, their cheeks ripe with baby fat, applaud them and leave tips. They mention that they’re in New Orleans rebuilding houses with their church group. “You ever even heard of the Ninth Ward before the storm?” Sonny asks. He bristles until Annie changes the subject, then offers to repair the offense by playing “When The Saints Go Marching In,” all the while harping on its fakeness. “You said ‘Saints,’ not us,” one of the college students points out, but Sonny’s too fired up to stop now.

But the culmination of this attitude comes at the end of Episode 3 (“Right Place, Wrong Time”), when Albert Lambreaux (Clarke Peters) holds a service for the loss of his Indian troupe’s “wild man.” Lambreaux, his Indians and several Chiefs from other troupes gather outside the wild man’s home and begin a mournful yet vibrant dance. They’ve worked themselves into a riot when a big white bus labeled “KATRINA TOURS” lumbers down the road toward them. The driver rolls his window down and asks what’s going on, as several passengers (their faces obscured by tinted windows) snap pictures.

“Drive away from here, son,” one of the other Chiefs admonishes. The man apologizes (without being told that he’s intruded on a memorial service) and drives on. 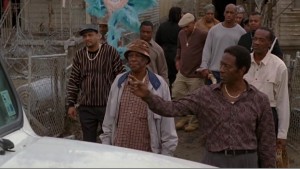 The message is clear: New Orleans is not for the tourists. Most people who visit New Orleans – for Mardi Gras or a summer trip – go no more than a block from Bourbon St, that supposed source of shame for the rest of the city. The majority of America had probably never heard of the Ninth Ward, poor as it was, before Katrina and the cameras came. Most of us, in fact, are the equivalent of the tourists snapping pictures in the back of that bus. And Simon and Overmyer have told us, in no uncertain terms, that they do not want us around.

We are the tourists. We’re the weekend crusaders, cruising into town to gut a mold-ridden house and then flying back to Middle America. If we had been more aware of the vibrant artistic culture of Faubourg Tremé before the floods destroyed it, we would not need shows like Treme to take us inside. And we know the residents are suffering; David Simon never shows us a world where everything’s running smoothly. When the residents of New Orleans ask, “Why the fuck are you even here?”, as novelist Creighton Burnette (John Goodman) asks of the BBC crew in Episode 1 (“Do You Know What It Means”), that’s directed at us. The audience. The people watching this show, without whom the show – and this increased awareness of the suffering of the Ninth Ward – would not exist.

In a normal show this would be confusing enough. But the people who brought us The Wire and Generation Kill don’t produce a lot of light, popcorn-and-beer TV to begin with. One of the reasons The Wire struggled to find an audience was because David Simon and the writers under him presented a Baltimore with impenetrable accents, an army of complex characters and zero exposition. That’s their style. Traditional TV puts characters into archetypes and a recognizable hierarchy. Traditional drama begins each episode with a problem, builds it to a boil, and then resolves it at the end, with a touch of denouement and maybe a hint of future trouble just before the credits. Not so with The Wire or Generation Kill, where the problems introduced in one episode usually aren’t resolved until three or four episodes later, if at all.

And not so with Treme. Start with the thick patois of N’awrlins dialect. Add to that the complexities of New Orleans’s musical culture: the second-line marching bands, the Mardi Gras Indians, the hustling for a gig. Add to that the lines drawn between neighborhoods: light-skinned residents looking down on dark-skinned Creoles, Ninth Ward vs. Seventh Ward vs. Bourbon Street. Add to that Simon’s zero-exposition style and a slew of characters. Add to that a story which begins in media res: Batiste’s continuing poverty, Lambreaux’s desire to restore his Indians, LaDonna’s search for her son, Janette’s struggle to keep her restaurant afloat, Creighton’s quest for a constructive outlet for his anger. The very format of Treme resists casual viewing, to say nothing of its attitude.

Treme is a lens into the lives of artists in the Ninth Ward, recovering from Katrina and realizing the institutions they trusted – police, correctional facilities, insurance companies, FEMA – are not going to come through for them. Simon and Overmyer focus that lens for us and produce an image. This image, loud and baroque, baffles us: we want to spend hours exploring it but we only get glimpses. Then the artists shame us for looking. Drive away from here, son.

Do Simon and Overmyer even want us to watch Treme? 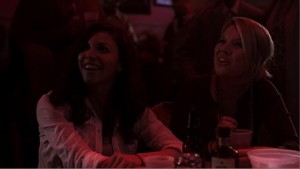 This is SO COOL!

7 Comments on “Overthinking Treme: Drive Away From Here”