Iron Man 2 came out this weekend and the critical reaction has been mixed.  While most agree that the film is fun to watch, few seem to think that it was a good film.  One of their key questions, posed also by Matt Wrather on the latest Overthinking It Podcast, is “What is this movie about?”

Numerous plotlines about a Russian scientist’s revenge, a rival’s attempt to take control of the Iron Man suit, Tony’s failing health and his relationship with his father were a little convoluted.  Layered on top of that, Samuel Jackson, Scarlett Johansson and the setup for future Marvel Comics movies Captain America, Thor and the Avengers seemed weird and extraneous (though I really like the idea of building a cinematic continuity across a number of different properties and defended it on the podcast).

But beneath all of those plots, the Iron Man movies are ultimately about technological transition and the Ages of Man.

The ancient Greeks believed that history could be divided into five ages: Gold, Silver, Bronze, Heroic and Iron.   Ovid and the Romans had a similar demarcation, omitting the Heroic Age of the Illiad and Odyssey.  Both cultures believed that they lived in the Iron Age, an age of warfare, strife, suffering and greed.

Modern archaeologists, always living in the past, borrowed the idea of Ages when discussing prehistoric civilizations.  The earliest tool users, as much as 100,000 years ago, started making weapons out of stone, hence, the Stone Age 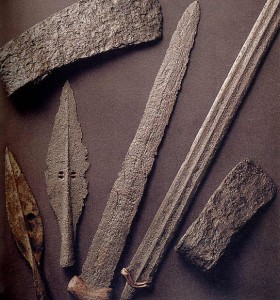 Then, 5,000 ago, some genius discovered that if you melted copper and added arsenic or tin, you got a strong, durable weapon that would last longer and hold an edge better than the stone weapons he was used to.  Tin and copper were hard to come by and involved massive trading networks from Britain to Babylon, but at that point, nothing beat a sharp bronze sword and suddenly you had the Bronze Age.  Early smiths in the Caucasus Mountains in southern Russia were probably the first to forge bronze using the locally available copper and arsenic and it’s likely that many of them went to a painful and early death from contact with that arsenic.  Progress is not without a price.

3,000 years ago, another genius figured out a way to generate enough heat to melt the much more prevalent iron ore that was sitting around all over the place.  Iron wasn’t as strong as bronze, but at 5% of the Earth’s crust it was and is the cheapest metal around.   Suddenly, everyone could afford a really shiny, sharp metal sword.  It was the Iron Age and its technologies led directly into the Historical Age (when they started writing stuff down and we don’t have to rely solely on archaeology to know what went on) and world we live in today. 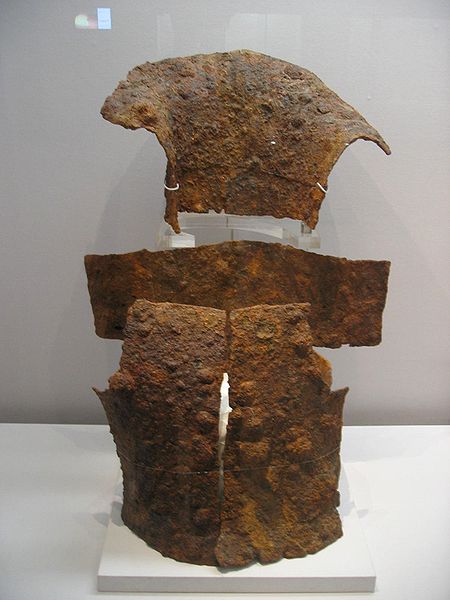 Early iron armor from the Middle East. Or, what happens to Iron Man if he stays out in the rain too long.

From out of a dark, cave-like building of mud bricks belching smoke and fire came these huge, magical, Age changing feats of ingenuity that shaped the world for the next millennium.   The early smiths were the first scientists, the first engineers, the people who brought humanity out of the cave of the past and into the modern age of technology.  For some perspective, the Stone Age lasted 100,000 years and has only been over for about 5,000.   Some historians believe that its early monopoly on iron forging helped the Hittite Empire, based in modern-day Turkey, destroy Babylon and maintain a massive empire.

The men and, potentially, women who made this magic were seen as something above the rest of humanity, holding a secretive, mysterious power that was passed from father to son.  In some cases, they even served as priests.  In Jenne-jano, an Iron Age city in what is now Sudan, archeological evidence suggests that blacksmiths also served as diviners, rainmakers, healers and (gulp) performed rituals like circumcision.  Their powers were so respected that even after the region converted to Islam, the blacksmiths held on to the respect of their communities. 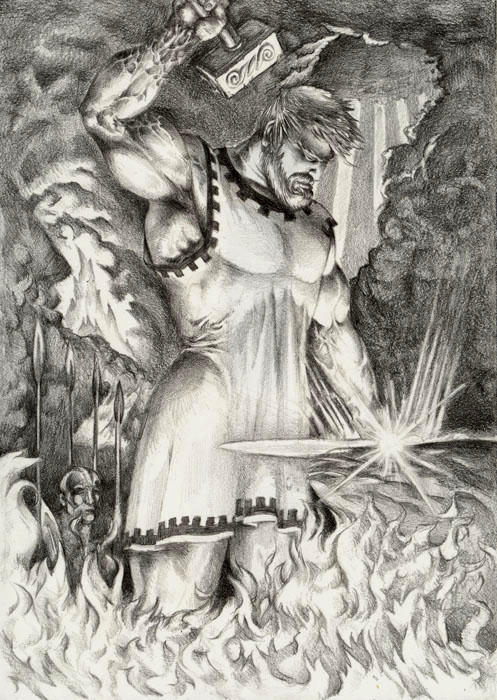 Vulcan at his forge.

Smiths not only served as priests and seers, they were the only profession that actually had their own god.  The only Greek or Roman god with a real job was Hephaestus (Rome’s Vulcan), the God of Fire and of Smiths.  Other professions may have had patron gods, but even the Greek musicians would have admitted that Apollo’s lute playing was only a side gig to the whole driving-the-sun-chariot-across-the-sky thing.   Hephaestus was the blacksmith of the gods, creating theirs weapons and armor, even building Apollo’s solar chariot.

He even married the Goddess of Love.   Sure, Aphrodite cheated on him with Ares, but still, you’ve got to be pretty important to merit the actual Love Goddess.  In addition, Hephaestus builds a number of automata, metal beings with personality and agency that help him in his work, arguably the world’s first fictional robots.  Hephaestus had some serious parental issues, with his mother Hera tossing him off Olympus for being so ugly, crippling him.  He only comes back to Olympus when they realize that they like his creations and send Dionysus to get him drunk.

Since then, iron and the people who deal in it have had a special place.  In the stories of fairies and supernatural beings that were told throughout Medieval Europe, only the touch of cold iron can defeat the villainous beasties.  That tradition survived into the last century, with iron horseshoes nailed above our doors for good luck.

Which brings us back to Iron Man.

The Iron Man films follow the transitions from one of these ages to another, with Tony Stark standing in for the smiths who perfected bronze and iron.  The crucial scene in the first Iron Man movie has Tony Stark, wounded and imprisoned by an Afghani warlord, in the darkness of a cave.  His only chance of escape and survival: using his superior technology.  There’s a whole montage of building the suit of armor that he’ll use to escape, but the seminal image is of a man hammering out iron in cave lit by fire. 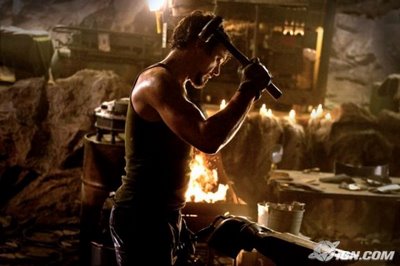 Tony Stark at his.

He succeeds, fighting his way from the darkness of the cave back to the light of civilization, not through his skill as a warrior but through his skill at the forge.  His first weapon?  His hands, the most important tool in any smithy.  His second?  Fire, which gives the smith the ability to turn ore into power.

Tony Stark has discovered a new kind of weapon that gives him an advantage over everyone else, and like those first iron swords of the Hittites, it’s a weapon that’s too expensive to go around.  While the American fighter jets he inadvertently takes on may pose some threat to him, Iron Man can take one of the world’s most advanced weapons systems out just by flying through its wing.  Like the first humans to move from rock to bronze, he has an advantage over his contemporaries that sets him apart, gives him power and allows him to, as we learn in the beginning of the second film, “privatize world peace.”  Like those early bronzesmiths, Tony Stark comes across as a sort of god, wielding mysterious powers that others can’t really comprehend.

The second film takes us into the second phase of any age, the period of proliferation.  As the recording industry continues to misunderstand, once a good idea has been made public, people are going to copy it.   The first American nuke went off in 1945.  By 1949, the Russians had one too.  Similarly, the Hittites couldn’t hold on to iron forever and within 200-300 years, most of the Mediterranean world and the Middle East had entered the Iron Age.

Congress is worried that soon, the Iron Man technology will spread, giving the whole world access to this powerful destructive force.  And so it happens.  Within months, a unusually badass scientist, Ivan Vanko, has perfected his own Arc reactor, weaponized it (in a potentially very self-destructive way – whips?  really?  Don’t you remember how Indiana Jones got that scar?) and gone up against Iron Man.   With the help of a Rolls Royce and an aggressive chauffeur, Iron Man beats Vanko’s ass down.

But by the end of the film, Vanko has teamed up with a rival military contractor (the modern equivalent of a rival empire?) to create a whole army of iron men, ready to take over the world.  He and Don Cheadle manage to take them down, but though the movie doesn’t discuss it, the plans are out there, the government wants them and there’s nothing that can be done to put the genii back in the bottle.  Sam Rockwell’s parting threats to Pepper Pots suggest that he and his technology will be back. 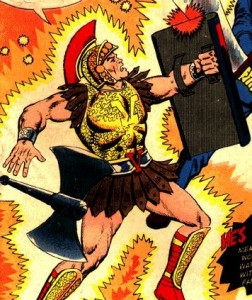 Inside sources say that Robert Downey Jr. turned down an offer to play the Son of Vulcan, another smith god based character.

In Iron Man 2, Tony echoes the plight of those first arsenic-riddled bronzesmiths, poisoned by the same element that gives him his power.  Like those ancients, his only solution is to find a new element – tin in their case, mcguffinium in his.  Power comes with a price, but it’s a price that can be paid with hard work and ingenuity.

Like the ancient smiths, he is a conduit to the primal powers of earth and fire from which the modern age is born.   And like the smith god Hephaestus, Stark lives on a mountaintop looking down on the world, surrounded by beautiful women and automatons that help him shape the technologies of the future.  Like Hephaestus, he has deep parental issues that he can only solve through the act of creation and the generous application of booze.  If you waited until after the credits, you know that pretty soon, he’ll be hanging out with an actual god who also likes big hammers.

Ultimately, there’s not a single answer to “What is Iron Man 2 about?” because Iron Man 2 can’t be taken on its own.   When put in the context of Iron Man and the future Avengers films, it’s a second act in a story that’s an allegory of how we got out the cave and into the movie theater in the first place.

9 Comments on “The Age of Iron: What Iron Man 2 is Really About”