And we’re back!  Wow, that episode was fun.  I haven’t felt so close to the edge of my seat during a Lost episode since… actually, I can’t remember when.  Lost, you’re back, baby!  I’m sorry I ever doubted you.

This episode focused a lot on the idea of “fixing” people.  We recently learned that Real-Jack has given up trying to fix the world, yet Alt-Jack works the whole episode to convince Alt-Locke to let him fix him.

Question 1: Is there any chance that Real-Jack can fix Fake Locke in the Island Universe (whatever you interpret the word “fix” to mean)?  If so, how? 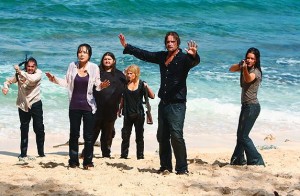 While Alt-Jack is working to fix Alt-Locke, Real-Jack is stuck on a submarine with all of his friends and a ticking time bomb.  Jack realizes that fixing this bomb isn’t going to work–the best thing to do is let the bomb run out on its own.

Question 2: Is it possible that the moral of this entire story isn’t just “whatever happened, happened,” but “whatever happens, happens”?  After all is said and done, is Lost just a story meant to teach us to “go with the flow, man”?  (If so, what do we make of the character of Jacob, who liked to think of himself as a “hands-off” guy but is clearly more “hands-on” than any other character in the show?)

Hmm, what else happened in this episode?  Oh, yeah.  Three major characters DIED.  (And one more maybe-died, but let’s save Lapidus-talk until we know his true fate.)

Question 3: True or false: In the end, Lost will turn out to be a “Ten Little Indians” plot.  In other words, do we expect everyone except Jack (and perhaps Kate) to die on the Island, whereupon Jack somehow uses his Jacob powers to make the Sideways Universe real?  (Whereupon Jack and Kate become the Adam and Eve in the caves?)

And… Question 4: What did you think of these deaths, anyway?  The first death I felt nothing, and the second two kinda-sorta made me feel bad.  Personally, I felt much sadder while watching the final Alt-Jack/Alt-Locke scene.  Matthew Fox and Terry O’Quinn acted the hell outta that.  To me, the emotions in that scene felt realer and more earned than the somewhat forced melodrama in any of the death scenes.

Or maybe I’m just sad that they killed off one of my favorite female characters after giving her nothing to do for two seasons.

Welp, see you next time!

15 Comments on “The Overthinking Lost Open Thread: “The Candidate””