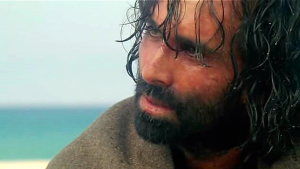 I feel like I’m in college again.  There’s a deadline looming; I’m flipping through my King James Bible, searching for quotations that I can link back to a literary text…  Now I’m desperately skimming through Wikipedia, trying to remember my Christian sacraments.  I think, “It’s not my fault I don’t have them memorized!  I was raised Jewish!  Jewish!  That’s a real handicap for an English major!  I think that should at least earn me an extension!  Shouldn’t it?”

Except there are no extensions to be had.  Because I’m not in college anymore, and I’m not busy writing some nonsense about Dubliners or Paradise Lost or the boring-ass works of Mr. Edmund Spenser.  (Yeah, I went there, Spenser fans.  Suck it.)

No, today, I’m breaking out the Bibles because writing about Lost.  Because, this week, my friends, Lost went sacramental.

So: sacraments.  Obviously I wasn’t the only one who noticed Richard’s forced baptism at the hands of Jacob the Badass Baptist, but that wasn’t the only skewed sacrament we saw this week.  Let’s go through them one at a time: 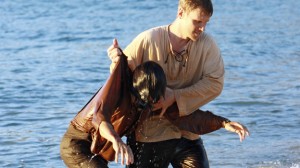 "DO YOU ACCEPT JESUS CHRIST AS YOUR LORD AND SAVIOR? WELL, DO YA, PUNK?"

In one sense, “Ab Aeterno” played the sacrament of baptism straight.  Richard’s being dunked in the ocean was a moment when he was symbolically cleansed of his sins – as Jacob said, on the Island, your past doesn’t matter.  On the other hand, this baptism was, well, weird.  Jacob literally dragged Richard into the water and tried to drown him – repeatedly.  So if Richard was “born again,” it wasn’t entirely by choice.  So much for Jacob being pro-free will. 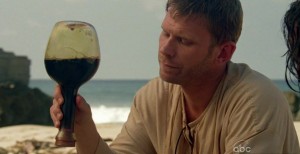 Take this and eat, for it is an obvious allusion.

Here’s another off-kilter version of a sacrament – Jacob gives Richard wine to drink but never says that it’s of his body (or of Jesus’s, for that matter).  Rather, this wine represents evil and thus Smokey’s smoke-body.  Smokey, interestingly, also gives Richard a drink in this episode, only it’s water, not wine, and Richard doesn’t take it willingly. 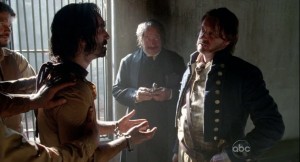 "Did you ask to be saved? See, I thought you asked to become a SLAVE. Boy, am I going to look silly at next year's priest convention!"

Here’s a really weird one.  Twice in this episode, Richard tries to confess and be absolved of his sins, and twice he is rejected: first by the Bible-stealing priest back in the Canary Islands, and second by Jacob, who says he literally can’t do it.  Richard’s final conversation with Ghost-Isabella also adds another fascinating layer to the confession story: she absolves him of his sin of “killing” her and says that he has he has “suffered enough.”  This is interesting first because Richard didn’t even ask her for forgiveness, and, second, because she has no right to make this judgment call.  (It’s not like she was ordained as a priest; how does she know that he has “suffered enough” to be forgiven?)

Then, Richard says that he wishes, more than anything, that they could be together again.  Any other show or movie, at this point, would have Isabella say, “We’ll be together in Heaven,” or something similarly maudlin and afterlife-y.  But that’s not what she says.  She says that she is always with him—now, in THIS world.  Isabella seems to be suggesting that Richard doesn’t have to worry anymore about his sins or trying to meet up with her in Heaven.  The important thing isn’t being absolved by a God or a priest and getting a ticket into some exclusive afterlife, but forgiving yourself in the here and now.  In general, this seems to be Lost’s main theme, a theme that basically defies Catholic dogma. 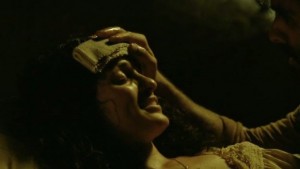 It's better than regular unction becuase it's x-treme!

We don’t actually see any real anointing in this episode, but we do see Richard applying a wet cloth to Isabella’s forehead while she’s dying.  That’s basically the same thing, isn’t it?  Sure, it is.  Instead of calling a priest to her deathbed, though, Richard tries to stop death by getting a vial of medicine, not a vial of ceremonial oil.  And, of course, he gets it by murdering a man, and he does not bring it to his wife in time.  Unction fail! 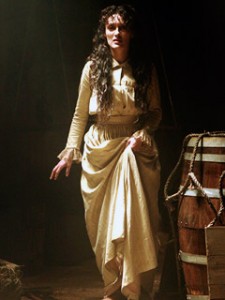 Although we don’t actually see Richard marrying his wife in this episode, this sacrament is indirectly alluded to throughout the episode.  In Catholicism, marriage is supposed to bind two people together for a lifetime for the specific purpose of procreating offspring.  Richard and Isabella thwart this sacrament in two ways: first, by not having children, and, second, by holding onto each other after “death did them part.”   Awww. 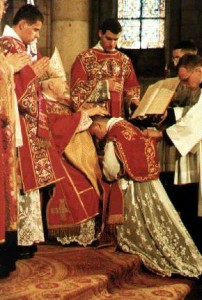 I’m going to put these two together because they are the only sacraments that are played straight in “Ab Aeterno.”  By devoting himself to serve Jacob, Richard allows himself to be “confirmed” to him.  Then, by “laying his hands” on Richard, Jacob is ordaining him one of his “priests,” an intermediary between himself and his congregation of Others and Candidates.  (The main difference between Catholic ordination and Lost-style ordination is that the act of laying on hands in this case gives Richard the gift of immortality, not just the right to wear a cool robe or a fancy collar.  So, kudos for that, Jacob.)

So we have seven sacraments, some played straight and some not.  All of this, to be honest, confuses me.  Why can’t Lost be clear about its relationship with Christianity?  Why must it play some sacraments completely straight, others sorta-kinda straight, and still others completely inverted?  This makes it hard for me to overthink, Lost writers!  Can’t you throw me a bone every once in a while?

Okay, to be fair, this isn’t the first time Lost has toyed around with Christian imagery in an equivocal way.  I’m sure we all recall the Virgin Mary statues filled with heroin and Mr. Eko, battle priest.  And I don’t know about you, but I’m still scratching my head over the saint imagery going on in that “Fire + Water” episode. 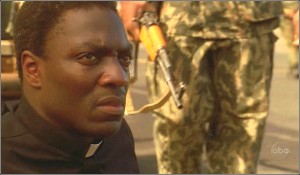 The fact is, in general, Lost isn’t clear about whether it wants to be a Christian story or not.  On the one hand, we’re being shown Egyptian imagery, smoke monsters, ghosts, Dharma, and pseudo-reincarnation.  On the other hand, we’re clearly being told a story about two dudes, one good and Jesus-y, and one evil and Satanic.  The black and white motif, we’ve discussed, evidently points to a kind of Manichean universe, and Christianity seems to me to be the most Manichean world religion.

But, as I’ve said many times before, Lost is also a show about gray vs. gray morality, too.  Jacob’s act of nearly drowning Richard in this week’s flashback shows once again that, although he may represent the forces of Good, Jacob’s not above getting his hands dirty when he needs to.  Certainly all of our favorite Losties (except Sayid, now, I guess) are neither wholly good nor wholly evil, which is one of the things most of us like about the show.

So, what, Lost?  Are you Manichean or not?  And are you, despite all of your paeans to polytheistic mythologies, a Christian show at heart?

Even if we do accept that Lost is, purposefully or not, a Christian-themed show, I’m still not clear on what KIND of Christianity it could represent.  The fate vs. free will debate—our favorite!—can easily be re-interpreted as a debate between Calvinism and more modern-day brands of Christianity.  Or you can characterize the conflict between the MiB and Jacob as a conflict between Catholicism (with its focus on mortal sins and Original Sin) and Born-Again Christianity (with its focus on faith and faith alone).  My old college buddy Dan—hey, Dan!—recently postulated that Jacob represents an Old Testament, Book of Job-era Satan (who accuses humanity and is kind of badass but isn’t actually evil), while the Man in Black is a conception of a New Testament, pure evil Devil.  That’s fun to think about, and you can turn it on its head: to the Man in Black, the Island is an Old Testament Hell (sheol), which will never be opened purposefully—once you’re in that jail, no one’s going to open that door again, so you have somehow break your way out of it.  To Jacob, if the Island must be Hell, it is a New Testament, Revelations-inspired Hell: one that will eventually be flung open for once and for all by the powers of faith and goodness (i.e., Jesus). 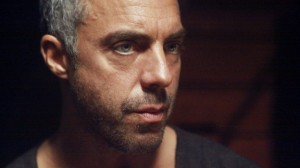 Let's throw in a picture of the Man in Black just for funsies!

Speaking of Hell, Lost also hasn’t decided what the Island represents on a metaphysical level.  This week, the Island was Hell.  Back in earlier seasons, we all thought it was purgatory.  The folks at Entertainment Weekly had a neato theory that the Island was Israel, and that the events of season 6 were a retelling of the first Holy Week.  And with Adam and Eve still rotting away in those caves (and the Smoke Monster looking kind of snake-like), the Island could still be Eden, too.  Or it could even be a kind of “reverse Eden,” where people come in corrupted but end up pure and childlike in the end.  We’ll have to see.

Frankly, I’m too tired to come up with any real answers to any of these questions, and I’m pretty sure, anyway, that Lost hasn’t fully answered them yet.  But, as usual, it’s something to think about and return to after the season finale.

Other random notes on “Ab Aeterno”: