So here we are.  The long-awaited Richard episode.  Pretty damn good, I thought.  Prett-ay prett-ay good.  I wanted it to be a leeeetle more earth-shattering than it was, but, screw it; I shouldn”t complain.  That bit where Richard, Isabella, and Hurley reenact the end of Ghost (with Hurley doing the Whoopi Goldberg part) was played to perfection.  Nestor Carbonell, you just earned yourself an imaginary cookie. 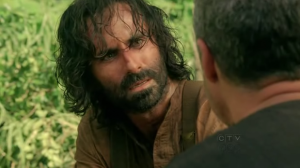 When I first saw Ricardo Alpert-o racing across Tenerife on horseback, my mind went to Dances With Wolves.  Next, when he was in the prison, I thought, “Ah: The Count of Monte Cristo!”  Then came thoughts of The Mask of Zorro, Roots, certain episodes of Blackadder… Oh, and, of course, Ghost.

Question 1: What pop culture classics did this episode remind you of, if any?  Or am I just ruining this episode for you?  If so, I apologize.

Later in the episode, we saw Smokey doin’ the ol’ “Smoke Monster Stare-Down” on Richie Alpert, back when he was known as “Ricardo” and starving to death on a slaving ship.  (You may remember a similar Smoke Monster Stare-Down from such episodes as “The 23rd Psalm” — another episode partially about Catholicism.  Hmm.)

Question 2: Can we determine now what the Smoke Monster Stare-Down is all about?  When I saw “The 23rd Psalm,” I thought Smokey left Eko alone because Eko was just that badass.  Here, though, Richard was just sitting there, cowering and praying and generally being the opposite of a badass.  Can we say now for sure that Smokey only leaves people alive when he’s able to detect guilt and ghosts on their brains?  (Vaguely related question: Can we also say now that the “white light” John Locke saw way back in season one when he looked “into the eye of the Island” was also Smokey for sure?  Or is that still TBD?)

Speaking of Smokey, the show has gone to great lengths over the past eight episodes to establish that the Man in Black is a seriously bad dude — an “incarnation of evil,” if you will.  So…

Question 3: Any ideas about what might happen if (and when?) Smokey gets off the Island?  On Island, the MiB is a Devil-figure who manipulates people into killing one another.  But, uh, people already kill each other plenty in the real world without any help from the Smoke-ster.  How much worse could he really make things out here if he escaped his prison?  (This question gets even more interesting when you consider that Lost’s Alterna-verse, which has no Island/evil-sealing cork, seems to be a pretty nice place to live in.  Or will it turn out that the Alterna-verse really is Hell, but we just don’t know it yet?)

Speaking of the “cork in a jug of wine” metaphor…

Question 4: So what’s the point of the Island, anyway?  The show, it seems to me, has put forth two possible answers.  Answer 1: The Island is the MiB’s eternal prison.  Answer 2: The Island is a game board where Jacob and the MiB’s use humans as pieces in an attempt to prove the other’s ethical philosophy wrong.

So which one is it?  Or is it both?   And, if the answer is “both,” then isn’t that’s like a prison warden spending centuries (and the lives of hundreds of other prisoners) helping one really bad prisoner learn about the inherent goodness of humanity?  I’m saying, “What’s the point, Jacob?  Why do you keep drawing new Losties to the Island?  Why is it so important to you that the Man in Black learn about free will and mankind’s capacity for forgiveness?  Is this just an ego thing with you, Jacob?  Is that it?  Or is there a concrete, non-philosophical reason you’re doing this?  ANSWER ME.”

Be sure to visit Overthinking It next Monday, when I’ll try to figure out Lost’s… shall we say, interesting relationship with Catholicism?  Yeah, “interesting” sounds about right.  See you then.