Last week’s episode of Lost was a Jack episode, so you know what that means: it’s Daddy issues time!  I don’t know about you, but I thought Lost had dropped this thread, never to pick it up again, sometime around when Locke and Sawyer strangled Locke’s dad with some rusty chains in the Black Rock.

“Lighthouse,” however, got me thinking that not only are the Daddy issues back at center stage now in season six, but that maybe they’ve been the main theme of the show all along.  The way I see it, Jack’s quest to resolve his relationship with his possibly-evil ghost dad—whether by reconciling with him or destroying him—will resolve his faith vs. science issues, his fate vs. free will issues, and his relationship with Jacob and the Man in Black.

Maybe it’s just me, but have any of the rest of you noticed the apparent lack of dads in this final season of Lost?  Back in seasons one and two, ghost-Christian Shephard was playing hide-and-go-seek with his son; Kate decided she couldn’t bone Sawyer because he reminded her too much of her own dad (whom she murdered); Sun was butting heads with her dad while Jin was trying to forget about his; Claire was being shut out by her baby-daddy; Locke got his kidney—and heart—cut out; and so on and so forth.  The third season brought us Ben’s own special brand of Daddy issues, but, by the fourth, they were basically gone and forgotten.  (Well, except for Miles’s little interlude with his bad dad, although that storyline didn’t seem terribly developed to me.)

Now, in this final season, dads are being talked about constantly, yet we’ve seen very few.  LA X saw Jack dealing with his father’s death, yet, once again, the body was missing in action.  What Kate Does saw Kate back in her fugitive mode, likely fleeing punishment again for killing her father, also unseen.  The same episode saw Claire giving birth to Aaron without his daddy at her side, and even his almost-adoptive father ran away before Aaron could be born.  In The Substitute, we saw a picture of Locke’s dad, but not the man himself, making us wonder if he and Locke are truly buddies in the sideways Universe and how that affected Locke’s early life.  And, as I said in last week’s Open Thread, Christian Shephard haunted every second of Lighthouse, though we never got to see the man in the flesh (or creepy spectral form, as it were).

The main theme, then, seems to be not “Daddies” but “missing daddies.”  We got the impression from this week’s flash sideways that Jack himself was turning into one of these, too. 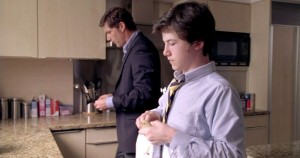 The cats in the cradle and the silver spoon...

What makes Lighthouse different from all the other episodes I referred to above is the point of view.  If most of Lost’s father-oriented episodes are Oedipal (but without the mom-sex), most of those look at the Oedipus story from Oedipus’s point of view.  Jack wants to kill/get over his dad; Locke has to kill HIS dad; Sawyer wants to kill Locke’s dad as a surrogate for HIS dad.  Sun wants to destroy her dad; Jin metaphorically killed his dad by pretending he was dead; Ben and Kate wanted to kill their dads and did it.  I recently re-watched Flashes Before Your Eyes, and there’s even some indication that Desmond’s desire to win Penny’s dad’s boat race is just a way for him to metaphorically “defeat” his own father, who left him to raise his siblings by himself.  Looks like everyone hates daddy.

Lighthouse, on the other hand, focuses on the father-son dynamic from the father’s point of view, which is something we haven’t really seen explored since the Others took Walt from Michael back at the end of season one.  In this episode’s flash sideways, we see that the father-son conflict isn’t necessarily a fight between Evil Dad and his Good But Insecure Son.  In this episode, yes, Jack was partially to blame: he sees his son only one weekend a month, he seemed not to be paying any attention to his son’s feelings or desires, and there was some indication that he might have put too much pressure on David to succeed where Jack hadn’t.  But what made this episode different from so many other Jack episodes—and from many other TV shows—is that the son is clearly somewhat at fault, as well.  As Jack’s mom says, just as Jack cast his father in his own mind as an intimidating demon, Jack’s son is doing the same.  And, just as Jack is a sympathetic human character despite his self-centeredness and angst, maybe Christian Shephard was a sympathetic human being, too.  I think alterna-Jack came to that conclusion in this episode: that maybe his father, while not nearly perfect, was doing the best that he could.

So there’s today’s psychoanalysis—but what does this all have to do with faith and science and free will and fate and so on?  Well, here’s my theory: my theory is that Jacob is now being presented as not only a God-figure but a father-figure, and that Jack is going to turn out—metaphorically, of course—to be his Son.  Smokey, meanwhile, will turn out to be another Son-figure—the spurned son, or Lucifer—to Jacob, too. 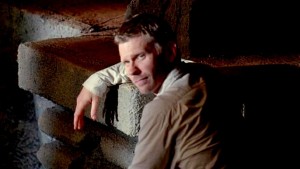 Just like your dad, Jacob spends his free time tinkering with the pool.

I present to you exhibit A: alterna-Dogen’s speech to Jack at the end of the episode.  They’re at an audition—their sons are, appropriately, “Candidates”—when alterna-Dogen says, “It’s hard to watch and not be able to help.”  And: “Your son has a gift.”

Something about the way he said this makes me wonder if alterna-Dogen has some of his memories of being regular-Dogen, and that he (or the writers) are insinuating that the Others’ job was to watch Jacob’s Candidates but not help them.  But even if those lines don’t apply to the Others, they clearly apply to Jacob: The contraption in the Island’s lighthouse shows that Jacob was, like a parent, watching Candidates like a parent watching over his kids.  Jack, being a Candidate, has some kind of “gift,” yet, beyond one little touch, Jacob was not “able to help” him during the early parts of his life.

At the end of the episode, Jacob talks to Hurley about two types of people—the type that, like Hurley, you can just order around, and the screwed-up kind, like Jack, that you need to let flounder so they can find their own way.  I might be crazy, but it sounded the way a parent would talk about their kids.  Like: “Hurley, you’re the good one.  You do what I say.  Jack’s a good boy, too, but he’s a late bloomer.  He needs some time to grow up for himself and figure out how special he is.”

Jack, of course, has a temper tantrum when he finds out that he’s had this nice god-figure caring about him all these years.  I read a comment—I think it was at the AVClub; I don’t remember—where someone was complaining that, by destroying the mirrors, Jack was acting like a whiny 14-year-old boy instead of a nearly 40-year-old man.  I agree completely—and I think this was by design.  The show was suggesting that Jack freaked out because all of his beliefs about his place in the world—which were likely formed when he was fourteen or younger—are now being demolished, one-by-one.  We are meant to think, “Aha!  Jack is having a hard time having faith in good-father Jacob and in himself as an agent of free will because he was taught by his bad-God father Christian that he shouldn’t have faith in anything and that he was fated to fail.”

[Aside: I was going to say that this was another example of TV insinuating that all atheists lack belief and believe in science because we all had bad childhoods boo-hoo.  But, then, Jack’s mirror image, Locke, didn’t end up any better off than Jack did.  Both Jack and Locke had not-so-nice childhoods and not-very-nice dads, yet their reactions were polar opposites.  Jack clung to science and spent his life fixing everything to prove he was “better than” even though he secretly knew he would never measure up, while Locke took up his Island-based religion and clung to the hope that he was fated to be “special-er” than anyone else.  But let’s not beat around the bush here: both characters are clearly fucked up.  So, I thank you, Lost writers, for being equal-opportunity offenders.  Atheism and religion: both bad when adopted for the wrong reasons.  I guess I don’t mind that moral.] 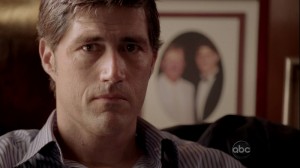 If Jacob is a good-father figure, then what about Smokey?  Personally, I think we have to start seriously considering the fact that Smokey might be Jacob’s kid, either literally or figuratively.  Last week some of you were talking in the comments about how “the rules” were to some kind of god-game—but what if “the rules” are rules that Dad made for his rebellious son?  Consider:

JACOB: “Smokey, you’re grounded!  No leaving the Island for another 2000 years.”

SAWYER: “What is this?  What are these names?”

SMOKEY: “Oh, my dad wants these people to protect the Island or something.  Whatever, like this shithole needs protecting.  Ugh, my dad is such a phony.  He’s like, ‘I’ll love you no matter what, son,’ but then he goes around pushing everyone to do what HE wants.  I swear, the first chance I get, I am so out of here.  Hey, you should come with me!  We’ll have our own cars, stay out as late as we want…  What do you say?  You in?”

The only question is, if Jacob is the “good dad” to Smokey’s “bad son,” then why did Jacob piss on Ben when he asked for some attention and love in The Incident?  A nice dad wouldn’t snark, “What about you?” would he?  I still can’t figure that part out.

Other random notes on Lighthouse:

[What do YOU think about Lost’s daddy issues?  What is the relationship between Jacob and Smokey, anyway?  And where does GhostChristian fit into this?  Let loose in the comments.]