[Disclaimer: As you can see, I’ve titled this piece “Season 6 Episode 3” even though everyone else in the world is calling this “Episode 604.”  The reason for this is that I erroneously interpreted the season premiere as one episode when, apparently, it counts as two.  I hope you can enjoy this piece, regardless.] 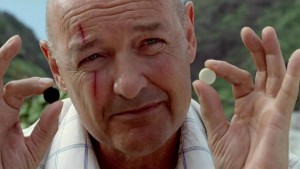 Lost has always been a show about dichotomies, but maybe never more so than in this week’s episode, “The Substitute.”  In this episode alone we saw dramatized all of our favorite dualisms.  To wit:

And, beyond that, of course, we have the whole “two timelines” thing going on, allowing us to see two versions of every character operate side-by-side.  So we see Evil Island-Ben looking into the grave of one of the many men he killed and Not-Evil-Evil-But-Still-Kind-of-a-Prick-European-History-Teacher Ben who wants to grab a cup of tea with Locke, his new buddy.  The Bad Luck Hurley of 2007 is now being contrasted with Good Luck Hurley, the easy-going multi-millionaire from 2004, and Rose, who once was the big lover of faith and hope, is now a grim realist.  In fact, we now have two versions of every character, except for Locke, who, being special, gets his very own trinity of selves: Dead Locke (who I like to think of as The Father), Alterna-Locke (who I like to think of as Dead Locke’s spiritual “son”), and Un-Locke (the Unholy Spirit).

Anyway, except in the case of the three Lockes, we’ve seen a lot dichotomies in the last few seasons of Lost, and now it’s coming out big time.

The main question that arises when we think about these dichotomies, of course, is, “Which side is going to win?”  Are the writers ultimately going to side with science or faith?  Fate or free will?  Jacob or the Man in Black?  The 2007 Universe or the 2004 Universe?  And so on.  These are all forms of the same kind of question.

But is that the right kind of question?  My theory for a while has been this: Lost’s writers have been tricking us all along.  They have been manipulating us–nearly forcing us–to look at the world they’ve created as a Manichean Universe, a big ol’ backgammon board with two sets of pieces and a decidedly “black and white” world view.  But this is all a ruse.  In the end, my bet is that Lost’s world isn’t Manichean at all.  It’s a gray, gray, gray, gray world.

We’ve seen this “grayness” in earlier seasons.  For all Lost’s talk of “good guys” and “bad guys,” for instance, it’s still incredibly unclear which side anyone is on.  For the first four seasons, we were led to believe that “fate” was a religious term, and that “the Island” was making things happen using some magical, spiritual force.  Then, in season 5, we found out that “fate” was scientific all along—it was caused by time travel and electromagnetism.  Thus even “reasonable,” scientific characters like Jack and Faraday were forced to admit that destiny, in fact, was real.  In the character of Jack we see the various dichotomies duke it out almost every episode: one day he’s the Man of Science; the next, the Man of Faith.  In the second half of season 5 he was both at the same time: he wanted to use science and his own faith in himself to alter the course of history by blowing up a nuclear weapon.  And last episode we learned that Jack currently is a man unmoored; he doesn’t use medical science to help Sayid, and he has no faith in himself, in Dogen, or in humanity.  So is Jack the Man of Science or the Man of Faith?  All of the above, and none of the above.

So good and bad, light and dark, science and faith, fate and free will have all been overlapping, somewhat, since at least the fifth season.  The show, in other words, is slowly shifting from one based on black and white thinking to one based on blurry grayness.  Maybe I was looking too hard for evidence of this shift, but I did find some this week in the character of Helen.  This episode, “The Substitute” focused on a series of dichotomies that are all related.  On one side, we have “Imprisonment,” “Fate,” “Reality,” “Acceptance.”  On the other side is “Freedom,” “Free Will,” “Faith,” and “Hope.”  The first side is represented by the Man in Black, Sawyer, and, interestingly, the AU versions of Locke and Rose, while the second side is represented (in this episode) by AU-Hurley and (in our memories) by Original (Now Dead) Locke.

Tonight, however, we saw a character who found a middle ground between these two poles: Helen.  That flash-sideways scene where she and Locke converse in the kitchen was not only incredibly moving, but it also might give us some insight in where the show is ultimately headed.  To refresh your memory, here’s what happened: Locke, echoing Alterna-Rose’s “accept your life” speech, tells Helen that he’s “sick of imagining what [his] life would be like” if he could walk.  (Interesting line, from a meta-literary perspective, ain’t it?)  He then says that there are no such things as miracles—so don’t go waiting for him to start walking again, Helen.  So far, we’re firmly in Lost’s dichotomy land: at the beginning of the episode, Locke was Mr. Free Will, Faith, and False Hope.  By the end of the episode, he’s forsaken those things in favor of fatalism, reality (or “science”), and acceptance.  Two sides: one light, one dark.

Then comes the interesting part.  Helen says, “There are miracles, John.  And the only thing I was waiting for was you.”  She and Locke rip up Jack’s business card and kiss, and your humble OTI writer goes all misty-eyed. 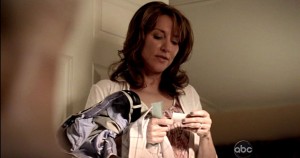 Katey Sagal makes everything better. Do not deny it.

It’s a quick moment, but it says so much.  Let’s break it down.  Helen says she believes in miracles, but she rips up Jack’s business card (which represented the hope that Locke might walk again, by some miracle of science).  If the “miracle” she’s referring to here ISN’T the potential miracle of Locke being able to walk again, what is she talking about?

Well, her love for John, obviously!  (Aww…)  Their relationship, which did not work in the original Lost universe, is a real life miracle here.  In this one sentence, Helen blurs Lost’s old dichotomies.  She has faith, not in religious miracles or the power of science, but in Locke.  Yet, at the same time, she is a realist in that she understands that Locke will not dance at their wedding.  She accepts Locke the way he is, yet that acceptance isn’t a form of nihilistic fatalism.  No, her acceptance of Locke comes from her love for him, which is simultaneously fated (after all, they fell in love in the original universe, so it seems some force is working to bring these two together) and a free choice (because in the other universe, she decided not to take up his offer of marriage).  In two sentences, Helen synthesizes fate and free will and reason and faith all in one romantic mélange.  Good job, Leela!

The scene with Un-Locke in the cave with Sawyer blurs the strict lines between the dualities, as well.  I don’t know about you, but when I saw The Incident, I separated Jacob and the Man in Black like this: Jacob was light, good, the master of free will, and full of faith and hope, while the MiB was dark, evil, a believer in fate, and full of cynicism borne out of his experience with humanity.

But in Tuesday’s episode, the Man in Black did a few things that changed my views.  First, he showed Sawyer Jacob’s list of candidates, which did prove that Jacob caused the Losties to land on the Island.  Second, he told Sawyer that Jacob’s “touch” was a subtle manipulation—another way of ensuring that Sawyer got to the Island in 2004.  Now, whether the MiB is lying or misinterpreting Jacob’s actions is up for debate, but this all does suggest that, for all of Jacob’s talk of “progress,” “free will,” and “the choice is yours, Hurley,” he WAS the man behind the curtain in some ways, pulling the strings of fate toward some end he predetermined a long, long time ago.  Maybe Jacob represents fate and free will at the same time, and, if that is the case, he might also be good and evil at the same time, too.  We’ll see.

Lost has gone out of its way to emphasize that it’s a show about two sides, like in a game of backgammon.  According to the characters, there’s light and dark, good people and bad people, fate and free will, science and faith, things you can do and things you can’t, and so on.  The thing is, this is what the characters SAY, but it’s not what the show DOES.  In practice, the lines separating the two poles are more blurred than they seem, and I, for one, am still holding out for an ending that obliterates these false dichotomies once and for all. 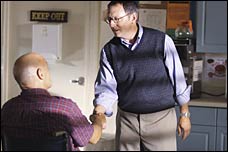 You know who I want to see show up in the Alterna-verse? Mikhail.

[What did you think of The Substitute?  Let loose in the comments section below!  And be sure to come back Wednesday for our new Overthinking It feature, The LOST Open Thread!  It’s like our regular Open Thread, only LOST-ier!]