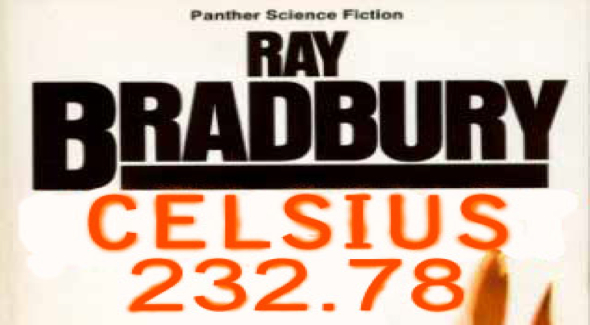 “Weights and measures may be ranked among the necessaries of life, to every individual of human society. They enter into economical arrangement and daily concerns of every family. They are necessary to every occupation of human industry, to the distribution and security of every species of property, to every transaction of trade in commerce, to the labors of the husbandman, to the ingenuity of the artificer, to the studies of the philosopher, to the reaches of the antiquarian, to the navigation of the mariner and the marches of the soldier; to all the exchanges of peace and all the operations of war.”

A note on sources:

For the factual background of this article, I relied heavily on an article by Hector Vera at the New School for Social Research. It’s short, interesting, available here and well worth a read.

For pop culture uses of the English System of Measurement, I tried a crowdsourcing experiment, calling on friends and family to help me list instances of popular culture featuring units of measurement. Dozens of them responded to a query on Facebook or the hijacking of otherwise pleasant conversation. I am in their debt.

Since its introduction during the era of rationalism that followed the French revolution, the decimal metric system has spread to the vast majority of the world. Universally standardized weights and measures, easily converted even by those who can only multiply and divide by 10 provide obvious advantages to international science and trade. By the mid 20th century, the world was basically divided with the UK, its Commonwealth and the USA using the English standard system and everyone else on metric. Today, only three countries continue to reject the metric system: Burma/Myanmar, Liberia and the United States of America.

A quick look at those three countries:

Obviously, the US is a bit of an exception here, if for no other reason than that we finished our civil war a long time ago.

Thomas Jefferson first proposed a decimal system of uniform measurements and a standardized decimal currency during the Washington Administration. We adopted the currency (and if you’ve ever tried to make change in England, you know how much we owe him), but we didn’t buy the measurements. Congress passed laws calling for metrication in 1902 and 1975, but in neither case was the change mandatory and in both instances the American people (along with federal entities like NASA and the Post Office) ignored them.

Scientists have been calling for the US to adopt the metric system for centuries, but they’re also calling for us to do something about global warming and we’re used to ignoring them. On the other hand, American industry is calling for change as well. When car parts are shipped in from dozens of metric countries, thousands of conversions must be performed, increasing costs and creating opportunity for error. Most recently, the failure to convert inches and centimeters correctly led to the loss of a $125 million Mars orbiter.

More than 200 years after the American Revolution and after Jefferson laid out a workable system, we’re still awestruck Tory tailors, using measurements based on the foot and waist measurements of ancient kings. Only when buying large quantities of Coke or Pepsi are we willing to deal with the metric system. Why?

1: Historical. When the US was ready to choose a system, metric wasn’t yet an international standard. England was also a major trading partner for most of our history, so maintaining a similar system then made economic sense. By the time metric became the obvious the way to go, we were already too invested in our own system. In modern times, our economy has been so dominant that we’ve been able to force the rest of the world to deal with us.

2: Economic. Before globalization took off, changing America’s system of weights and measures meant that the cost to retool America’s industrial capital outweighed the benefits of joining the global system.

3: Political. Metrication has been almost universally driven by central governments and the United States, ever wary of encroaching federal powers, has never had the political will to change. Citizens of Brazil, Portugal and Japan rioted when those countries made the change. 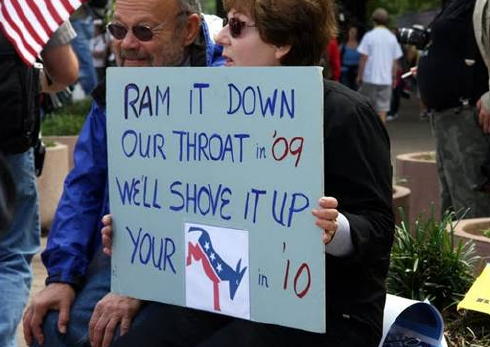 The tea at this couple’s tea parties will be measured in pints.

4: Cultural. Here, Vera offers the idea that the US’s notorious sense of exceptionalism, evinced in our refusal to participate in the Kyoto Treaty, the International Criminal Court, etc., has left us saying: “we don’t wanna.” He doesn’t mention our abhorrence of all things French, but he probably meant to.

All and each of these are cogent arguments, but even when taken together, but something’s missing. Many other countries have faced similar challenges, but all of them have overcome them and metricized. If there were 10 or 20 countries still dodging metric, that might make more sense, but there has to be a deeper reason why Americans hate the metric system.

Earlier in his article, Vera includes a song written by the International Institute for Preserving and Perfecting Weights and Measures (IIPPWM), an anti-metric group in the 1880s. Political songs were a popular form of communication in those days, but in the song itself, we can see a conservative attachment to the old system that still permeates our culture.  Vera claims that this group and its allies were attempting to stop the metric system in order to preserve biblical measurements like the cubut, but in the following song, religion plays second fiddle to racial and nationalist sentiment. 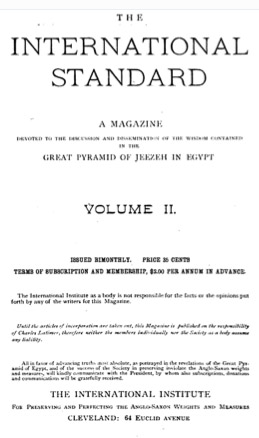 In the above image, the group seems to exist to promote a Masonic belief in the measurements of the Great Pyramid.

They bid us change the ancient “names,”
The “seasons” and the “times,”
And for our measures go abroad
To strange and distant climes.

But we’ll abide by things long dear,
And cling to things of yore,
For the Anglo-Saxon race shall rule
The earth from shore to shore.

Then down with every “metric” scheme
Taught by the foreign school.
We’ll worship still our Father’s God!
And keep our Father’s “rule”!

A perfect inch, a perfect pint,
The Anglo’s honest pound,
Shall hold their place upon the earth,
Till Time’s last trump shall sound!

Then swell the chorus heartily,
Let every Saxon sing:
“A pint’s a pound the world around,”
Till all the earth shall ring,

“A pint’s a pound the world around”
For rich and poor the same:
Just measure and a perfect weight
Called by their ancient name!

Uncomfortable Anglo-Saxon language aside, this song clearly shows that, if inferior to metric in every other way, the English system makes for better poetry.

Imagine the scientific riposte:
Replace the inch, we say to thee
Make each equation neater
For every scientist in the world
Will use the same centimeter

It just doesn’t work. Polysyllabic words, including almost every unit of measurement in the metric system, simply don’t have the punch of their monosyllabic counterparts in the English system. That, and they’re much harder to rhyme.

Courtesy of a Facebook poll of my friends and family, let’s take a look at instances of measurement in the popular culture and make a few comparisons. In each instance, I have converted the English measurement into its metric equivalent. I think it becomes immediately clear that the English system works better than its Frenchified intellectual elitist cousin.  You’ll note that time is not included as a measurement here, both because there’s a single worldwide system (which the Anglo-Saxons at the IIPPWM opposed) and because there are simply too many instances of time playing a factor in music or narrative to name them all.

41 Comments on “America’s Sacrifice: How the USA Saved Popular Culture by Avoiding the Metric System”