Is it cold in here, or is it just the bitter windchill cutting across the American Northeast? Or did I just answer my own question? Maybe I should shut the window and OPEN up a THREAD, perhaps?

Two items of note this week: first, the 2010 Oscar Nominations were announced on Tuesday. Avatar and The Hurt Locker both have 9 nominations, ranging from Best Sound Mixing to Best Picture and Best Director. James Cameron and Kathryn Bigelow going head to head – talk about drama. Fortunately, they’re at least on speaking terms; Will Ferrell and Mo’nique have yet to reconcile.

Question: A movie about a Hollywood couple who divorces, then goes on to direct two movies both of which are nominated for Oscars, gets nominated for an Oscar: too meta, or not meta enough? 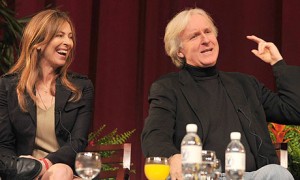 Oh, Jimmy; it's so funny when you pretend you can hurl lightning.

Second, a big game of American (that is to say, “padded”) football will be played this Sunday: the AFC/NFC conference championships, colloquially known as the Super Bowl. The Super Bowl ads, typically some of the most expensive commercials sold throughout the year, continue to draw controversy, with Tim Tebow’s anti-abortion ad, as well as ads from CareerBuilder and GoDaddy, already making headlines. Even more shocking? The two teams with the best regular season records are playing in the Super Bowl! You know how rarely that happens?

Question: Do you know how rarely that happens? Without consulting Wikipedia? 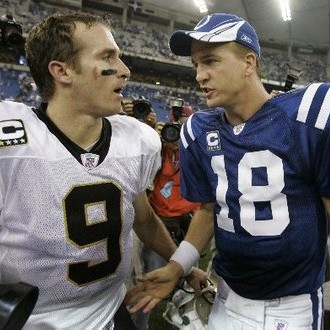 You think they'll let me star in commercials if I win this Super Bowl, Peyton?

In a postscript, can someone explain what’s going on with Overthinking It’s Facebook page? We’ve gained 800 fans in the last week and it’s just not slowing down. We don’t want it to stop, but we’re sort of scared of where it’s leading us. Anyhow, if you want to say that you were a Facebook fan of Overthinking It “back when it was still cool,” join soon. At this rate, we’ll have 35,000 fans by the end of 2010 and then it’s just going to be a mess.

Do you have answers regarding Facebook? Perhaps you can share some Oscar predictions? Care to lay a wager on the Super Bowl? Or have we once again missed that important news that you crave so much? Sound off in the comments, for this is your … Open Thread.