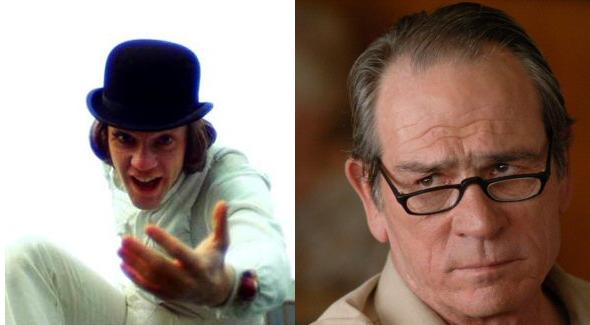 That is no country for old men. The young
In one another’s arms, birds in the trees
– Those dying generations – at their song,
The salmon-falls, the mackerel-crowded seas,
Fish, flesh, or fowl, commend all summer long
Whatever is begotten, born, and dies.

One thing I could never stand was to see a filthy, dirty old drunkie, howling away at the filthy songs of his fathers and going blurp blurp in between as it might be a filthy old orchestra in his stinking, rotten guts. I could never stand to see anyone like that, whatever his age might be, but more especially when he was real old like this one was.

Comparing A Clockwork Orange to No Country for Old Men takes no more effort than focusing a pair of binoculars. We have two fuzzy images on either side of us: Burgess’s dystopian future, as viewed through the past (1962), and McCarthy’s blood-soaked past (1980), as viewed in a contemporary novel (2005). But dialing the focus bit by bit until the image adjusts, we see that we’re actually examining the same time period from two different perspectives. The 3-D effect seen in binoculars comes, as with human eyes, from overlaying two images from different angles. Thus, too, does examining this chaotic time from two different viewpoints give us clarity.

(I make reference to Burgess and McCarthy’s visions throughout, even though I’ll be focusing primarily on the films – Kubrick’s and the Coens’ adaptations, respectively. Most critics consider these movies to be unusually faithful to their source material, however, and in any case they’ve reached a wider audience)

Real Horrorshow
A Clockwork Orange begins with one of the most sinister opening shots ever conceived: the camera boring straight into Malcolm McDowell’s unsympathetic leer. As Alex, the leader of a pack of teenage hoodlums, he’s getting jacked up on drug-laced milk (m-plus or molokko) before sauntering off into the night to savagely beat strangers into unconsciousness. 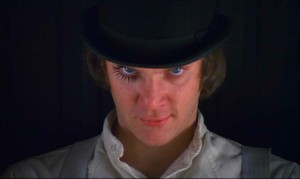 A bit of the ol' ultraviolence.

The gang’s first victim is a drunk old Irishman, whose rendition of “Molly Malone” they applaud sarcastically before kicking him in the guts. Next they come across a rival gang raping a girl in an abandoned theater. The girl escapes in the ensuing melee, and we (the audience) get a bit of hope. The girl got away without being raped! Sure, Alex and his droogs are callous thugs, but perhaps they share one or two of our gentler liberal sympathies.

Then they drive out into the country, break into a writer’s house, cripple him with beatings and rape his wife. Ah. Right.

As a capstone on the evening, Alex returns to the decaying block of flats where he lives with his parents. Getting ready for bed, he pops in a micro-cassette and cranks up a bit of the ol’ Ludwig Van: 9th Symphony, 4th movement.

Alex deLarge does not draw much sympathy. He rapes and assaults. He destroys things just to hear the crash. He beats and terrorizes his so-called friends. And he lies to his parents. But he likes Beethoven. Did Burgess throw that last bit in just to be contrary? Or does it all spring from the same source?

Alex, we must remember, is young. Immediately after sleeping off last night’s ultraviolence, the next person he speaks to is his corrections/truancy officer, Mr. Deltoid. Alex is young enough that he must still account to institutions – his school, his parents – for his time. He has no sense of the consequences of his actions: he reacts with disbelief when told that he’s accidentally murdered a woman and is now due for a long stretch in prison. Alex is a boy.

Alex, the most delinquent of juvenile delinquents, respects power more than anything else. He recoils from evidence of weakness, like the old age and genteel manners of his victims. But he quashes his ultraviolent ways without a hiccup the second he steps into prison. He never talks back to his guards, beats up the other prisoners or makes wise in the chapel. Why? Because in prison, the institution has the power. Alex respects that. Alex has a sixth sense for where the power lies in a given scenario: observe how instinctively he beats up Dim and Georgie in order to retain control of the gang. He wants power – raw, virile, ceaseless power.

Adolescence is when we start forming our opinions of how the world Should Be. Alex may look like a shiftless thug, but he actually has a clear and rigid code of ethics: might makes right. The strong should subjugate the weak. Note how, after assaulting Dim and Georgie to get them back in line, he goes on to support their original plan to rob the health farm. Note how his reaction to the gang’s first victim – the drunk Irishman – is disgust at the man’s age and incomprehensibility. Note how quickly he becomes subservient around Mr. Deltoid, his parents and the officers in prison: he’s no longer the strong one, so he ducks his head and knows his place.

Finally, note Alex’s passion for Beethoven. Alex likes classical music, sure, but it’s not gentle chamber pieces: it’s the power and bombast of the Ludwig Van. He likes Beethoven’s 9th, not Haydn’s 101st.

The Punishment Element
So we have an adolescent like Alex who has started forming his opinions of right and wrong. These opinions are, frankly, monstrous. How do the institutions of society deal with such a beast?

Educating him should be the first call, but education doesn’t seem to work. Alex lies his way out of going to school, complaining of a “pain in the gulliver.” His parents don’t seem convinced, but they’re powerless to stop him: his mother, hearing of his staying abed, deflates and returns to breakfast. The truancy officer, Mr. Deltoid, would rather lord his power over Alex, wheedling and assaulting him by turns. We never get a sense of what the schools of London look like but, given the condition of other public buildings of the time, it can’t be that effective.

Imprisoning him is the next step. But Alex has no problem insinuating himself into the prison power structure, becoming an aide to the chaplain. He’s able to game the system. He knows when to stay quiet and when to speak out, which he does at just the right moment to nab himself a ticket to the Ludovico Technique. Furthermore, we hear a constant refrain through the last half of the film on how British prisons are failing. They’re overcrowded; they’re breeding grounds for brutality; if the current Government doesn’t do something about them they’ll lose the next election; etc. So prison isn’t doing it either.

Does the social order have any solution for a terror like Alex? Just one: the Ludovico Technique, a form of torture which relies on forcing an association between evil acts (violence, rape, voting for Nazis) and a near-death illness. Alex is repeatedly brought to the point of nausea and despair with his eyes pried open until he’s rendered unable to attempt violence without collapsing, helpless. Society has responded to Alex’s monstrosity with a monstrosity of its own.

If the criminal justice system can’t handle a thug like Alex except by rewriting his psyche through torture – the same thing Alex does to his victims, in other words – it has no solution at all. The institution cannot handle a boy like him. 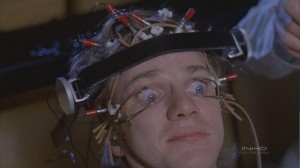 What sort of nightmare future is this, where torturing prisoners becomes acceptable?

5 Comments on “What’s The Matter With Kids Today?”