So last week, I was on a luxury cruise. And sitting in a hot tub, watching the Pacific Ocean roll by, mulling over what flavor of margarita I should order next, I felt a tremendous sense of peace.

For the first time in years, I was safe from the living dead. 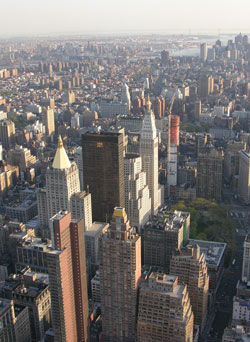 This is like Hometown Buffet for the living dead.

You see, I live in Manhattan. New York has many things going for it–world-class museums, vibrant nightlife, and a subway system that you are legally allowed to pee in (I’m pretty sure). But one major disadvantage to living here is that I will most likely be devoured by flesh-eating zombies.

Think about it. All pandemics hit the major urban areas first and hardest. That was true even in the days of the Decameron, in which the frame story involves young Florentines fleeing the Bubonic Plague to a villa in the countryside. But when the zombies hit Manhattan, the odds of me getting a Metro-North ticket out of here are pretty slim. I’m probably going to end up dashing across a bridge, carrying my son and my XBox on my back, trying desperately to escape the tristate area before it becomes the DIEstate area. But I might not even get that far – in the pseudo-zombie film I Am Legend, the government quarantines Manhattan and blows up the bridges.

I could, of course, just stay put. If I lock my front door, I’m pretty sure the zombies aren’t getting in. (I live in East Harlem, where we take front doors seriously.) I’ve got plenty of canned food, and I could get plenty of clean water out of the tap before that goes kaput. I figure I could make it a month or two, no sweat. But staying put is really gambling that the government will be able to turn the tide and fight back the zombie menace, or release some sort of airborne cure, or organize some sort of massive rescue effort. And although I’m a proud Democrat, and I believe in the government’s ability to accomplish many things, I don’t have much hope that FEMA can take on a zombie horde before I run out of Easy Mac.

Actually, the zombies may never have a chance to get be. I wouldn’t be surprised if the military panicked and fire-bombed the entire city. I’ve seen Outbreak.

So living in New York, I’ve gradually come to accept my doom. The cruise ship was another story. 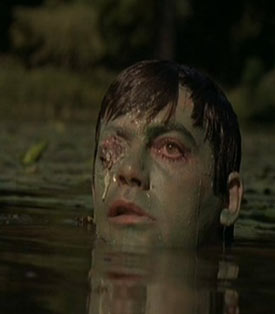 Should have waited an hour after eating braaaaaaains...

It is universally accepted that zombies don’t swim. I gleefully imagined the ship parked in New York harbor, with me on the deck taunting the hordes with my juicy, overthinking brain (in the fantasy, I have shaved my head for maximum taunting). I watch a seemingly endless stream of the living dead pour out of the financial district, stumble across Bowling Green, and fling themselves into the ocean, like so many decomposing lemmings. The zombies wouldn’t die underwater, but many would get tangled in the muck/industrial waste that forms the bottom of the harbor. In time, the zombies would form a massive pile at the shoreline, so that the new zombies would have to crawl over the squishy, bloated backs of the old zombies before they too rolled into the cold surf.

I suppose eventually, the zombies might potentially fill in all of New York harbor, like a writhing, moaning landfill. I can see myself standing on the Pool Deck, calmly watching their mad struggles as I sip my drink, perhaps playing an idle game of shuffleboard to pass the time. And then, finally, when the accumulated mass of a million zombies has reached the ship, so that I can hear their gray fingers clawing across my steel hull, I simply fire up the propellers and move the damn thing another hundred feet out.

Am I enjoying this fantasy too much? Is this weird? 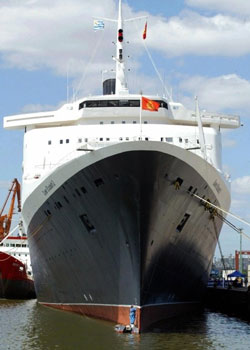 This thing makes a Hummer look like a Volt.

But let’s get serious for a moment: there are a lot of practical problems to living on a cruise ship indefinitely. For starters, fuel. The Queen Elizabeth II probably has one of the largest tanks of any ship afloat, since it has to cross the Atlantic without running dry. According to this fact sheet, it consumes an ungodly 18.05 tons of fuel PER HOUR. One gallon will take it 49.5 feet. Amazingly, the ship holds enough gas to sail at top speed for 10 days, traveling about 7,800 miles. But after that, not only can’t the ship move anywhere, none of its mechanical systems will work. No lights. No fresh water production. No ice for the drinks, and no heat for the hot tub.

Of course, you probably wouldn’t cruise at top speed for ten days straight. You could anchor offshore, and just run the engines occasionally to make fresh water. Assuming you could pack it with nonperishable food before you cast off, you’d be set for months, if not years.

Except for one thing: pirates. You think piracy was a problem in 2009? After the zombie apocalypse, EVERYONE with a boat is going to be a buccaneer, sailing the high seas in search of booty. But in this case, “booty” means “food.” (Ironically, Pirates Booty will be more valuable than doubloons.)

A luxury cruise ship, sitting at anchor within sight of land, is going to be an irresistible target. The boat is going to be absolutely swarmed with would-be looters, like an antelope carcass in the Serengeti. You’re going to have to spend all day picking off desperate refugees trying to climb onto the Lido Deck, which is really not in the spirit of a luxury cruise. 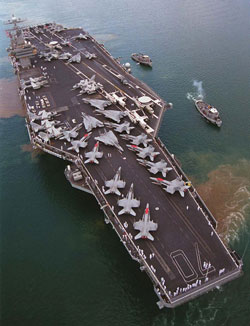 This is the gold standard in post-zombie apocalypse living.

However, there’s another type of vessel that solves both these problems: a Nimitz Class aircraft carrier. The 10 Nimitz boats are nuclear powered, capable of running for 20 years without refueling. Think about that – you could stay out in deep water for two DECADES, enjoying electricity, hot water, and whatever DVDs the fine men and women of the US Navy had brought with them before the zombie apocalypse. And as for potential pirates, first of all, you can stay out in the very most remote parts of the ocean. Most would-be looters aren’t even going to be able to make it that far away from shore. And for those who do try and start something, you’re on a goddamned aircraft carrier. That thing is armored plated, and probably full of assault weapons. I’m not saying that determined pirates won’t give it the old college try, but you will be a match for pretty much anyone, short of other military craft who really really want those DVDs.

However, I have to dismiss the Nimitz plan for one simple reason. There is no way you, me, or any private citizens are going to be able to seize control of an aircraft carrier. I’m pretty sure those things are  well-defended. And when civilization starts crumbling at the seams, security is going to be of the “shoot anyone who comes within 200 feet of the pier” variety. Actually, what few carriers are actually on US soil at the time are probably going to cast off pretty quickly, sticking around just long enough to take aboard the President, Congress, and Meghan Fox.

So a cruise ship isn’t prepared to support itself for long periods of time, and an aircraft carrier is too hard to come by. Are you ready for my brilliant solution?

We prepare our own zombie survival cruise ship. Call it the HMS Romero.