R&B singer Chris Brown has been something of a pariah since the Rihanna assault incident earlier this year. He’s back with a new album, and if you take a look at the cover, it will come as no surprise to our readers that it caught my attention: 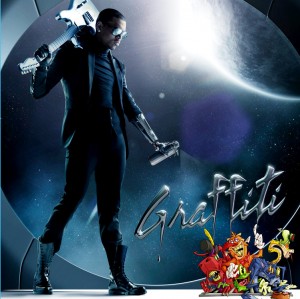 Yup, that’s Chris Brown with what appears to be a Terminator-esque metal endo-skeletal hand, not to mention the liquid metal T-1000 spelling the name of the album in the lower right hand corner.

But this Chris Brown/Terminator connection is only the beginning. Some investigation revealed more strange connections in the world of romantically connected R&B singers and science fiction movies with robots. Behold, a Venn Diagram: 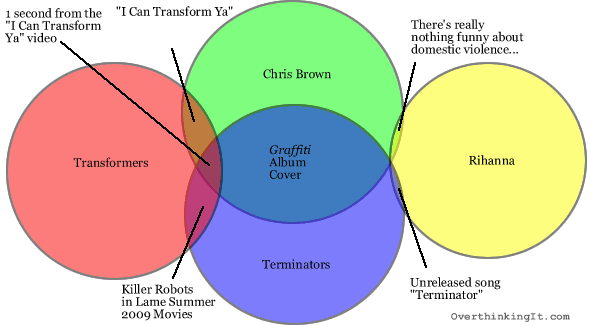 See how it all comes together, after the jump:

The connection should be pretty self explanatory, but in case you needed a reminder: the endoskeleton metal hand… 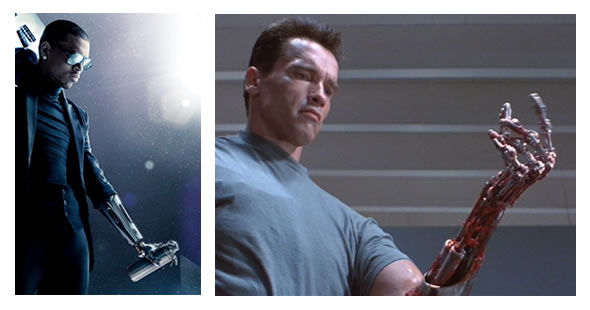 …are unmistakable calling cards of Terminator 2.

I would have written this off as mere coincidence or a simple throwaway reference, but then I discovered this:

“I Can Transform Ya”: Chris Brown + Transformers

Okay, it’s not Terminator, but it’s still in the “killer robots in blockbuster movies” ballpark. Nevertheless, this song is clearly all about Transformers and not Terminators: its lyrics reference “Optimus Prime,” and the special effects in its music video clearly evokes Michael Bay’s recent movies:

(The ninjas also evoke “G.I. Joe,” but let’s ignore those for now. I have no room for ninjas in my Venn Diagram.)

But just when it seems like Chris Brown has totally ignored the thematic elements of his album cover, we get this image for about one second:

1 Second of “I Can Transform Ya:” Chris Brown + Transformers + Terminator 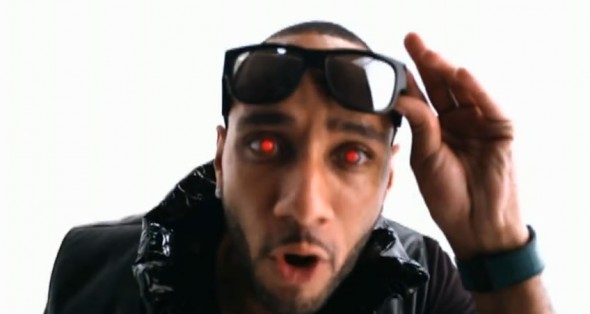 There’s no way this is an accident. In case you needed a reminder of what he’s referencing here: 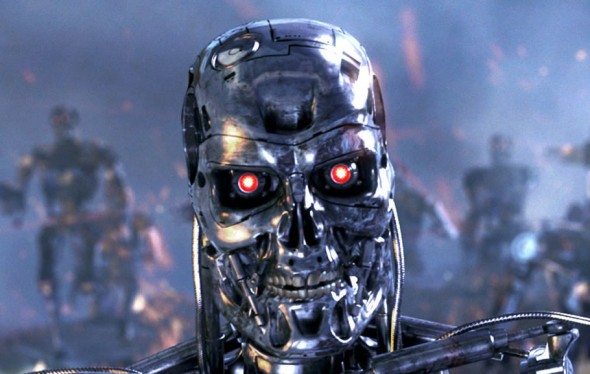 Chris Brown maybe a confused young man, but I’m sure he knows his Terminator and that these references are intentional.

So what’s this all about? The missing link here seems to be…

In May 2009, shortly before the release of Terminator: Salvation, this Rihanna song was leaked onto the internet:

Actually used in the movie? Noooo. This song is nowhere to be found on the soundtrack, and though Google searches reveal plenty of speculative articles on this song’s connection with the movie, there are none that I could find that explain the existence of this still (as of December 2009) unreleased Rihanna song called “Terminator” that’s full of references to the movie.

But there is a chance that this song explains the Terminator references in Chris Brown’s album cover and music video. Perhaps Brown, upon learning that Rihanna had a song related to a robot-related summer sci-fi movie, chose to do his own robot-R&B song as either an odd tribute/obscure diss to his former lover/victim?

Probably not. The most likely explanation is that this is all coincidence. But even if that’s the case, I think you’d agree with me when I say that Chris Brown, Rihanna, Terminator, and Transformers have all come together in exceedingly odd ways with these two songs.

You probably didn’t need a Venn Diagram to figure that out.

Who am I kidding? You love Venn Diagrams! Everyone loves Venn Diagrams! Allow me to illustrate the last intersection of the diagram (that doesn’t involve an actual felony):

I couldn’t find a way to work this into the Venn Diagram without making it insanely complicated, but it turns out that Transformers star Shia LaBeouf and Rihanna were dating back in 2007! What is going on here???