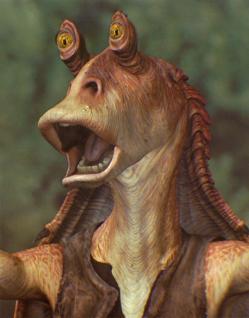 There are a million and one opinions about where the prequel trilogy went wrong. But let me point out that the original Star Wars was written over the course of many years, with the input of many different people. If you want, you can read a whole bunch of drafts online, which are wildly different than the actual movie. Star Wars didn’t spring fully formed from Lucas’s head – it was hammered out piece by piece.

Now think about Episode I. Lucas didn’t need anyone to greenlight it – he was financing it himself. And as any writer can tell you, after you finish that first draft, you invariably believe it’s a work of total genius. If you’re lucky, you wake up the next day and you’re able to see the flaws by yourself. For most people, you need some trusted readers to give you honest opinions. Did Lucas show Episode I to anyone who would be blunt with him? I’d guess his readers were either Lucasfilm employees, or close friends like Steven Spielberg who aren’t necessarily going to be harsh critics.

I think that even on his worst day, James Cameron is a better screenwriter and director than George Lucas. But I also think it’s a dangerous thing when you have the power to decide when your script is ready to shoot. You should have to spend months rewriting every word, even if no one’s forcing you to, because no screenplay is perfect right off the bat. 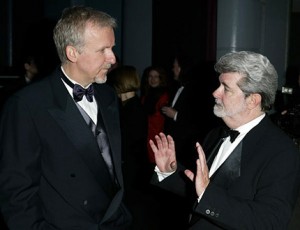 The only picture I could find of them together. Perfectly, it was the 2004 Visual Effects Society Awards.

I don’t know if Cameron is surrounded by yes-men who didn’t make him fix his script. But I do know that from a technical standpoint, there are an uncomfortable number of similarities between Avatar and Episode I. Both directors are obsessed with special effects, and famous for pushing the envelope with each project. Both are control freaks who dream about manipulating every detail of every frame. Both delayed their pet projects for years, waiting for more advanced technology to come along. Hell, even Cameron’s crusade to get 3D projectors into theaters parallels Lucas’s crusade to get digital projectors into theaters.

And the thing that worries me is, for all the hoopla, the special effects of the Star Wars prequels weren’t nearly good enough. Remember that scene from the end of Episode I, where the robots are fighting the Jar-Jars? Two computer-generated armies – a breathtaking technical achievement at the time. It also looks fake as hell. I honestly believe that Lucas, the Industrial Light and Magic CEO, bought his own hype, and believed that his effects were completely believable. He was probably tickled pink with the number of servers crunching teraflops of data they had going. In the end, he overreached – the technology wasn’t up to the challenge after all. The movie suffered the ultimate insult, losing the Visual Effects Oscar to The Matrix.

Cameron is also a tinkerer, completely in love with the toys he’s built for himself. When he shot Avatar, he could look through his camera and actually see the actors as their computer-generated selves, moving through the computer-generated set. It’s amazing technology, without a doubt. But nothing I’ve seen so far has blown me away. It looks great, but it still looks like special effects to me. (And I agree with Pete that the Na’vi designs aren’t too interesting.) Cameron could prove me wrong, but I wonder if as a special effects pioneer, he’s got a blind spot for the limits of the technology. (One of the many symptoms of Lucasitis.) 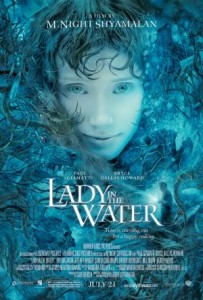 What is Frodo doing in my pool?

CASE STUDY: Lady In the Water

Obviously, M. Night Shyamalan isn’t in the same league as Lucas, Jackson, and Cameron. But he also makes much smaller movies, so he ends up having a similar level of clout. In July 2006, Entertainment Weekly published a behind-the-scenes look at Lady In the Water, and the combination of ego and the power to indulge that ego is staggering.

Shyamalan had the Lady In the Water script hand-delivered to four top Disney execs on a Sunday. He specifically chose a Sunday because he wanted their undivided attention (nevermind ruining their weekends). A couple days later, the four executives went out to dinner with Night, and expressed some reservations about the script. (What the article does not say is that the writer/director wrote a part for himself, as a writer whose work is so amazing that it brings about world peace. In other words, he cast himself as the messiah. That’s your first hint right there that Mr. Shyamalan is a… what’s the word… douche.)

Night went into a long monologue of everything he had written as an adult, as a writer-for-hire, as a ghostwriter, as the writer of four original screenplays for Disney. He cited dollar figures, how the movies had ranked for their studios… Night had always thought they let him do his thing, as a writer and a director, because he had earned the right to do so. Now he was hearing something different. He was hearing: We didn’t put our foot down last time, and we regret it; we’re not going to make that mistake again.

“Last time” refers to The Village, a movie which got a 42% positive rating on Rotten Tomatoes. So yes, maybe these executives had a right to be a little concerned. At least, that’s what I think. He disagrees:

He had known these people for years. He had always liked them; he had always thought they were smart. He knew they were good people.

“Good” people. There’s an implication buried in there that disliking the script is somehow a moral failing. By the way, if you’re wondering how the author knows what Night is thinking, this is an excerpt from a book written by a guy who Night invited to follow him during Lady In the Water. Night must have told the guy about the dinner, probably believing it made him look like a sympathetic victim.

But here’s my favorite part of the story; the part that will make me hate M. Night Shyamalan forever.

Cook told Night he could still make the movie at Disney, even if the executives didn’t understand it. He said, ”Prove us wrong, Night. Just make the movie for us. We’ll give you $60 million and say, ‘Do what you want with it.’ We won’t touch it. We’ll see you at the premiere.”

”I can’t do that,” Night answered. Spend a year of his life trying to prove them wrong? No. What a waste of energy. Their lack of faith in Lady in the Water would infect the whole project.

”I want to thank you for six great years and four great movies,” Night said.

I honestly have trouble wrapping my brain around this. They offer him $60 million to make his movie, exactly the way he wants to make it. It’s every filmmaker’s dream. And M. Night Shyamalan turns the offer down, because he doesn’t want to work with someone who would even suggest (not insist, just suggest) that the script could use a little work. 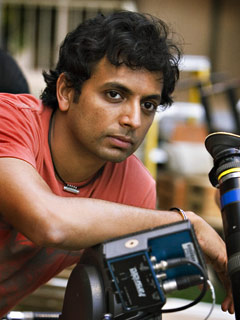 You know how much I hate this guy? I cannot wait until he releases another movie, so I can watch it fail and imagine how devastated he is.

I am angry on behalf of the Terry Gilliams of this world. And I cannot tell you how much it pleases me that Lady In the Water was completely ripped apart by the critics and lost tens of millions of dollars for Warner Brothers.

Now the question is, do you believe that James Cameron is as full of himself as M. Night Shyamalan? If a Fox studio executive ever tried to give him some constructive feedback on Avatar, can you see him rattling off the domestic gross of Titanic and banning the guy from his set? I can. Cameron’s a great filmmaker. He’s also a raving egomaniac. And when raving egomaniacs become King of the World, they have a way of buying their own hype.

Hollywood executives have a bad reputation. It’s absolutely true that a lot of them are only interested in making a high-grossing product, and couldn’t care less about making a good movie. But while Hollywood executives are behind a lot of the movies that disappointed you the most, they are also behind most of your favorite movies. Ideally, their job is to make the movie better.

I know this seems controversial, but it’s true.

We geeks spend a lot of time railing against studio executives, wishing they would just give talented directors the freedom to make the movies they want. For the most part, we’re right. But there’s a point at which too much freedom becomes dangerous. Anyone who has been forced to rewrite something knows how agonizing a process it can be. If you’re Lucas, Jackson, Shamalan, or Cameron, and you don’t have to rewrite if you don’t want to… are you going to? Maybe you stop at five drafts instead of ten. After all, reporters are lined up to interview you for puff pieces about what a creative dynamo you are, and studios are in a bidding war to make absolutely anything you give them.

In Shyamalan’s case, he not only refused to listen to constructive criticism, he actually ostracized anyone who doubted his brilliance. What I want to know is, did Cameron have people in his inner circle who told him if the ending is corny, the jokes weren’t funny, or the whole thing needed to be ten minutes shorter? Bottom line: every emperor, no matter how powerful, needs someone to tell him if he has no clothes (or if Jar-Jar needs to be taken out back and shot). We’ll find out if Cameron had that soon enough.