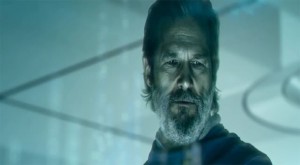 TRON is, on the surface, a fairly simple Hero’s Journey story, common in the effects-heavy ‘80s. Man is somehow zapped into computer, man meets a girl and a hero, man fights the Man and triumphs. But beneath that is a relentless religious text, one perhaps uniquely aligned to the zeitgeist of the 1980s, that we’ll elucidate here.

Take first the “programs”, the common folk of the 8-bit world. In TRON, programs are actual people inside the computer, enslaved by the Master Control Program and forced to compete in gladiatorial games. Their religious opium is a belief in the Users, to them, a mythical, unseen force which created them, oversees them, and only wants the best for them, but seem powerless to interfere in stopping their oppression. The MCP actively suppresses this religion, even though he knows it’s actually true; he himself is beginning a campaign to take over and manipulate the human world, regularly interacting with a human, played by David Warner, in the process. The programs are, except in a few cases, made in the very image of their programmers, and far be it from us to belabor the obvious religious parallels there.

Next we come to the title character, TRON. As the line that introduces him so aptly puts it: “His name is TRON. He fights for the Users.” Is there no more apt description of the religious crusader? TRON is a warrior, fighting for unseen gods. 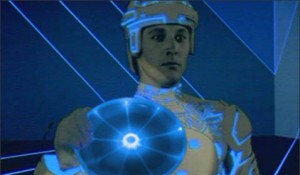 Is there none in the land of TCP/IP who is just?

Finally, we come to the key player in this religious parable: Flynn, who serves as our Christ figure. In fact, the parallels between Flynn and Christ are numerous. Flynn descends from the real world into the data realm and is appalled by the rampant corruption and oppression that surrounds him. Flynn allies with TRON and chases the MCP to his lair, where, in a noble act of self-sacrifice, Flynn leaps into the MCP’s control beam to destroy it, thus erasing his digital body and returning Flynn to the higher physical world.

The parallels run deeper. The MCP, when stripped of his vast animated mask, resembles no one so much as an aged rabbi, perhaps a nod to Caiaphais. The film itself is shot in black and white for the “computer” sequences, and uses silent-film style makeup for technical reasons, thus echoing the epics of the Christ that were so popular in the 1920s, films such as Cecile B. DeMille’s King of Kings. Finally, there are the gladiatorial games themselves, which reflect both the success of Atari in the ‘80s, and the fate of many a Christian believer in ancient Rome.

TRON was released in 1982, when the Reagan era and the franchises and stars that accompanied it were first rising to their ascendency. With the success of Star Wars, science fiction was seen as a serious moneymaker and cultural force for the first time. Similarly, “man-on-a-mission” films such as First Blood and Death Wish were popular and becoming moreso. Finally, televangelism and religious involvement in politics were rising to a frenzied height unlike any seen in the 20th century.

Is it so difficult, then, to see TRON as an epic of the Christ for the 1980s? Where Jesus practices not passive resistance, but taking the fight directly to the foe with the help of a righteous warrior, and sacrificing himself to protect both the lowly creatures made in his image and the heavens above? In the end, isn’t Flynn no less than a digital Jesus? 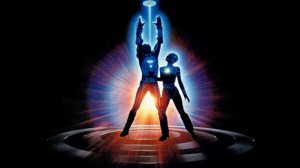 No one can come to the Download except through me.

[Have you accepted Bruce Boxleitner as your lord and savior? Testify in the comments!]

9 Comments on “Your Own Digital Jesus: The Religious Subtext of TRON”