Listen, yo ass is about to be missin
You know who gon find you? (who? ) some old man fishin
Grandma wishin your souls at rest
But its hard to digest with the size of the hole in your chest

Let’s look at that video again:

The racial dichotomies are pretty obvious, but I’ll enumerate them anyway —

The cops really intent on killing DMX – most notably the helicopter sharpshooter, the ones who storm the bank, and the one who gives the order to shoot him – are all white.

Most figures of authority in the video who are not trying to kill DMX are black – the police captain managing the hostage situation, the bank teller DMX initially tries to talk to, the news reporter, the man with the Suburbans.

There is also a sharp contract in contexts – the bank, the ATM, and its patrons have a whiteness to them as marked by the use of color and form – whiteness being associated with confounding social order and pale hues – whilst DMX, the criminal, even the police reporter and the police captain – are all more relaxed, more comfortably dressed, more colorful. There is a lot of contrast between cops that are threatening and cops that are not threatening – the threatening ones look more uniformly white, as well as more a part of overwrought civilization – the excessive imposition of artificial order – than the non-threatening ones.

Even simply put, a lot happens in the video’s 4 minutes and change. DMX goes to the bank to use the ATM. The ATM doesn’t work, so he goes in to complain to a teller, not knowing that the bank has been robbed and that he, an angry black man (for what is DMX if not angry?) will be mistaken for the bank robber. DMX is suddenly in the midst of a hostage situation.

Despite his efforts to rescue a wounded security guard and get all the hostages to safety, the police are intent on killing him. He makes a daring escape by leaping off the building while tied to some sort of conveniently located rapel line, just as a whole convoy of booty-dancing girls arrive to distract the cops. DMX gets away, and the video is framed as if he is complaining after the fact about how upset he is. 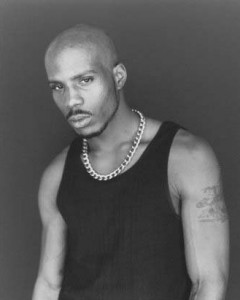 DMX is a very sharp, smart, talented guy. He's the only artist ever to debut five consecutive albums at #1. It's a shame that he has this unfortunate look on his face in so many pictures.

Now, not so simply put

Through the video, DMX lip synchs the lyrics of the songs to various parties. The lyrics are a very DMXish screed that falls into what I will from now on refer to as “The DMX Paradox”

The DMX Paradox – The belief that someone being too quick to violence is being foolish, frivolous, and unwise, but that someone retaliating against such people with violence acts from intelligence, seriousness and wisdom.

That is, when you try to shoot me, you are being a punk who needs to stop wasting my time, grow up and stop trying to act tough, but when I shoot you, it is because you are a punk who ran his mouth too much, and I am mature and justified in shooting you.

The song is half-threat, have frustration, as DMX is trapped in a cycle of violence and disrespect and is forced to become what he despises; somebody who commits acts of extreme violence when he should have better things to do with his time.

And as much as parts of the video direct the song at the bankers, the hostages, the cops, the police chief, and other characters, the primary target is other rappers.

DMX is bemoaning the fact that he is being provoked to act in a certain way because other rappers act that certain way – that he is bound by expectation to fall to their level.

The video takes this phenomenon and places it in a Kafkaesque world of modern institutions twisting human intent, and it names the ultimate cause of this misplaced role assignment – this expectation that people will fall below their level.

The civic construction of race and the attendant unequal levels of service and legal protection afforded by them is the modern pressure that drives DMX to madness – where, at times during the video, he glories in the role of the hostage taker, taunting the cops, daring them to come after him, never seeking to rectify the mistaken perception – in the video, DMX makes very little attempt to inform the police that he is not the guy who robbed the bank.

Why? Because he thinks/knows he lives in a world gone mad, and that the construction of race is bound up in and propelled by this madness. Although he’d probably have a pithier way of saying it that you could dance to.

Episode 742: Girlboss! I Wanna be a Girlboss!

8 Comments on “Great Moments in Racial Discourse #3: “Party Up (Up in Here)” by DMX”