[In this new series, Overthinking It writer John Perich dissects the “high-concept train wrecks” of the early 80s. These big vision monstrosities, known for their weird music and kitschy style, left their stamp on the first half of the decade. John takes a look at these cult classics, from birth to termination, and their impact on pop culture] 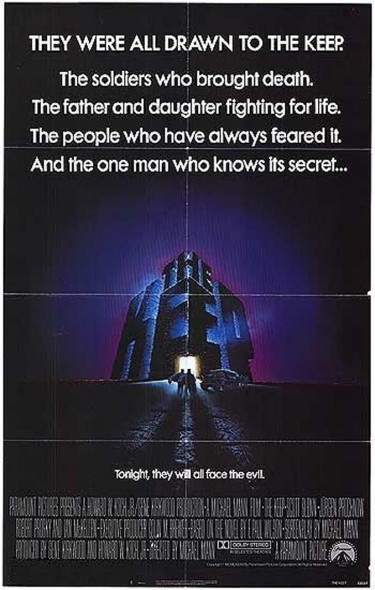 What Is It
The Keep (1983), Michael Mann’s last big project before “Miami Vice.” A fantasy/horror film.

The Big Idea
Nazis dispatched to guard a crucial Romanian pass occupy an ancient keep in the Carpathians. They unwittingly release an ancient demon trapped within, who picks them off one at a time. Adapted from the well regarded F. Paul Wilson novel of the same name.

Where It Goes Off The Rails

… And Then, Tragedy
Glenn plays an immortal something, who wakes up at the same time the demon does, and travels from somewhere to this remote mountain pass (which the Nazis are supposed to be guarding – bang-up job, fellas). He meets the daughter of the Jewish doctor whom the Nazis are using, since they’re staying at the same inn.

Not four minutes movie time; there’s a poorly dubbed scene of them sitting on a grassy hilltop, staring deeply into each other’s eyes and mumbling something. Not even James Bond works that fast. But start your watch the first time Scott Glenn and Alberta Watson appear on screen together, and stop it when they’re naked, and tell me I’m wrong.

This is a real shame, because Watson’s character serves no other purpose in this film except to get raped by Nazis and to get not-raped by Glenn. Not only that, but the stilted love scene retards the pacing in an already lethargic film. Michael Mann apparently had plenty of time to show these two writhing on a bedroom floor unconvincingly, but couldn’t spare thirty seconds to mention (1) Glenn’s character’s name or (2) the demon’s name until the very end of the film.

And that’s really what does this movie in, aside from the overacting: the poor pacing. The Keep is a miracle of bad pacing: it’s amazing that a 96-minute movie could feel so sluggish. Shots of backlit Nazis running in slow motion, or Ian McKellen scrambling up a cliff with a Powerful Demonic Talisman took precedence over characters saying things or resolving conflicts.

Where Can I See It?
Not on DVD – this little gem’s only available on VHS. You can watch the entire thing on YouTube, but be warned: the video quality’s as terrible as you’d expect a Flash upload of a 25-year-old VHS movie to be. Given the strobe lights and generous use of dry ice, there will be several scenes where you’ll have no idea what the merry hell is going on.

10 Comments on “Cargo Cult: The Keep”