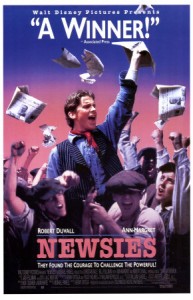 Check out the names above the title. Christian who?

I feel like the words “cult classic” sometimes get used to defend pretty much any film that was a complete commercial failure. Saying a movie is a cult classic can be the equivalent of saying a girl has a nice personality. But to me, Newsies is a real, actual cult classic. I know this because if you casually name-drop the movie in public, four out of five people will stare at you blankly, and the fifth will jump up and down and say “OH MY GOD I LOVE NEWSIES!!”

For the four out of five of you, the movie is based on the real-life Newsboys Strike of 1899. Christian Bale plays Jack “Cowboy” Kelly, a vaguely Dickensian street urchin with an accent as majestic as the Brooklyn Bridge. Back in those days, the newsboys had to buy the papers themselves (and eat the cost for any they couldn’t unload). So when Joseph Pulitzer decides to start charging them an extra 1/10th cent for each pape (the cool kids call them papes) it’s a big deal. (I believe 1/10th cent is about $84 in today’s money.)

But before this goes down, Jack gets to sing a song about his fondest dream: leaving New York behind to move out west. It’s called “Santa Fe.” Please take a moment to enjoy Batman singing and dancing.

When Newsies came out in 1992, a young man named Jonathan Larson was writing a musical called Rent. It’s also set in New York, ninety years later. (In Rent-talk, that’s 47,304,000 minutes.) The show is about young artists struggling to survive on the Lower East Side, and it takes most of its plot from La Boheme. For instance, in Puccini’s opera, one of the characters is a philosopher named Colline. In Larson’s updated version, he’s a philosophy professor named Collins.

Midway through the first act, Collins gets to sing a song about his fondest dream: leaving New York behind to move out west. It’s also called “Santa Fe.”

These songs not only have the same name, they’re about exactly the same thing: an unrealistic fantasy that somewhere out west lies this perfect paradise, if only the singers could escape Manhattan. But in the end, both men give up these plans (at least for now) because, well, they heart NY, warts and all. 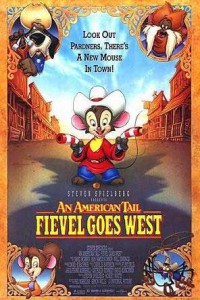 Yet another New Yorker who dreams of Santa Fe.

The similarities are pretty striking, and it’s tempting to hypothesize that Jonathan Larson might have seen Newsies (after all, he DID like musicals) and put his “Santa Fe” in Rent as a sly little homage. But Wikipedia claims that Larson wrote the song sometime between 1989 and 1991, before the film was released (see the first paragraph of this section).

But if it’s a coincidence, it seems like an unlikely one. In 1990, Santa Fe’s population was a measly 55,859. But size isn’t everything, and as it turns out, Santa Fe is a perfectly logical place for these particular characters to fixate on.

In Newsies, Jack’s longing for the west seems to come from a dime novel he carries around with him. The script describes the cover as…

…a blue-perfect sky over a perfect yellow desert; a large red sun shines down on a perfect adobe.

And this is exactly the image that the Atchison, Topeka and Santa Fe Railroad Company wanted turn-of-the-century New Yorkers to have. In All Aboard for Santa Fe: Railway Promotion of the Southwest, 1890s to 1930s, Victoria Dye writes about how the company was actively promoting that particular city, as a way to increase business.

To challenge the Southern Pacific’s monopoly, the AT&SF became the first industry to exploit the history and scenic attractions of New Mexico, and the town of Santa Fe represented the essence of the Southwest… Starting in the 1880s, the AT&SF began its promotional campaign to sell Santa Fe as a travel destination.

Dye, All Aboard For Santa Fe, page 16

These promotional efforts actually did incorporate dime novels like the one Jack has. So even through Santa Fe was a tiny town, it’s historically accurate that he’d view it as the epitome of the southwest. (Newsies fans: Savor the irony that Jack, a consummate salesman and spinner of tall tales, is completely taken in by the railroad’s stealth marketing.)

There’s also a good reason why Collins would pick Santa Fe. Collins is gay. And Santa Fe is really gay. In fact, the city trails only San Francisco in percentage of households headed by same-sex partners. So when Collins sings about how his drag-queen boyfriend can hang out in his restaurant, well, that would not only be socially acceptable there, it would probably make it a popular destination.