The stories of Hinduism are fascinating, and reveal much about the nature of humanity. Unfortunately, many of us in the West were not educated in Hindu tradition, and so we feel alienated from a significant part of the collective unconscious. What should we do to get better acquainted with the nearly one billion Hindus?

We should watch Transformers.

Unlike Western Abrahamic religions, Hinduism is not a single, unified narrative. Instead, the holy texts of Hindu tradition offer a cloud of overlapping, contradictory or unrelated puranas (stories) populated by hundreds of characters of varying degrees of divinity. While certain characters might be incredibly important to one local tradition or another, three of the most important deities in Hinduism (Brahma, Vishnu and Shiva) appear in the texts of almost all regions. In the numerous creation stories of Hinduism, these three gods compose the trimurti, a trinity responsible for the creation, preservation and eventual destruction of the universe.

Michael Bay’s Transformers is also not a unified narrative. It is a cloud of overlapping explosions, contradictory dialogue and unrelated plots populated by robots and character actors of varying degrees of obnoxiousness. While certain giant talking robots might be incredibly lucrative at one point or another, the three most important players in the Transformers’ story are Optimus Prime, Megatron and the All Spark. These three intellectual properties act out the creation myth for the Transformers universe. They also serve as a handy analog for understanding the central narratives of Hinduism.

We cast the All Spark as Brahma, the creator, though this is not an easy fit. All of the Hindu gods are complicated and paradoxical, and tend to work better as aspects of a specific story than as universal constants. Thankfully, Michael Bay’s Transformers are not as nuanced as their cartoon counterparts; character development accounts for very little of the film’s runtime, and almost none of the little there is goes toward fleshing out the fleshless title characters. We can therefore assign whatever value we like to the few details that we do know about the All Spark and everything else that fell to earth from the ruins of Cybertron.

Many of the Hindu creation stories imagine the pre-human era as an endless sea, barren of life, on which floats the golden egg of life, waiting to be cracked. We can easily pull together this lifeless sea and the endless, empty space between Cybertron and Earth. Just as Optimus Prime, defiant among the burning rivers of Cybertron, flung the All Spark into space to give life a new start on Earth, Hiranyagarbha was cast into the darkness, from which Brahma would emerge, restarting the infinite cycle of creation. In certain traditions, the spark of life (containing Brahma) is cast adrift after it comes from the chest of Vishnu, the preserver, whose essence is present in all leaders and kings who wish to do good in the world.

Vishnu must then be Optimus Prime. According to Anna Dallapiccola’s 2003 book  Hindu Myths, Vishnu is the “heavenly king who…descends to Earth…to redress the balance between good and evil.” Throughout Transformers, Optimus reminds the other Autobots of their responsibility, not to the humans themselves, but to a greater sense of justice. The humans are not good or bad of themselves, for they are a “young species.” Humans can learn to approach the godly state of the Transformers, who live for eons on the level of the cosmos (just as the Hindu deities live in divine years, each of which contains 360 human years), but only if they can stop destroying each other. 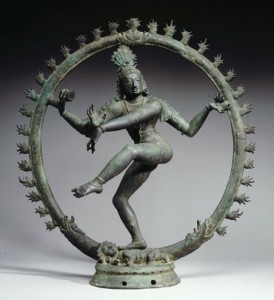 This leaves us with Shiva, and with Megatron. Shiva is known by a number of names, prominent among them is “Shiva the Transformer”. Like all Hindu deities, Shiva assumes many shapes and visages (another close tie to the robot toys). He is the “transformer,” however, because of his role in the cycle of creation and destruction. Vishnu works to preserve life and stifle the endless creation and eradication of the universe. Shiva is the opposite force, dancing the universe into existence and then dancing it into the abyss. Shiva, the master of yoga, meditates for thousands of years, waiting for the right time to play his part in the cosmic ballet.

Megatron, sitting frozen for centuries under the North Pole, fits well into the role of Shiva. It is Megatron who instigates the terrible dance of death that takes up a large portion of the second half of Transformers. As silly as it is to watch Optimus and Megatron engage in what looks like Greco-Roman wrestling, the role of dancing in the end of the universe cannot be understated. If we accept that the battle is a dance rather than a struggle, the arbitrary actions of the giant fighting robots begin to make (a little) sense.

Where does this leave poor Shia Labeouf? Implausibly, miraculously, Shia’s character is the human mystic, fated to bring the stories of the gods to the people, initially suffering but ultimately vindicated, and rewarded with the love of a beautiful and virtuous woman…Megan Fox.

Please don’t let me be misunderstood. I am not defending Transformers. It’s a dreadful film, and if you haven’t seen it, you’ve chosen wisely. My goal here was not to justify the lazy and blunt filmmaking of Michael Bay, but to (hopefully) point at one way in which the stories of Hinduism might seem less alien to Westerners. Through the lens of a nearly artless blockbuster, I think we can see a little more clearly the beautiful saga contained in Hindu traditions.

3 Comments on “Can Optimus Prime Transform into Vishnu? Hindu Narratives in Transformers”