This article will cover Lost season 1, episodes 0-15, focusing on episodes 8-15.  Please limit your comments to those episodes.  Thanks. 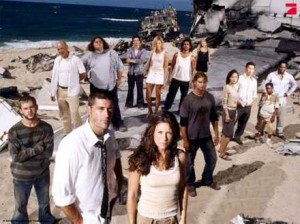 I do remember thinking a little about Lord of the Flies but more particularly that they seemed to be doing a heavy-handed “Redemption” theme. The island gave every character, in some way, what they wanted.  (Tom P.)

Ask the Lost writers and ye shall receive.  Thus:

Everyone gets a new life on this island.  (John Locke)

I just want to go back to the beginning.  (Sun)

I just wish I could start over.  (Jin)

Everyone gets a new life on this island.  I’d like to start now.  (Shannon)

Curse you, Tom P!    Fine, I give.  Maybe… you were right.  The characters on Lost seem to be begging for redemption.  While they may not be true Lockean blank slates (a.k.a. tabula rasa), they sure want to get clean slates.  Yes, “Adam and Eve” are dead on this island, but maybe, just maybe, the once-sinful Lost characters can redeem themselves and reclaim this place as a new paradise.  A Total Redemption Island, if you will, where everybody gets a happy ending and learns a good lesson along the way.  And I’m sure that’s what’s going to happen in the show.  I’m right, aren’t I?   …Guys?

…On second thought, I think I’m going a little overboard.  Let me be fair to my past self.  Lost can’t be renamed Total Redemption Island yet for the simple reason that not everyone has been redeemed.  Let’s look at what happened over the course of the last eight episodes:

Episode 8 (“Raised by Another”): In the past, Claire’s baby-daddy wussed out and left, and a fortuneteller tricked her into getting onto the ill-fated Oceanic Air flight that would start our series.  In the present, everyone thinks Claire is crazy paranoid, but then she and Charlie get kidnapped by Ethan.

Episode 9 (“All the Best Cowboys Have Daddy Issues”): In the past, Jack got his surgeon dad fired for working while under the influence.  In the present, Jack and Kate track down Charlie, and Boone and Locke find a hatch.

Episode 10 (“Whatever the Case May Be”): In the past, Kate conned a bank thief into stealing a safe deposit box for her.  In the present, Kate finds a case (Like in the title!  Get it?!) that has guns and a toy airplane inside.

Episode 11 (“Hearts and Minds”): In the past, ZOMG BOONE AND SHANNON HAD SEX WITH EACH OTHER.  In the present, Boone learns not to want to have sex with his sister anymore.  Step-sister.  Whatever.

Episode 12 (“Special”): In the past, Michael never gets to see Walt because Walt’s mom is a selfish good for nothing.  Then she dies.  In the present, Michael builds a raft and saves Walt from a polar bear.

Episode 13 (“Homecoming”): In the past, drug addict Charlie tried to get clean but ending up stealing shit from his rich girlfriend.  In the present, Claire comes back, and Charlie kills Ethan.

Episode 14 (“Outlaws”): In the past, Sawyer was tricked into killing a guy who, it turns out, wasn’t the man who screwed over his dead parents.  In the present, a boar has it out for Sawyer.

Episode 15 (“In Translation”): In the past, Jin was actually kind of a good guy caught in a bad situation.  In the present, Jin fights with Michael, finds out Sun speaks English, and ruins his marriage again.  Also, Walt burned down his dad’s raft.

Or, in chart form: 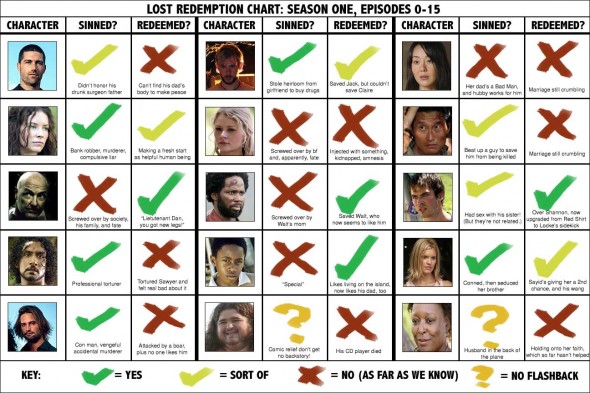 As you can see from the chart, not everyone has been redeemed yet.  For some, like Walt and Locke, the island has been a godsend.  For others, like Kate and Shannon, it is a chance at a new beginning, but simply a chance.  And, for others, especially Sawyer, the island is some kind of karmic hell.  A Total Karma Island, if you will.

How can we make sense of Lost’s island as a metaphor if it seems to have different meanings for different people?  I’m not sure I can just yet.  However, the show’s metaphysical universe seems to make a lot more sense to me when I, like Tom P., conceive of it in terms of redemption.  Specifically, Christian redemption.  More specifically, the idea of redemption through fire.

I’m sure I’m not the only one who has thought of this idea.  Think about it: according to Jack’s dad, Australia is called “down under” because it’s literally Hell.  In fact, folks in medieval times often conceived of Hell as a literal place in the southern hemisphere.  And why not?  What did they know?  They’d never even heard of Australia back then.  Hop a few centuries into the future, and you’ll find that Australia, like Hell, has been settled by criminals.  It’s also hot, arid, and full of poisonous snakes.  All the characters who go there have an awful, awful time.  Don’t get me wrong.  I’m sure Australia is a lovely, lovely country.  But in Lost, it’s (metaphorical) Hell.  Sorry, Aussies.

Heaven, on the other hand, is a place everyone wants to get to.  You go up in the sky and finally reach the destination you’ve always been hoping to reach.  And there it is…

Yes, friends.  In the universe of Lost, Los Angeles (where all the writers live) is Heaven on Earth.  Los Angeles is the place everyone wants to get to.  The characters all imagine that when they arrive, they’ll immediately know peace.  Plus the place is named after angels, which doesn’t really help my argument but doesn’t really hurt it, either.

Take Jack, for instance.  He flew to Australia (Hell), where he learned some terrible news (his dad was dead, probably because of him), and he immediately wanted to get out of there.  Recall how he begged, practically on hands and knees, the Oceanic teller to let him and his father’s coffin on the flight.  In Jack’s mind, he could only escape his psychological Hell if he left Sydney and reached LA, his version of paradise.  The same is true for Boone, Shannon, Claire, Michael, Sun, and Jin at least. Unfortunately for them, they only made it halfway between Hell and Heaven.  That’s why everyone’s caught in some psychological limbo when they’re on the island.  Psychological limbo… or psychological purgatory.

I know, I know.  My argument might sound intriguing, but you’re not sold.  Fear not, for I have read up on purgatory.  Through the powers of Wikipedia, I have reminded myself that, according to Dante, the literary authority on all things purgatory-related, purgatory was imagined in the Middle Ages as a literal place on Earth.  According to Dante, that literal place was located exactly opposite from Jerusalem on the globe.

So, I hopped on over to my friendly neighborhood antipodes map to find out what was exactly opposite from Jerusalem on a globe.  And, lo and behold, Jerusalem’s antipode is in the middle of the Pacific Ocean, in the southern hemisphere, about 1000 miles south of where you’d imagine a flight from Sydney to L.A. would travel.

Want more evidence?  According to Dante, when Satan fell from Heaven, he fell so fast he created a crater on Earth in Israel.  It’s called the Dead Sea.  His impact was so intense, in fact, that he forced land to rise up on the other side of the Earth.  In other words, at Jerusalem’s antipode, Satan created a mountain.  And a mountain in the middle of the ocean, you might recall, is called an island. 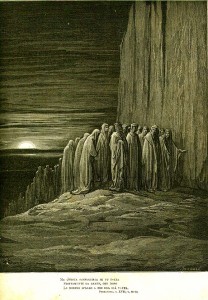 How does this knowledge help us understand Lost?  Well, if the island is purgatory, it means everyone on the island

b)    is going to go through some rather hellish “cleansing,” and

c)    is ultimately going to be redeemed and get to Heaven.  I mean, Los Angeles.  Or they’ll have a redemptive death and go to Real Heaven.  You know.  In the clouds.

If all of this is true, by the end of the series that fancy chart I made is going to be full of green check marks.  Except for Locke, who I still maintain is going to turn out to be some version of a Jesus-figure or God-figure, and maybe except for Claire, who is turning into some Virgin Mary/Eve-figure and is possibly pregnant with the Antichrist.  Unless Walt is the Antichrist.  I’ll have to get back to you on that.

In summary, last week I argued that Lost was a story of reason vs. faith, with reason taking the first round.  Now, faith’s clearly making a comeback in a big way.  It’s not necessarily Rose’s more Protestant faith (pray and Jesus will give you peace) but a darker, more old-school Catholic faith: if you undergo this purgation, you may eventually be allowed in Heaven.  But man, first it will it suuuck.

Next time on Overthinking Lost: What does all this have to do with Australian spiritualism?  Why are only five of the seventeen major characters on the island female?  How can Naveen Andrews stand being so damn pretty all the time?  Or whatever else I think of over the next week…

Comment away!  But, remember, no spoilers past season 1 episode 15!  Otherwise you’ll have to go live on Total Karma Island, where forty-seven other people will spoil shows you like.  Dun dun dunnn!