[Ghostbusters Week continues with a guest post by Chris Richards.]

Possibly the most important line in Ghostbusters arrives around the one hour and three minute mark, but it rarely receives the notice or affection of other lines in the film.  Riding together, Ray (Dan Ackroyd) and Winston (Ernie Hudson) talk about several topics, leading Winston to ask, “Do you believe in God?”

Rather than playing the line for laughs, the two proceed to have a semi-serious discussion on the Biblical End-of-Days, as well as their own personal beliefs.  In a movie so unapologetically anti-authoritarian, the moment is very much out-of-place; perhaps there simply to reassure the viewers’ minds that, yes, the writers have taken the religious effects of Ghostbusters into account.

What does Ghostbusters really say about the religious idea of ghosts?

But before I continue, there is one thing I would like to put forward.  For the sake of this article, I am going to assume a Judeo-Christian mindset of the afterlife (with one notable exception near the end).  To examine the ramifications of Ghostbusters on other versions of the afterlife would simply take too long. (Sorry, Neo-Pharaohists, you’ve been slighted yet again.)

Now, let’s jump right into the heart of the matter.

Certainly, the question must have crossed someone’s mind, as ghosts and the afterlife are so inherently mixed, and belief in the afterlife is often either influenced or informed by one’s religious convictions.  Watching the movie gives us a few clues.  The first ghost we encounter is a librarian, hovering in the NY Public Library’s stacks.  This ghost makes a mess of things; leaving ectoplasm and, at the end of the encounter, transforming into a frightful beast.  Later, we see the Ghostbusters’ secretary asking about the physical forms of ghosts as she makes appointments.  From these encounters, it seems that the ghosts are those of the recently (one would assume) deceased.

This theory is backed up further by Ray and Winston’s theological banter, in which they ponder the theological connection to what is going on.  As the “End-of-Days” come nigh, Winston suggests, their business is going up.  And, through the rest of the movie, this association is left to stand, as the Ghostbusters collectively tie in more biblical imagery into what they are fighting.  Further, if we look into Ghostbusters 2 (which we very seldom should), we can see further evidence of the ghosts being tied to the dead.  Near that film’s climax, two men at the NYC docks call in to report that the Titanic has finally shown up, about 7 decades late.

So it’s settled, the Ghostbusters are capturing dead people, yes?

Well, perhaps not.  Several of the ghosts we see are not all that human looking.  Example Numero Uno is the ‘Ghostbusters’ first successful case, Slimer.  While he has some human-esque features, Slimer is hardly human-looking.  He more closely resembles a pack of Gak than a person.  Also, the Ghostbusters make several references to “entities,” and no one visibly complains about the Ghostbusters ethical or moral responsibilities other than the EPA.  It seems that the Ghostbusters Carbon Footprint is more important than their metaphysical one.

But if these ghosts aren’t people, than what are they?  Perhaps they are demons, minions of Satan/Lucifer, or maybe they are just soulless hunks of ectoplasm.  Maybe there are some ghosts that don’t come from anywhere.

But the weight of the evidence just doesn’t support that argument.  The majority of the movie implies a connection to the deceased, as well as to God.  Through the movies, more often than not, ghosts display human-like form, and human-like behavior.  Even Slimer, for all his gooey glory, is very human in his wants (food and privacy) and his fears (disruptive ambushes, nuclear proton streams).

But, if that is the case, then it throws the whole Ghostbusters business model into jeopardy.  These guys are not killing cockroaches (as their job is humorously compared), it’s imprisoning souls.  Is that right?  Is that just?  Is what they are doing an affront to God?  Abortion may be murder, but the immortal soul would seem to be a more important deal.  Yet, somehow, the religious seem to be OK with the Ghostbusters.  It’s a priest’s opinion that convinces the Mayor to let them fight Gozer in the first movie, and several clergy are praying for them in the cheering crowd of supporters.  Iin 1984, a time when there were less Athiests and alternative religions in the US, the Ghostbusters seemed to be remarkably popular. 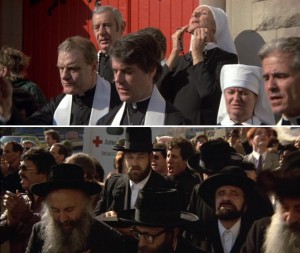 Yet it’s not some random blob of goo they’ve captured (and charged thousands of dollars for), it’s your Aunt Flo or Grandma Ingles.  And what’s happening to Grandma?  After passing on, she might have wandered around for a spell.  After all, she’s always talked about visiting New York, and she could never afford to go while she was alive (the nice old lady was good enough to help you with your student loans instead).  But instead of seeing the sights on her way to Paradise, Grandma got ensnared by some overzealous, glorified exterminators on her way back to the hotel.  They zapped her, trapped her, and locked her in their laser-shielded, nuclear-powered limbo that doesn’t hold muster with the Environmental Protection Agency.  That’s some pretty terrifying stuff to contemplate, and would probably make any God-fearing person hesitate before picking up the phone.  Yet, remarkably, Priests, loyal churchgoers, and people of all creeds seem to love the Ghostbusters (again, except for the EPA). 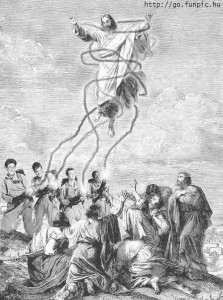 And, finally, we do need to touch on one other theological scenario.  One possible reading of Ghostbusters, one that is perhaps far more disturbing, is that it completely rejects God and contemporary religion as we know it.  After all, the most religious-tinged aspects of the movie is a Sumerian god who turns out to be very very real (and delicious).  Since Gozer exists, does that mean that our God doesn’t?  At the very least, it would mean that Yahweh is only one of a Pantheon of Gods, making the first pair of the Ten Commandments total hogwash.

To many, this is perhaps the most terrifying possibility of all.  Perhaps the Sumerians had it right.  Maybe we’re all on a giant disk in a massive floating tin dome and when we die we enter a dark netherworld, left to roam forever as Gidims (Sumerian ghosts).  While this actually fits the themes of the movie more closely than any religious reading, it’s still not much comfort for the poor souls locked up inside the Ghostbusters’ containment grid.  If that’s the case, I’d recommend you start putting together an alter to Enlil soon; there’s a third Ghostbusters movie supposedly in the works, and who knows if we’ll escape the next apocalypse.

18 Comments on “There is No Religious Undertone, Only Zuul”