[This weekend, we’re pleased to bring you two Star Trek related guest posts, this first by André Callot. As always, let us know what you think!] 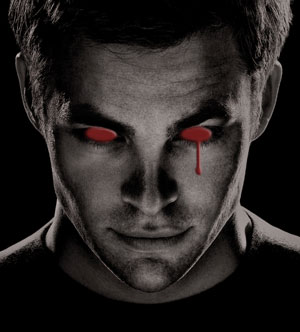 Eyes, why should you see light who have shown me nothing but darkness? The unrelenting black of space, and also the metaphorical darkness of wanting to bone my mom.

JJ Abrams does not want to have sex with his mother.

I am sure that Mrs. Abrams is a lovely woman, and Gerry Abrams (JJ’s dad) is a very lucky man with nothing to worry about.

But somewhere, in a parallel world where Jim Kirk listens to the Beastie Boys and 9/11 never happened, JJ Abrams has murdered his father, married his mother and is right now wandering around Burbank with a white cane and a pair of dark sunglasses.

No, not really. JJ Abrams seems to worry about that, though.

Fringe and the new Star Trek both spring out of daddy issues. Nothing new about that. Hamlet, Robin Hood and Jesus Christ have benefitted from the power of the story of Oedipus: a story that, according to psychoanalytic theory, is so close to the male psyche that we are compelled, as a sex, to re-enact it over and over again forever.

A young boy (Peter Bishop in Fringe, James Kirk in Star Trek) hates his father and seeks to replace him in the affections of his mother. The boy feels guilt over this desire, and when the father is destroyed (George Kirk blows up, Walter Bishop goes nuts), this guilt pushes the boy to all kinds of criminal behavior until a father figure returns (Walter Bishop/Christopher Pike) to convince the boy to take his place in the symbolic order (in both cases, as a figure of authority responsible for enforcing the laws he used to flaunt). This results in the destruction of the father figure and the boy’s assumption of the father’s place. Sometimes.

But what does the son do if the father is both dead and not dead? What does the father do if he murders his son and also doesn’t? Parallel universes disorient Oedipus more than moving his furniture around while he’s at work.

In Star Trek, we’re presented with an alternate-universe version of Kirk who grows up a wild misfit, acting out against a world that took his father away before he was old enough to do anything about it. Kirk is reckless, rude and conspicuously heterosexual. Just like the normal Kirk. Wait. I thought Kirk was like that because he didn’t have a father growing up. What’s the other Kirk’s excuse? Shatner’s Kirk? He had a father and a quiet home life back on the farm, and he still turned into a nymphomaniac cowboy. What gives?

Pine-Kirk’s Oedipal guilt over the death of his father as a child is so profound, so epically important, that it seeps into parallel universes and shapes his parallel selves. The anxiety Pine-Kirk feels about hating his father fills him with so much guilt that Shatner-Kirk has to worry about whether he’s responsible for his father’s death in another universe. It’s Kirk’s multidimensional angst, not the red matter, that shatters the fabric of spacetime and causes the time-twisting black hole. Both Kirks desire the other Kirk’s reality at a subconscious level. Pine-Kirk wants his father to be alive so that he can feel less guilty about his father’s death, while Shatner-Kirk wants his father to be dead so that he can possess his sexy, sexy mother. Through the agent of Spock, the two Kirks are able to draw their mutual fantasy worlds (in which each Kirk’s opposite lives as if it were reality) together, creating the horrifying scenario where Kirk must live in a universe where he has both killed his own father and not killed him.

In the parallel universes of Fringe, Walter Bishop, in the position of Oedipus’ father King Laius, is so terrified of his own son (Peter Bishop) that he murders him with science. Overwrought with guilt, Walter goes into another universe and retrieves a parallel Peter Bishop to raise as his own. The alternate universe Walter Bishop doesn’t carry the guilt of killing Peter, and the guilty Walter Bishop (raising another man’s Oedipus, just like King Polybus in the original myth) gets to pretend that he didn’t kill his own son. Winners all around. Like Oedipus devising a solution for the Sphinx’s riddle, Walter has found an escape route from fate that no one else saw, and he took it.

But this kind of fiddling around with fate cannot go unpunished. The moral of Sophocles’ version of Oedipus is that no matter how clever you are, no matter how far you run, no matter how powerful you become or how hard to try, our stories are told for us by fate, and fate will always win. Walter Bishop thinks that he’s fooled fate and created a clever solution to the Sphinx’s riddle. Now, though, the two universes are smashing together. Rifts are forming between the universe of Walter’s fantasy world, where his son doesn’t exist and yet Walter didn’t kill him, and Walter’s reality, where his son is alive and also has a tombstone.

Slavoj Zizek, the Lacanian psychoanalytic critical theorist, has a name for when the parallel universes of fantasy and reality collide in film: nightmare. The things we desire, we feel comfortable desiring in an unreal fantasy: sexual desire for unobtainable partners, violent urges for revenge, etc. The whole idea of desire can only function in the context of a reality/fantasy divide. When we actually obtain the things we fantasize about, they are never as satisfying as we imagine them to be. If we realized this quality of our desires, we would cease to interact effectively with reality, as desire itself would no longer be desirable. Sexual urges would be tempered by the ridiculousness of the sex act and the disgusting reality of the human body. Violence would be as meaningless as meat slapping against meat without the added significance of the fantasy world.

This, really, is the source of JJ Abrams’ anxiety. He is a complex, modern man who understands psychoanalysis and the significance of the Oedipus myth. He doesn’t worry about his secret desires to kill his father and marry his mother because he knows that’s just part of being a guy. His worries come from a much more neurotic place. He feels compelled to retell the story of how a man’s Oedipal fantasy came crashing into his reality. While he knows that he didn’t kill his father, and he probably won’t kill his father, he knows that he killed his father (and that his father killed him) in a parallel universe, a universe of fantasy. Abrams is terrified of the chance that some day, that fantasy universe will open up in a huge, black, interstellar thunderstorm of the Real and reveal his incestuous desires to the world.

Now, it’s possible that all this is just a silly coincidence, and JJ Abrams just happened to create two parallel-universe narratives with Oedipal interpretations because he writes a lot of science fiction and Oedipus sells (again we look to Star Wars, Harry Potter, Jesus, etc). Abrams created Lost, too, and Lost doesn’t feature alternate timelines where people are killed by their own family, right?

8 Comments on “The Parallel Oedipal Universes of JJ Abrams”