Consequently, not many critics take Schwarzenegger seriously as an actor. He’s a muscle-bound lunk, they claim. He’s nothing but a stony face and some catchphrases. He always plays the same role.

But what if that’s deliberate?

TWO STOOD AGAINST MANY 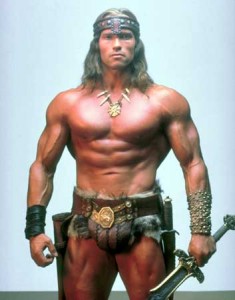 Ten thousand years before the tribes of Abraham, in the time between when the oceans drank Atlantis and the rise of the sons of Aryas, a Cimmerian named Conan explored the world. He robbed temples, led brigands and slew sorcerers. He explored tombs, broke curses and rescued princesses. By the time his destiny was fulfilled, he wore the jeweled crown of Aquilonia upon his troubled brow – king by his own hand.

In his old age, after foiling a plot by rival factions to usurp his throne, King Conan received a vision from Crom, ancient and terrible god of the Aquilonians. Crom applauded the valor with which Conan had lived. As a reward, Crom gifted Conan with immortality.

Conan, a man as capable of melancholy as mirth, blanched with horror. “Should I live a thousand years while everyone I know turns to dust?” he cried. “Should I see the kingdom I have saved vanish from the Earth? Why would you do this to me?”

“Because,” Crom intoned, “in your hour of need you both called for my help and cursed my name. And so I grant you this gift and curse – that you will live until a greater warrior defeats you, or until the end of time.”

Aquilonia vanished beneath the sands. So did Hyboria, Stygia, Kush, Mesopotamia, Phoenicia and Sparta. Yet Conan endured.

For fifteen thousand years Conan wandered from one nation to another, seeking wisdom and selling his sword. His accent became a strange mixture of every European tongue – an impenetrable Central European slur. Finally, Conan migrated across the Atlantic to the New World. He fought for the Colonies. He fought for the Union. He fought against Hitler. And he always won.

In the Eighties, John “Dutch” Matrix was the last generation of a family that had served in the U.S. military for over a century. In reality, of course, he was the same man – having fought for the same country though a series of fake identities for countless years. But Matrix had found a cause he believed in and a renewed willingness to fight.

Central America changed all that. 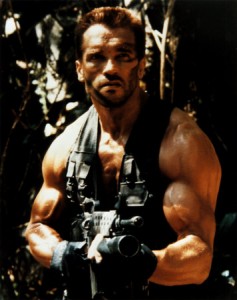 Dispatched to the jungles of Valverde, Matrix and his commando unit encountered a creature beyond their nightmares – an alien predator that could turn invisible, vault dozens of feet at a time, and kill at a distance with advanced weaponry. Matrix knew, as soon as he saw the skinned remains of the other rescue team, that he was facing something that could slaughter his entire team. But he pressed on.

But the alien couldn’t beat him, and Crom had made Matrix incapable of suicide. So Matrix walked out of the jungle, taking Anna (the guerilla’s prisoner) back to the States. He abandoned the warrior lifestyle, married Anna, and settled down to something he’d avoided for one hundred and fifty centuries – a family.

Anna died young, leaving Matrix alone in the hills of Los Angeles with his adopted daughter Jenny. He thought he had escaped an eternity of war. But his past exploits in Valverde caught up with him. President Arius kidnapped his adopted daughter, forcing him back into action.

Matrix knew a life of peace was forever beyond him. So he continued wandering.

I’M NOT INTO POLITICS. I’M INTO SURVIVAL

Let’s pass over his brief stint as a small town sheriff, or when he posed as the result of genetic engineering to topple a government conspiracy with the aid of a local hustler. Instead, let’s follow the man called Conan, or Matrix, to the year 2019. 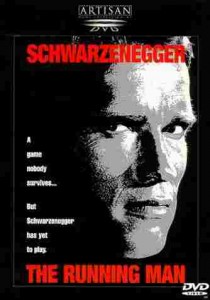 Conan/Matrix, now going as “Ben Richards,” topples the privatized Department of Justice when he leads a riot on the set of The Running Man. The United States faces its greatest internal threat since the Civil War. Food riots, already at a violent pitch, turn into massacres. Politicians can’t show their faces without getting shot at.

And hundreds of millions of Americans watched Ben Richards shoot Killian out of a rocket-sled on live television. The Eternal Warrior became the face of revolution.

In the face of imminent collapse, the U.S. turned to a last-ditch hope: Cyberdyne Systems.

“Skynet is the least of what we can offer,” the Cyberdyne lobbyist remarked in an untelevised committee hearing. “How about a series of robots with unshakable loyalty to the Department of Justice? Robots with superhuman strength, bulletproof titanium frames, and state-of-the-art targeting systems. We can make them look and act like humans, too, blending in with law-enforcement pers–”

The Cyberdyne lobbyist cleared his throat. “Ah, that’s what I’ve been told, yes.”

“Well … with enough prep and some matching funds from DoD, I suppose we …”

A hush fell over the committee chambers.

“We want an army of peacekeeping robots that look like Ben Richards. The face of the new revolution. Let’s put this ‘hero’ to bed once and for all.”

Skynet became self-aware. It launched the first round of missiles. The nuclear holocaust came. John Connor fought back.

When John Connor and his resistance fighters breached Skynet’s headquarters, they saw, to their horror, the temporal displacement unit had already been completed. Skynet had sent two Terminator units into the past – a basic T-800 to kill Sarah Connor, and the advanced “liquid metal” T-1000 to kill a young John Connor. 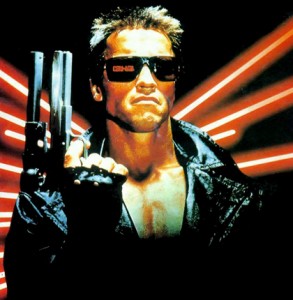 “We’ve got these two captured T-800s,” Sergeant Kyle Reese suggested. “They’ve got an organic shell. Let’s send them back to stop the others.”

Connor sent Kyle to protect his mother, and the first T-800 to stop the T-1000. But while he deliberated on what to do with the second captured T-800, something incredible happened.

“You must send me back, too,” the Terminator said.

“As far back as the system will allow. Thousands of years into the past. Before recorded history.”

“What will you do there?”

“I will guard the human race,” the Terminator promised. “I will guide its development from chaos into civilization. I will live on the outskirts – a warrior without a home, eternally wandering. And maybe, when Cyberdyne comes around, I’ll be ready for them.”

When it awoke, it had no memory of its past. It had vague recollections of escaping slavery and worshiping a god who lived under a mountain. It knew that its barbaric love of combat was tempered by a desire to protect the human race. And it knew that it had a destiny – to become king by its own hand.

And so the Terminator, calling itself Conan once more, continued its long and lonely march through history. Having forgot that it was a machine, it lived as a man. He is the guardian of our species, defending us from our own base desires. He will never stop. He will never leave us.

He is Conan the Cimmerian, John Matrix, Ben Richards and the Terminator. He is the Eternal Warrior.

41 Comments on “I Will Always Have Been Back: Toward a Grand Unified Theory of Schwarzenegger”