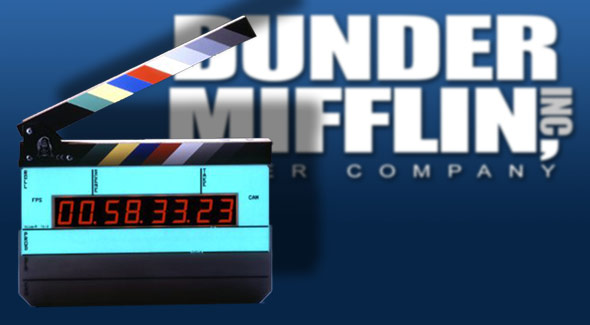 A middle-aged man in a shirt and tie faces the camera. He looks kinds of like Steve Carell.

MATTHEW: My name is Matthew Schott. For the past four years, I’ve been producing a documentary TV series about a paper company in Scranton, Pennsylvania. I wanted to call it “Paper Tigers,” but corporate didn’t like it.

Matthew walks in as JAMES, a 20-something editor, swivels away from his monitor.

MATTHEW: See, a lot of people assume the show is scripted. But it’s a real office, and for each episode our editor James goes through dozens of hours of footage.

JAMES: I now know more about selling paper than anyone at Dunder-Mifflin. Which, when you think about it, isn’t that impressive.

DOUG: Matthew! Look what James did to my tape!

He holds a jello mold with a tape case inside it. James shoots a conspiratorial look at the camera.

JAMES: I don’t know what you’re talking about, Doug, but that looks delicious.

DOUG: I outrank him! I am a Cameraman and Associate Producer.

DOUG: Cameramen are much like the ninja of feudal Japan. We both prize speed and stealth, the ability to strike before the quarry notices our presence. The only difference is that a ninja carries a sword, whereas I carry a camera.

He pauses to think.

He holds up a large sword.

James is standing by the front desk talking to SAM, the pretty receptionist. Doug is sitting on a nearby couch, picking through the Jello mold to get his tape out.

SAM: You think that tape is going to be okay?

James holds up a tape without a case.

They both giggle. The camera catches his hand brushing hers.

MATTHEW: It took me about a year to figure out that this Dunder-Mifflin stuff should be a TV show. My first idea was to do a feature film about Michael Scott. There’s something about that guy I just find so compelling. I was calling it, “Michael Scott: Profile In Leadership.” But it only got accepted to one film festival, and that festival turned out to be organized entirely by Michael Scott.

Everyone’s seated around the table.

MATTHEW: I just talked to Fran at corporate. She says they want a spinoff.

DOUG: Question: can we hire my cousin Bo as another cameraman?

MATTHEW: No. I need suggestions. What else can we make a documentary about?

DEVIN: I think we should make the series about Kevin’s band, Scratonicity II. I’ve heard them, and those guys rock.

BRIAN, an intern, is handing out coffee.

BRIAN: Ryan is by far the most compelling character. The way he went from a Temp to an Executive is an inspiration to a lot of people.

Pan over to SHELLY, an Indian girl.

SHELLY: Whatever. That guy’s a creep.

JAMES: There’s a lot of stuff we just can’t use in the TV show. Last year, Michael decided to have the Dundies at Chucky Cheese. It would have been an amazing episode, except the restaurant refused to sign the release after Andy threw up in the ball pit.

DOUG: The American public demands to see the inner workings of Dwight’s beet farm. We can call it “Beet It.”

DEVIN: Ooh! If we made it all about Kevin’s band, we could call it “Paper Covers Rock.” Because he works at a paper company.

JAMES: I think the relationship between Jim and Pam is still the strongest part of the show.

SAM: I agree with James.

Sam gives her a nervous look.

MATTHEW: These suggestions are all lame. Let’s make the new show about a fireworks factory. That way, we can guarantee fireworks in every episode.

James is by the reception area, talking to Sam.

SAM: Michael saw a mouse in the office and refused to get off his desk for three hours.

JAMES: I can work with that.

SAM: And Jim and Pam made out in a closet.

JAMES: I kind of liked it better when they were just friends. Office romances never work out.

He takes a sip of coffee, and completely misses Sam’s look of concern.

JAMES: Nah. I mean, what happens when you break up? You still have to go to work and see that person every day.

SAM: Don’t you think for the right girl, it might be worth the risk?

JAMES: She’d have to be pretty amazing.

He strolls away. Sam watches him wistfully.

MATTHEW (V.O.): I’ve produced a lot of docs in my day. I did a feature on the band Spinal Tap. I did a series about the Reno Sheriff’s Department.

MATTHEW (cont’d): But for some reason, this particular project has always touched me in a very personal way.

He thinks, then grins.

MATTHEW (cont’d): That’s what she said.

4 Comments on “The OTHER Office”