So imagine you’re sitting next to someone on the train who’s playing a game on his iPhone. You can’t help but glance out of the corner of your eye, and you’re a bit shocked to see swastikas, copious amounts of blood, dead bodies, dog killing, and…Mecha Adolf Hitler?? 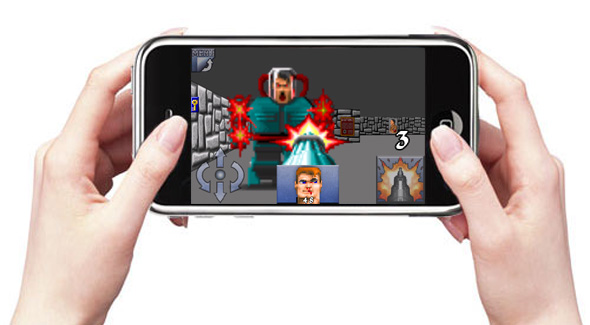 Whoa..is this OK to play in public?

Granted, this isn’t the first time a violent video game with possibly objectionable content has been made available for a portable video game system–game makers have been delivering this content ever since portable systems got sophisticated enough to render red pixelated blood. But there’s something special about this unholy combination of Wolfenstein 3D and the iPhone.

Did I mention you kill dogs in this game?

First, let’s go back to 1992. Wolfenstein 3D is widely regarded as the granddaddy of the violent first person shooting game genre, and more specifically, the World War II era Nazi-killfest subgenre of first person shooters. Plenty of Nazisploitative games followed in its footsteps, but Wolfenstein 3D broke ground with the the way it so unabashedly used Nazi elements in the game. Asides from the copious swastikas and Hitler portraits in the game itself, the startup music in the game’s first moments after loading is the Nazi anthem “Horst-Wessel-Lied.”

As a player, even though you’re blasting away Nazi after Nazi, and even though you get to kill Der Fuhrer himself, you can’t help but feel a little uncomfortable with all of this Nazi imagery around you. This was an edgy game, one that you played alone in your bedroom after your parents had gone to bed. Maybe you installed it into a hidden directory so they didn’t even know it was on the computer. And if someone came home while you were in the middle of slaying packs of dogs, you made sure to quit ‘n’ save faster than you can say, “Mein leben!”

That was 1992. Now, fast forward to early 2009. Apple has sold over 30 million iPhones. It’s out there in huge numbers, and it’s a symbol of conspicuous consumption. No matter what pretenses of modesty you may have about your personal electronics, part of you wants people to know you have it. You want people to be a little jealous when they see you flip through album art in CoverFlow mode, watch YouTube videos, locate all 30 Starbucks within a three block radius, and of course, play games. In other words, the great thing about the iPhone isn’t just that you can do so many great things with it while on the go, it’s that other people can see you doing great things with it while on the go.

Which brings us back to the dilemma of Wolfenstein 3D on the iPhone. It’s a groundbreaking, classic game, and it’s an absolute blast to play. But its edginess and shameless Nazisploitation are at complete odds with the stylish conspicuous consumption that the iPhone embodies. It’s not really something you can pull out at a party and impress people with, and if you use it on the subway, people glancing at your screen may think you love killing dogs in a swastika infested killing field.

This is me avoiding making an easy joke about fascist imagery.

Content and form aside, Wolfenstein 3D and the iPhone are separated by another gulf: the vastly different meta-narratives of their respective rises to prominence. Wolfenstein 3D was originally distributed as shareware. You couldn’t get it at a video game store, and it wasn’t advertised on TV. Instead, it was spread through bulletin board systems (the dial-up precursors to the internet), disk swapping, and word of mouth. The iPhone, on the other hand…well, let’s just say that Wolfenstein 3D wasn’t launched by a celebrity demi-god CEO at a highly anticipated keynote address. The iPhone had about as top-down of a product launch as you can possibly imagine.

The indie underground hit that you played alone in shame has now come to the mass-market epitome of conspicuous gadgetry. No wonder it’s such an awkward match. In fact, it’s kind of amazing that Apple allowed this to be distributed through its content-controlled app store. Porn, violent graphic novels, and apps with foul language are verboten. Apple clearly has an image it’s trying to uphold. It doesn’t want the iPhone to be the device to support seedy, socially unacceptable activities. It wants the iPhone to be a delivery platform for mainstream mobile content. Mainstream means a lot of people want it, and mobile means that it’s with an iPhone user wherever (s)he goes. Mass appeal, mass exposure, mass sales.

Wolfenstein 3D, with its Nazisploitation and dog killing galore, clearly runs afoul of this clearly cultivated image. But maybe Apple is making this exception knowing that it has the public filter to fall back on. They can make Wolfenstein 3D available to appeal to the hard core gamer audience, but they know that because it’s not socially acceptable to play this game in broad view of the public, there’s no danger in the iPhone becoming the NaziPhone or the KillPuppiPhone.

So what’s a gamer like me to do? I’m trapped by Apple’s devious plot: I bought the app, but then realized I can’t easily play it on the go. So I play it at home for a few days and realize how this defeats the purpose of playing games on the iPhone. I guess I should download some other games like Crash Bandicoot and play that on the subway instead. 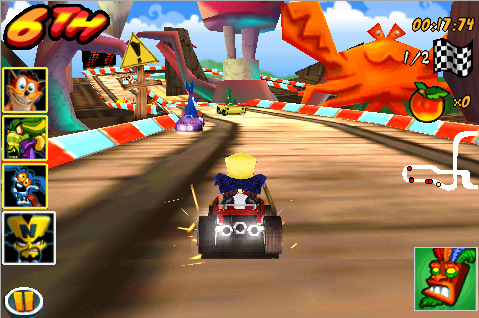 This is so much less satisfying than killing Nazis and dogs. Damn you, Apple! Damn you, social norms!

15 Comments on “Wolfenstein 3D and the iPhone: The Odd Couple”