Recently, I’ve been doing film reviews for The Rotten Tomatoes Show on Current TV. Or rather, I’ve been doing pieces of film reviews. Current gets a bunch of bloggers, comedians, and other web-types to weigh in on each movie, and then splices them together into frankenreviews. So here’s 10 seconds of me talking about Knowing.

The movie is directed by Alex Proyas, a guy who built up a nice geek following with The Crow and Dark City (which is like a beta version of The Matrix). Then he squandered it by doing I, Robot. Knowing isn’t likely to do much for Proyas’ reputation. It’s not bad. It’s just kind of by-the-numbers. (Ha ha. That’s a joke. “Numbers,” cryptic hidden messages, get it?) 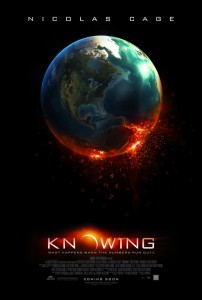 Nicolas Cage plays an MIT professor whose son receives a message out of a time capsule. It’s a string of numbers (see, get it?), that turn out to be the dates and coordinates of every major disaster of the past 50 years… and a few that haven’t happened yet.

Here’s something that annoyed me right off the bat. Nicolas Cage spends literally about 30 seconds looking at this page of numbers before he figures out exactly what they mean. (It helps that the very first numbers he happens to notice are “91101.”) I feel like in real life, you could give that list to a team of code-breakers for a month, and they’d still come up empty-handed. But since the movie makes a big deal about destiny and fate, they sort of get a pass on this. Nicolas Cage figures out the list because he was meant to figure out the list. The plot is implausibility-proof.

I thought Knowing started off a little slow. We all know from the trailer that the numbers predict a bunch of disasters. Until Nicolas Cage figures that out, nothing interesting can happen. But once the movie gets up to speed, it did suck me in a little bit. Like in The Ring, the main character tries to defeat the supernatural via some hardcore research. You will see a LOT of Nicolas Cage Googling in this movie.

About halfway through the film, it feels like they’re going to have a Hollywood ending where Nicolas Cage stops the disasters and makes out with the chick from Damages. But I’ll give Knowing credit – it starts dark and just gets darker. You may not like the ending, but you can’t say that the movie chickened out. 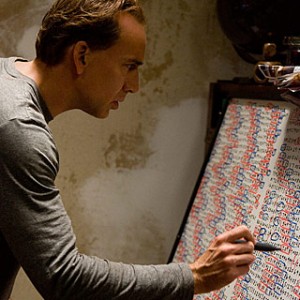 This was the second consecutive movie I saw (after Watchmen) which was about impotence and futility in the face of preordained disaster. Dr. Manhattan predicted catastrophe in his very first scene. Despite all his powers, he can’t stop it. Nicolas Cage knows the date and location that horrible things are going to happen. In another (probably worse) movie, someone could use that information to STOP the disaster. But it turns out that knowing does you a fat lot of good. (The title of this post isn’t just an allusion for the sake of allusion.)

The Overthinker in me sees some powerful pop psychology at work. We’re all living through a giant economic disaster. Economic Armageddon. And maybe we all saw it coming. Certainly, after reading countless articles about how worthless all these default credit swaps really were, this crash should have surprised no one. There’s something unsettling in watching Nicolas Cage watch the news, waiting for the latest bombshell to hit. I know that feeling.

However, the realist in me knows that Knowing and Watchmen have absolutely zero to do with the economy. Those movies were both in development for years, and they’d wrapped shooting well before the bottom dropped out of the stock market. As much as I’d like to see Knowing as a financial allegory, the timing doesn’t make sense.

I’m certainly not the first person to point out that this feels exactly like something M Night Shamalyan would make. (The only difference is he would have written a big annoying part for himself.) Actually, it feels a lot like something he already DID make. Here’s a handy chart comparing Knowing to Signs. 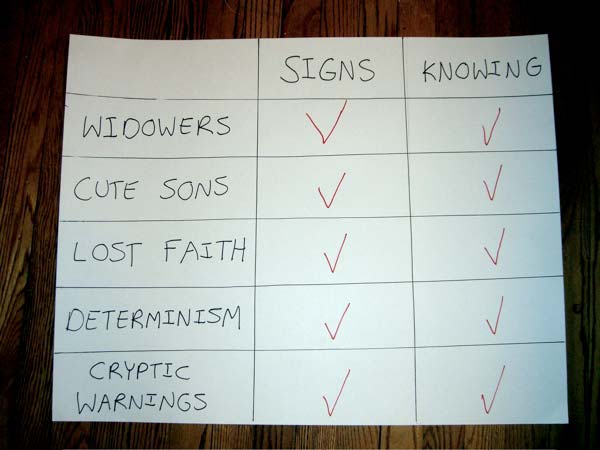 The main character in both Signs and Knowing is a man devastated by the violent death of his wife. Both are previously religious men who have lost their faith. Both men discuss whether events are random or predetermined. Both men have a cute little boy. Both men are faced with evidence of a possible global catastrophe. 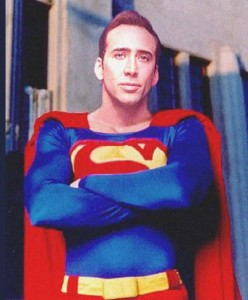 I have no idea where this image came from. But it's creeping me out.

I do, however, have one observation I’m pretty sure no one’s noticed yet. Nicolas Cage is pretty much a Superman fanatic. He collects the comic books, he was once supposed to play Superman in a movie, and he even named one of his sons Kal-El, Superman’s krypton name. Now in knowing, Cage plays a brilliant scientist who becomes convinced his planet is doomed. He can’t convince anyone he’s right, but he’s determined to find a way to save his only son. And I don’t want to give the ending away, but let’s just say the Superman parallels become pretty strong in the final reel.

Aw hell, maybe I will give the ending away. Are you sure you don’t mind spoilers? Last chance.

Okay, tell me I’m crazy about the Superman thing. In the third act, we learn that the world is coming to an end, because the sun is shooting out a “super flare.” (Sun-related planet destruction, sound familiar?) The creepy guys that have been stalking Nicolas Cage’s son turn out to be benevolent aliens. They are going to send a small group of children away to escape Earth’s fate. Cage says a tearful, Jor-El-esque goodbye to his boy, who goes up in a spaceship. The planet is consumed by pretty fire. And the last shot of the movie is the kid, running off to explore his new home planet.

I’m guessing that when Nicolas Cage signed on, the ending slowly got Supermanized. Just a guess.

Anyway, thanks a lot to the people at Current for inviting me to be a part of this project. You can see other snippets of me in their review of Street Fighter and their review of 12, the Russian remake of 12 Angry Men.

By the way – you might not want to make any big plans for October 19, 2009. Just in case Nicolas Cage’s numbers are right.

8 Comments on “Knowing is NOT half the battle”