“A MAN CHOOSES. A SLAVE OBEYS.”

BioShock is the story of John Galt’s paradise run amok.

You play an anonymous stranger (other texts give you the name “Jack”), stranded when a passenger plane crashes in a trans-Atlantic flight in 1960. You discover an uncharted lighthouse and a bathysphere that leads you to a breathtaking underwater city. This is a secret hideaway for creators—artists, surgeons, engineers and traders who all felt stifled by the world above them. Refusing to choose between the imperialism of the U.S., the mysticism of Judeo-Christian faith or the collectivism of the U.S.S.R., they choose a fourth way out—the city of Rapture.

Unfortunately, the idealism of Rapture does not bring peace. The biologists in Rapture discover ADAM—the stem cells of a newly-discovered species of sea slug. ADAM not only promotes incredible strength and regeneration in mammals, it also allows the rewriting of the genetic template. Humans can use ADAM to grant themselves incredible powers: the ability to create fire, to turn invisible, to manipulate objects telekinetically.

ADAM comes in very limited supply. However, surgically implanting a sea slug into a young girl turns her into a breeder of ADAM—a “Little Sister.” An entire generation of adorable moppets are turned into walking batteries of genetic fuel.

The scarcity of ADAM begins to stratify Rapture. Class resentment grows, as disenfranchised citizens attack Little Sisters for the ADAM they carry and the rich barricade themselves behind labyrinths of security drones and genetically-enhanced bodyguards. The Little Sisters receive protectors to keep them from being rounded up like cattle—”Big Daddies,” lumbering ogres in armored diving suits who attack with animal ferocity. A mobster named Frank Fontaine rises to power in the undersea city, attracting followers before he’s gunned down in a fiery battle.

It’s into this fracturing city that you descend in your rusting bathysphere. The beautiful Art Deco architecture has begun to crack, flooding the corridors of Rapture with oil and water. Perky public service announcements warn against dealing with parasites, even as insane “Splicers” attack Little Sisters for their cargo of ADAM. All you have is a wrench, a shortwave radio—and a choice.

John Galt, in Atlas Shrugged, serves two opposed purposes—the creator and the destroyer. He invents amazing machines that make futuristic advances possible, but he also sabotages the world around him in guerilla warfare. BioShock splits this character into those two separate roles.

The creator, Andrew Ryan, is a business tycoon and genius of electrical engineering. He’s the one who created Rapture, powering it with geothermal energy from sub-oceanic volcanoes. He considers every attempt to share or tax his wealth the work of parasites. He fled the surface world in 1947, building Rapture as a haven for creators who wanted to avoid the reach of governments.

The destroyer, Atlas, is a populist hero who rises to oppose Ryan. He strikes back at Big Daddies and Little Sisters, liberating ADAM to power his allies. He sabotages the machinery keeping Rapture intact under the ocean. Smugglers keep him supplied with arms and ammo. His sympathizers are publicly lynched in Apollo Square, but his popularity grows. Posters of a faceless hero begin to appear on walls everywhere: “WHO IS ATLAS?” 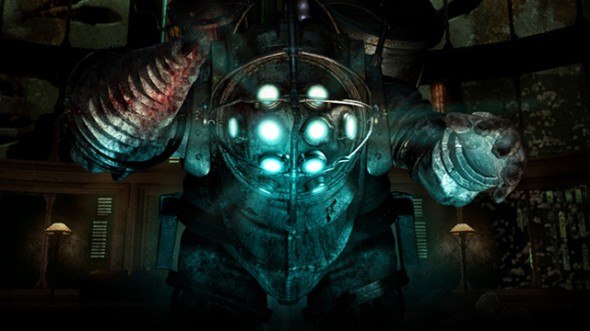