[This continues our coverage of New York Comic-Con 2009]

While Miley Cyrus’ Asian Eyes were spreading controversy throughout the interwebs, a group of Asian-American comic book authors and illustrators were at New York Comic-Con promoting their upcoming anthology of Asian American superhero stories, Secret Identies. OTI’s writer of the Asian persuasion was there, of course. Not surprisingly, the portrayal of Asian-Americans in pop culture is an issue near and dear to my heart, so I was intrigued to see how their work deals with the oh-so-sensitive subject of race and ethnicity. 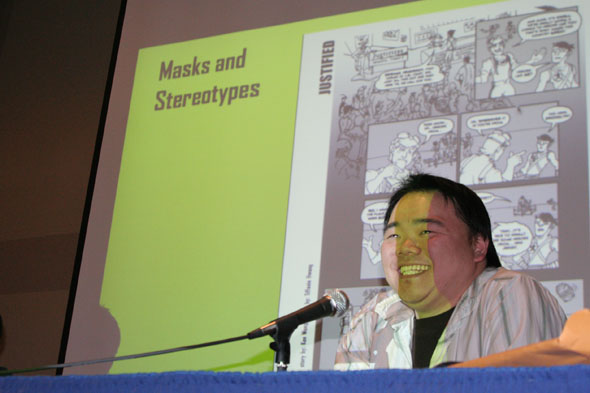 The editors of the anthology started with a simple premise: Asian Americans as creators are well represented in the comics world, especially compared to other creative spheres such as movies, TV, etc., but they are poorly represented on the pages of comics themselves, just as they are in those other forms of pop culture media. Since the barriers to presenting Asian characters are lower with comic books compared to TV or movies, putting together a collection of Asian American comic book stories seemed like a no-brainer.

Thankfully, the rumor that The Mandarin would be in the next Iron Man film turned out to be just that.

Their panel discussion touched on a wide variety of themes, from stereotypical portrayals of Asians in comics (e.g., the Mandarin) to the general need for more diversity in mass media. Overall, the panelists spoke convincingly on their views on portrayals of Asians in fiction and on their motives behind putting together this Asian-American superhero anthology, but to some extent, they revealed a paradoxical “have your (rice) cake and eat it too” mentality that Asian-Americans have been struggling with for years.

Allow me to explain what I mean by this (gross over-generalization to follow; you’ve been warned). Basically, Asian-Americans want to be seen as a minority group that needs special consideration, while at the same time we don’t want to be seen as a whiny self-victimizing “other” minority group that needs special consideration. We cry foul when white actors get cast in non-white roles (those parts should go to Asians; we have so few to begin with!), but when Asian actors do show up on screen, we don’t want them to be overtly defined by their ethnicity. We want a comics anthology dedicated to Asian American superheroes , but we don’t want their Asian-ness to dominate the stories. In our family lives, we want to preserve things like food, language, and customs that set us apart from the mainstream, but we also want our kids to get into Harvard, Yale, and Princeton, those bastions of the white American establishment.

It’s tough to strike the right balance of portraying the “other” versus the “familiar” when telling stories about minorities, particularly in the context of an anthology that exists specifically for that purpose. I for one look forward to reading it when it comes out in April to see how well this anthology strikes that balance. Until then, you can check out a preview on their website (PDF, 5.5 mb). One of the panels from the preview is below:

I think Miley Cyrus should get a free copy.

Or read more from… Comics, Featured, asian american, comic-con, comic-con 2009, ethnicity, have your rice cake and eat it too, race, Secret Identities, stereotypes

One Comment on “NY Comic-Con: Asian American Superheroes to the Rescue!”