Alcohol advertisers are well known for bombarding their audience with nonsensical imagery, but Stolichnaya Vodka really takes the cake with their new campaign, “The Wild Wild West Is In The East.” 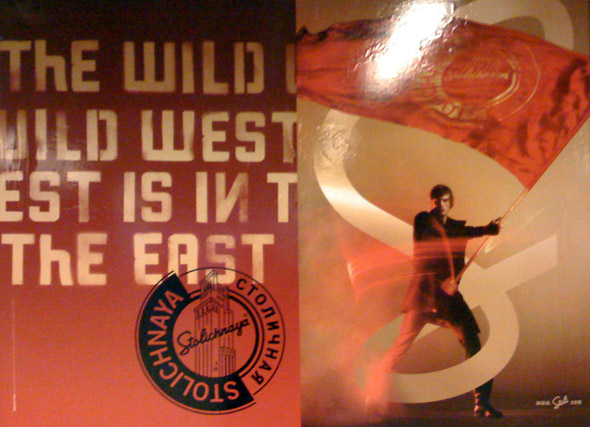 This may be a New York only thing. Let me know in the comments.

Don’t worry if your immediate reaction was confusion, followed by more confusion over your confusion. Mine was too.  Stoli’s previously established practice of using overt Soviet imagery was perplexing by itself, but they’ve really taken it to a new level by invoking the American Old West and the New Russia on top of the communism.

How can we make sense of this nonsense? Read on for three different interpretations. Martinis will be served, after the jump. 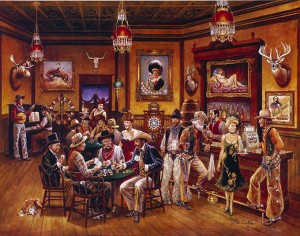 Where everybody knows your name

The popular conception of the Wild West has a pretty well established association with both lawlessness and alcohol consumption. This combination of danger and boozing seems like a winning combination for selling alcohol to mindless 20-30 year olds, but cowboys and bandits in dusty saloons would need a modern Russian twist to fit the trendy Stoli image. Thanks to the rise of the Russian mafia/robber-baron class and the trendy Moscow club scene, the cowboys and saloons now have their hipper, richer, sexier eastern counterparts (the androgynous flag-waving guy in the poster, I guess).

Now throw some Cold War espionage into this mix: 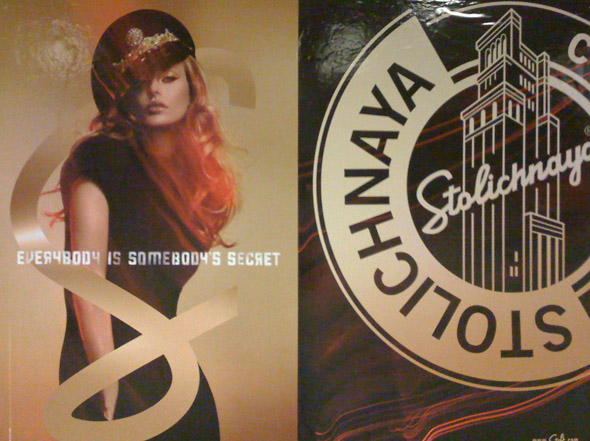 The meaning of this ad campaign is somebody's secret

Presumably, these espionage-related taglines (“Smooth like an alibi,” “Everybody is somebody’s secret,” “Admit to nothing,” etc.) are meant to evoke a different kind of lawlessness, or at least a sense of danger, in this Wild Wild East. But it also evokes, you know, stodgy totalitarian communism, which is about as far as you can get from the freewheeling glam-capitalism of the new Russia.

Stoli is definitely aware of this, which is why they’ve toned down the overt communism references for this campaign, but that huge red flag leaves no doubt that they still want you to think about the ol’ USSR when you think about Stoli. In case you needed help connecting the dots: 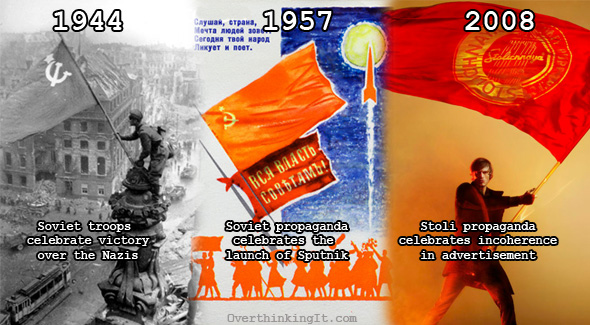 Maybe the lawlessness theme isn’t the right track.  What, then, do cowboys, communists, and capitalists have in common (aside from the letter C)? They’re all pure, simple, alcohol-drinking archetypes that we can rely on in this time of uncertainty and ambiguity.

Consider the cowboy in the saloon. We know what to expect from him. He’s looking to unwind after a long day of shooting bandits and Indians. He’s going to play poker in the saloon, drink the closest thing they had to Stoli vodka in the American 19th century, get into a bar fight, and sleep with a prostitute.

Consider the Soviet spy. We know what to expect from her. She’s a true believer in Lenin’s Revolution and is willing to do whatever it takes to defeat the western capitalist pigs, including seducing a diplomat with Stoli vodka, sex, and money.

Consider the robber-baron Muscovite. We know what to expect from him. He’s looking to unwind after a long day of exploiting high energy prices and intimidating his enemies. He’s going to hit the trendiest clubs, order the most expensive Stoli vodka bottles for his entourage, and sleep with at least three hot Russian models.

Except that we don’t really have the robber-baron, club-going Muscovite archetype in “western” popular culture. Stoli may be invoking the other two archetypes in an attempt to create this third one, but if that were the case, they probably should have employed a mascot. No, not the hot models and the androgynous flag dude used in the posters. I’m thinking of an icon that both captures the essence of the new Russia and is immediately recognizable to “western” audiences. Allow me to suggest one: 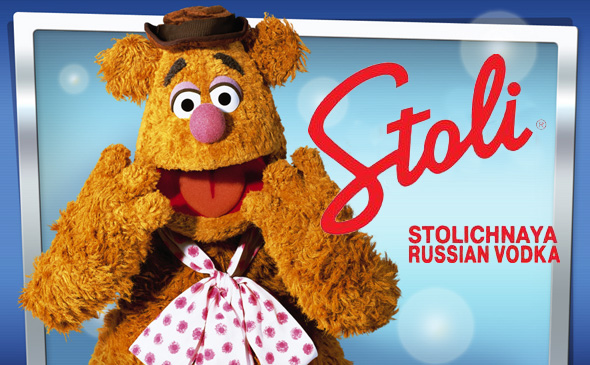 Get it? The Bear is an iconic representation of Russia! Waka waka waka!

I give up. Nobody’s fooling anybody here. I’ll let this blurb from AdFreak do the talking:

What we’ve got here are jumbled pop-culture references from different eras and places: a vaguely ’60s James Bond/spy motif, along with “hot” ’80s imagery (those lips remind me of Miami Vice) and a tag that conjures images of the supposedly lawless American Old West. It doesn’t really gel, and the press release compounds the confusion by explaining that the goal is to evoke the “anything-goes sensibilities of modern-day Russia” while maintaining a brand experience that’s “independent of geography.” There’s also some talk about “a Russia of the mind.”

That’s a lot less fun than a Fozzie Bear Stoli mascot, but I’m afraid that no amount of Overthinking can make sense of this mish-mash of pop culture references.

I need a drink. Readers, any alternative explanations?