[Because what Overthinking It really needs is more Matts, we present this BTTF guest post from Matthew Silver. —Ed.]

Arguably, no movie involving time travel can ever actually make sense in the realm of continuity. I have to give tremendous credit to the Back To The Future writers for taking it on in the first place. This series has it all: paradox, parallel timelines, and altering history both past and future.

As an audience, we all cope with the discrepancies in different ways. Some of us rationalize the impossible because it’s the only way we can enjoy the reality presented to us. (Have you seen Heroes this season?) Some of us believe wholeheartedly in “suspension of disbelief” and are all too understanding of the limitations of Hollywood (Ross, Joey, and Chandler love the Die Hard films, yet they don’t hesitate to accept Bruce Willis when he shows up on Friends as a guest character). And then there are those of us who just unconditionally believe everything we see and hear. [Not on this site. —Ed.]

For those of us who will never be satisfied without a little digging, I present the following theories.

We’re all familiar with this example of a paradox because it drives the plot for Part 2: As Marty and Doc are distracted in the future, old Biff steals their time machine and goes back in time to hand his past self a sports almanac. This creates a paradox that even Doc Brown himself admits could be disastrous, since a person interacting with him/herself in the past or future could destroy the universe. 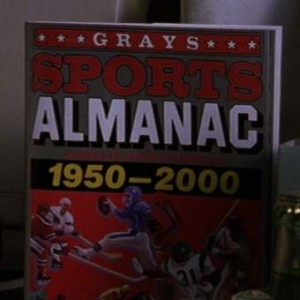 Doc Brown’s revelation implies that he subscribes to traditional timeline theory, in which there exists one single timeline. Not being a member of clergy, I can’t speak specifically to what in life could actually trigger an apocalypse, but I do agree that Doc presents a major paradox: According to this theory, old Biff should be creating memories for himself at the exact same time he speaks to his younger self, which could be disconcerting to say the least.

Furthermore, by handing himself that book, he is altering young Biff’s path so significantly that old Biff should have a completely different personality. For one, young Biff now becomes extremely rich and powerful which would make anyone a different person in the future; and for another, this new Biff probably doesn’t have a reason to go back in time and hand himself the book in this newly created future, thus severing the circle of time. 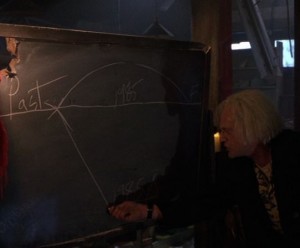 He walks the line.

In order to account for these discrepancies without completely discarding Doc’s belief in traditional time travel theory, we have to assume that the “final” timeline is predestined.

For example, when Marty and Doc travel back in time and discover Biff’s alternate reality, this is a temporary tangent, not the “final” timeline. Ultimately, Marty does recover the almanac from young Biff and restores his original reality.

Even though Marty doesn’t save the day until the end of the movie, this certainly doesn’t mean that it hasn’t already happened in the “predestined” timeline. We don’t follow old Biff’s story once he returns to the future, but his plan could have already failed, assuming the predestined timeline prevails. 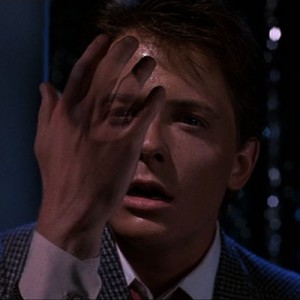 That's just bad compositing. Oh, also it's a rip in the space time continuum in the process of being "reset."

Even with a predestined timeline, these theories are certainly not without their paradoxes. Each timeline does “exist”—we see them both in the movie. So which timeline is real?

Apparently, the answer is in the eye of the beholder. Only our heroes, the time travelers, are aware of the transition. (Why doesn’t Marty have any memory of his new past?)

This brings us to the theory of a displaced timeline, in which we assume that a significant change in the fabric of time will cause it to rip. In order to heal itself, it must reset to allow for this alteration. This “reset,” however, takes time (as evidenced by Marty slowly being erased from existence in Part 1), suggesting that the time travelers have a chance to “repair” the altered fabric before it resets.

Following this thinking, if Marty and Doc had taken too long to retrieve the almanac from young Biff, their memories would have reset to the new “healed” timeline (where Marty is Biff’s stepson and Doc has been committed). Sadly, this theory hits a snag here – what happens when there are multiple time travelers at once? I’m not even going to begin to pretend that I can wrap my head around that one. Puzzle it out in the comments, if you can. 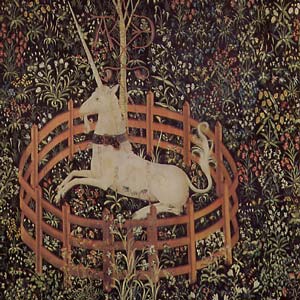 Let’s think outside the box. Let’s say that life is a “tapestry” of time, with various threads moving about in different directions, sometimes converging, but never traveling along one straight timeline.

When old Biff travels back in time, he could actually jump to another thread and create an alternate reality different from his original reality. Marty and Doc don’t notice the difference until they travel back in time and discover the altered thread in their originating time.

This theory offers an explanation for why the entire world doesn’t change around Marty and Doc in the exact instant that Biff disappears in the stolen time machine (as it would on a single timeline), and why Doc believes it would be fruitless to return to the future once they’d traveled back in time and discovered what Biff had done.

I don’t think that the writers of Back To The Future took any theories into consideration beyond traditional, and since traditional theory is flawed, I can only assume that they hoped suspension of disbelief would fill in the gaps. I can’t really blame them, because after all Back To The Future is a family movie aimed at the more casual time traveler.

With all the paradox, altered realities, and suspension of disbelief, why then are we able to smile and love this series? I guess because it’s awesome. Honestly, the only real travesty is that it is now closer to 2015 than 1985, and we don’t have hoverboards, or movie posters replaced by giant holographic sharks. 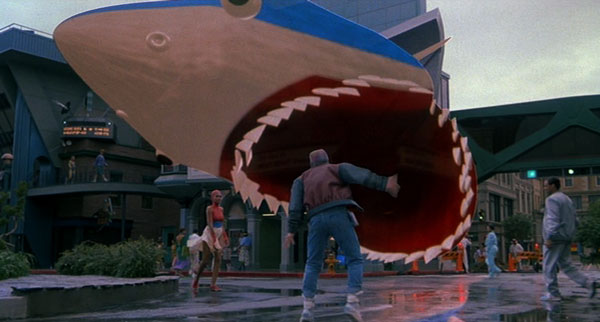 If you have (ahem) time on your hands, I’d be curious if you find that any of these theories fit elsewhere. The theories behind Lost may be unanswerable until 2010, but it seems to be playing out a combination of predestined and displaced timelines. And this one is a bit more esoteric, but if you’ve heard of an old video game called Shadow of Destiny, it’s an excellent example of tapestry timeline theory.