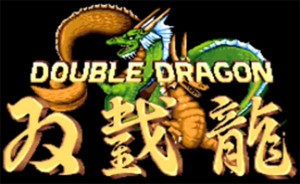 Anyone who grew up with a controller in his sweaty little hands had at least one moment when a video game touched him emotionally. For some people, it was Sephiroth turning your girlfriend into a shishkabob. For others, it was Snake visiting Arlington Cemetery. But my most mind-blowing gaming experience was when I beat the Double Dragon arcade machine.

Actually, scratch that. I finished it; I don’t think I really beat it.

It was my freshman year of college. One rainy Saturday afternoon, my roommate Joe and I were contemplating the possibility of doing some actual work. Instead, we headed to Cutler’s Records, which had a row of classic arcade machines in the back. Our plan was to use only three dollars in quarters to win Double Dragon (and possibly pick up the new Britney Spears album while we were there).

We watched as the lovely Marian was gut-punched and dragged away by the Black Warriors. Then a garage opened and our two protagonists emerged: Billy and Jimmy, karate masters with tempers as fiery as their mullets. Joe and I cracked our knuckles and proceeded to crack dozens of digital skulls. The fighting raged through the city streets, a factory, a forest, and finally the headquarters of the street gang, which appeared to be some sort of Pagan temple.

Joe and I weren’t particularly adept, and the quarters balancing on the screen started to disappear at an alarming rate. But finally, we entered a room and saw Marian chained to the wall. At this point, we were low on health and cheering each other on loudly enough to scare everyone out of the World Music section of the store, which was probably just as well. A couple of jump kicks later, the last bad guy hit the floor and disappeared. We’d won.

Then, we saw this… 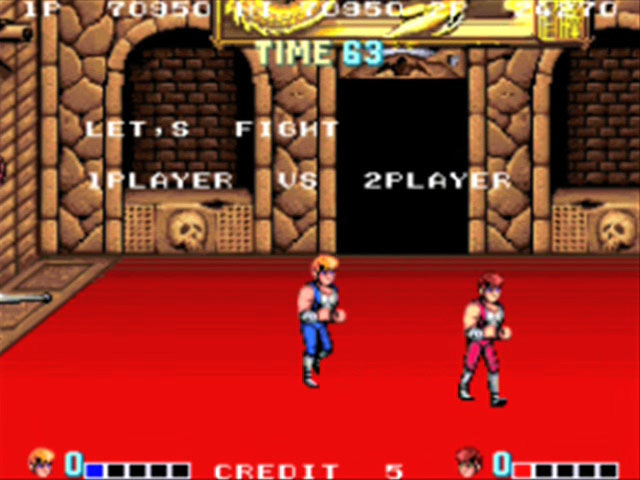 THWAK, I said, instantly jump-kicking him in the face.

“Sorry,” I mumbled with a vicious elbow. “Gotta kill you. Game told me to.”

Okay. I understand that this duel probably served a practical purpose. Most likely, the programmers already had an ending where Marian walks up to Billy (Player 1) and kisses him, and they didn’t want to figure out a different one for when there are two players. So they just made us fight until there was only one person for her to kiss. However, necessity is the mother of invention, and the “brother against brother” ending is a masterstroke on two levels.

First of all, it elevates the narrative to classic noir. At the beginning of Double Dragon, you assume Jimmy’s motivation is simply helping his brother, because that’s what brothers do. But when they turn on each other, we understand his true motives: Jimmy wants Marian for himself. In fact, he was probably rooting for the hordes of gang members to finish Billy off. When they don’t, Jimmy has to reveal his true motives and attack his brother. 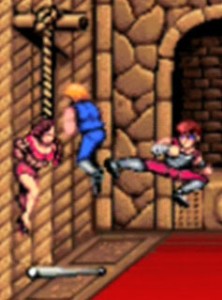 And what about Marian, hanging there on the wall, watching everything unfold? What is she thinking? Well, if Billy wins, then her smooch and embrace are entirely natural. But if Jimmy beats his brother – her boyfriend – to death, and then she drops to the ground and kisses him… wow. We can only assume that she and Jimmy have been secretly involved for years, all the time dreaming of the day when they can get rid of poor, dumb Billy. When the police show up at Black Warrior headquarters, Jimmy can tell a tearful story about how Billy was killed by Abobo, and no one will doubt him. I can even imagine a scenario in which Marian and Jimmy staged her entire kidnapping, to get Billy into a situation where they could rub him out, scott free.

Double Dragon really is a fantastic co-op experience. You can each tackle half the bad guys, or one player can take on the bulk of the work, protecting his friend. The game requires constant communication and teamwork. It is an experience guaranteed to build friendships… which is why the ending is so devastating.

The only honorable ending.

What I wish I’d done that rainy afternoon, when Double Dragon told me to punch Joe in the face, is back away from the machine. I wish we’d left Billy and Jimmy standing there, the clock slowly ticking down to a double “Time Over.” That would have been our greatest victory. Instead, I beat the crap out of my friend, because the game told me to. Joe fought back, but since I struck first, I had an advantage. So not only did we fight, it wasn’t even a fair fight. And when his lifeless body disappeared and the surprisingly sexy pixelated girl jumped into my arms, the words “May you live happily forever” seemed like a sarcastic taunt. 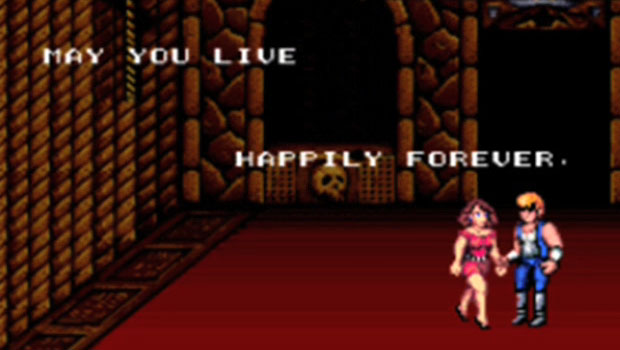 ... right after you dispose of your brother's mangled corpse.

There would be no Britney Spears purchased that afternoon, and Joe and I didn’t talk much as we walked back to the dorm. As the November rain chilled me to the bone, I had to marvel at what had just happened.

I hadn’t beaten the game at all; the game had beaten me.

9 Comments on “The Darkest Ending in Video Game History”