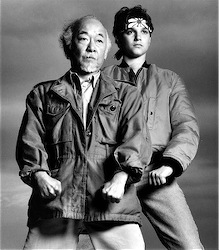 [Karate Kid Week continues with another–more lighthearted–look at Mr. Miyagi, this one from guest writer Trevor Seigler. Let us know what you think in the comments; our guest writers are perpetually entered in the All-Valley Blogging Tournament of your approval (and your favorites might attain the Elizabeth Shue of membership in the elite cadre of OTI staff writers.) –Ed.]

A lot of Asian-Americans have issues with Pat Morita’s portrayal of Mr. Miyagi in the “Karate Kid” series. He’s a crude stereotype who conforms to the idea of the noble savage in that he’s steeped in a foreign and alien culture but able to help out the white man and thus become a “credit” to his race.

All that is true, but I think Mr. Miyagi is guilty of another crime altogether: He’s Yoda in blackface. 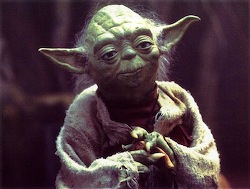 The funny sayings, the repetitive lessons, the sudden revelations that dude knows what he’s talking about, and the ability to instruct a white protagonist in the ancient ways of a bizarre subculture are shared traits between the two. Hell, Miyagi was probably supposed to retrieve Daniel’s X-wing from a swampy grave before the screenwriters realized that they might give away their source of inspiration.

It feels like the makers of The Karate Kid saw The Empire Strikes Back and said to themselves, “yeah, the whole plot where Luke battles Vader, Han and Leia fall in love, and the Empire almost crushes the rebellion is nice. But what’s all this about a diminutive alien teaching Luke in the Jedi arts? That could be a whole movie! Think how much money we could make, and in turn how much cocaine we could buy to fuel our sequel scriptwriting sessions afterwards!”

Perhaps they even paid for plastic surgery to make Morita’s ears more pointy; I can’t verify this, but if I write it in the film’s synopsis on Wikipedia someone is bound to believe me. It’s the “Cheers/Frasier Continuum” in full effect: take a minor character who really plays off the main characters and give him his own format in which to be a snobby, insufferable and latently homosexual asshole. And keep plugging away at it until people have had enough.

George Lucas, get your lawyers working on this right away. After three sequels, plus residuals from God knows how many endorsements back in the day (“Cobra Kai Cereal: Sweep the legs off your breakfast table!”), the producers have got to be rolling in the cash. Yoda and Miyagi are one in the same, it’s only a matter of time before the world believes me on this one.

Now if you’ll excuse me, I’m hard at work on proving that Superman and Clark Kent might be the same person. My evidence? Take away the glasses and Clark isn’t near-sighted at all.

9 Comments on “Use The Force, Mr. Miyagi”