It took the Vatican 522 years to admit “mea culpa” on the Spanish Inquisition, and 359 years to come around to admitting Galileo was right about the whole Sun and Earth thing. However, it looks like the Church has tightened up its “oops, we’re an ancient bureaucracy and take forever to admit we were wrong” process by forgiving John Lennon only 42 years after his “more popular than Jesus” comment sparked outrage among Christians. 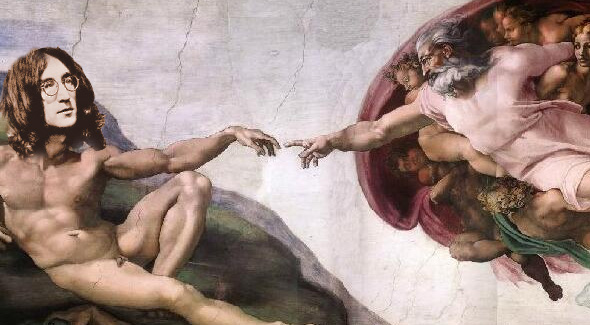 Lennon’s absolution should give hope to other pop culture icons that have been on the receiving end of the Church’s wrath in recent years, including Sinead O’Connor (tore up picture of the Pope on SNL) and Dan Brown (author of The Da Vinci Code).

But let’s stop and Overthink ™ this for a second. Why does the Catholic Church repeatedly get itself into trouble by issuing official condemnations on pop culture? Is the Church just digging itself deeper and deeper into a hole of cultural irrelevance?

Make the sign of the cross and genuflect before reading on.

Thou Shalt Not Overthink

Any conversation on this topic inevitably goes back to the supposed list of Banned Books that the Church maintains. First, to set the record straight:

Some of the reasons were practical: enforcement of such a list might have been easy in the 16th century, when the total volume of printed books was relatively small, but impossible in the age of cheap and widespread printing (to say nothing of the Internet. Can the Vatican please condemn MySpace? The whole damn thing? Kai thx). Others were more philosophical and in line with the Church’s gradual (yet painfully slow) modernization process. Believe it or not, the Church has made efforts to reverse some of its anti-intellectual practices beyond issuing long overdue apologies to folks like Galileo. The Vatican has its own Observatory, and no, they’re not looking for cherubim and seraphim with their telescopes. Catholic universities routinely teach from books that were on the list. And the Vatican has consistenly defended Darwinian evolution in the face of fundamentalist Christian efforts to spread creationist beliefs.

So we’re all agreed that the church doesn’t have a list of banned books anymore and, at least in some areas of science, is in step with the modern world. But what about…all that other stuff? John Lennon, Sinead O’Connor, and The Da Vinci Code are only a few examples of targets of thunderbolt condemnations from the Holy See in the late 20th/early 21st century. The Last Temptation of Christ, The Golden Compass, (okay, maybe not, but I’m sure if the Pope saw it, he found it unpleasing to God), and numerous other works have all gotten the Vatican Condemnation treatment recently. In other words, the Church isn’t fully out of the “Thou Shalt Not Read/See/Listen” proclamation business.

To understand this behavior, first we need to understand what kinds of cultural works get the Vatican seal of disapproval. Not everything which depicts distasteful or morally objectionable content does. Superbad (teen sex)? Saw I, II, III, IV (sadistic torture)? Get Rich or Die Trying (where do I start…)? Nary a peep from Rome. The Vatican is smarter than that. Though the Church routinely and vocally states its positions on a variety of moral issues, it saves its pop culture condemnation ammo for what it perceives as the biggest threats: those that attack the foundations of the Church’s authority.

The Power of Pop Culture Compels You 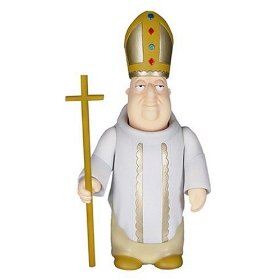 Remember that the Catholic Church regards itself as Christ’s one true representative institution on Earth because it can trace its line of Popes back to Peter and Jesus H. Christ himself: “You are Peter, and on this rock I will build my Church, and the gates of hell will not prevail against it” (Matt. 16:18). So upon this rock the Church was indeed built, and in spite of thousands of years of missteps, popes that were bad dudes, and policies that would be considered war crimes today, this concept still holds very strong in the Church’s perception of itself. In other words, the Church cares very much about its back story, and anything that undermines this back story, even just a little bit, could plant millions of seeds of doubt into the minds of Catholics who will start questioning the Church’s authority on issues one by one until there’s nothing to believe in anymore.

The Da Vinci Code and The Last Temptation of Christ are all the most direct examples of these sorts of threats. Both challenge the validity of the Church’s origin story: Christ’s celibacy, divinity, etc. Other targets of the Vatican’s wrath are less direct attacks, yet still meet two important thresholds. The first is undermining central tenants (as described above), the second is notoriety. One guy standing on a street corner passing out literature isn’t going to plant those millions of seeds of doubt. Only the popular culture has that sort of power.

Let’s go back to two of the other examples cited above and examine them through these criteria:

Imagine There’s No Heaven (for those who deny Jesus)

Finally, we come back to John Lennon and his “more popular than Jesus” comment. What was it exactly that he said that caused 42 years of unforgiven condemnation?

Christianity will go. It will vanish and shrink. We’re more popular than Jesus now…I don’t know which will go first, rock ‘n’ roll or Christianity. Jesus was all right, but his disciples were thick and ordinary. It’s them twisting it that ruins it for me.

Lennon later said his words were meant in jest, and that he’s “one of Christ’s biggest fans,” but the damage was done when that comment spread throughout all of Christendom. Rock ‘n’ roll might outlast the Church? Remember that in 1966, rock ‘n’ roll had been in existence for about 10-15 years, while the church was 1,966 years strong and counting. Also remember that The Beatles in 1966 commanded a cult of personality that any religious group would have been rightly jealous of.

So put yourself in the 1966 Vatican for a moment.  You can even imagine yourself wearing robes and a pointy hat, if you’d like. Are you there? Good. You’re charged with maintaining the Church’s influence over its flock, which has held strong for thousands of years. Recent years have brought about massive cultural change which has caused many to start questioning the Church’s authority, but mostly through pop culture which only indirectly poses a threat to the Church via its real or supposed loose moral standards. Now along come The Beatles. You’re worried because The Beatles command the sort of unwavering loyalty and obsession that the Church used to, before this whole “modernity” thing started to catch on. The center of cultural power has made a significant shift away from Rome towards the record players and TVs in living rooms around the world. If that weren’t bad enough, those boys from Liverpool just claimed that they were more popular than Jesus and that rock would outlive the Catholic Church! This is a serious threat! Bring out the Vatican Condemnation Issuer, before the Beatles start their own Church!

Okay, take off the robes and the pointy hat now. It’s 2006, not 1966. The Church has finally come around to forgiving John Lennon, but only because the threat has passed. The Beatles still have plenty of fans, but no longer do they command the cultish devotion that they used to. But in 2006, though, it seemed like Dan Brown did, and the Church correspondingly turned its attention to him. Remember when every time you rode an airplane, it seemed like every single passenger was reading The Da Vinci Code? Shouldn’t all of those passengers be reading the Bible instead? The Da Vinci Code was undoubtedly a cultural phenomenon. It was threatening to get bigger than Jesus. Time to condemn.

Conclusion: Got To Get Christ Into My Life

The Church will likely continue to condemn pop culture works that it deems both threatening to its authority and well known enough to cause damage on a wide scale. Why is that? Doesn’t it realize that it’s digging itself deeper into a hole of cultural irrelevance?

The answer? No, it’s not digging itself deeper into a hole of cultural irrelevance; in fact, it’s reinforcing its cultural relevance by issuing these condemnations. When the Vatican condemns, people listen. Most dismiss it, but plenty of orthodox Catholics take it seriously, and such condemnations reinforce for them the Church’s absolute moral authority and the strength it brings to the fight against modern cultural evils. The Church probably knows it’s alienating its moderate-liberal members a little bit (or a lot) when it condemns a work of pop culture, but the Church sees this as win-win. To keep the moderates/liberals in line, the Church aims to reinforce its authority and remind moderates that the parts of the faith they hold onto have seriously deep roots. Assuming they still consider themselves practicing Catholics, they’re already holding internally conflicting views of the church’s teachings and authority. They can simultaneously scoff at the condemnation of The Da Vinci Code while appreciate why the Church needs to combat what it sees as heresy in the popular culture. The orthodoxy needs to be reassured that the Church still takes itself seriously. Win-win.

Back to the Vatican apology for John Lennon: how does this fit into the strategy outlined above? Doesn’t the backtracking go against the “defend the authority” rule? A little but, but more importantly, the Vatican knew it had won this battle against Lennon. The Church has survived the following 40 years–not without serious and near debilitating crises, but it’s still here and will be for the foreseeable future. But rock music? I have my doubts:

Hannah Montana: if she’s not bigger than Jesus now, she soon will be.

[The Author is in fact a practicing moderate/liberal Catholic, in case there was any doubt.]

29 Comments on “Vatican 1, Beatles 0: Why the Church still wins after forgiving John Lennon”