We’ve done a lot of Overthinking(tm) of back story  on this site. From Gossip Girl to Batman to Sex and the City, we desperately want to know where our fictional heroes came from. We want to be able to relate even more closely to them than we already do.

Recently, a new hero has risen in our midst. She has no name. We don’t know where she came from, or where she’s going. We only know the nature of her true desire, and that desire has spawned legions of followers on “teh internets.”

I am speaking, of course, of the “I Can Has Cheezburger” LOLcat: 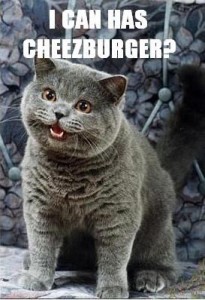 She has a name. It is Bumpkin Lambrini. And this is her story.

Since I am no cat taxonomist, I turned to the Overthinking It Feline Breed Identification Tool (aka “the internet”) to determine that this cat appears to be of the British Shorthair breed. The OTIFBIT reveals several important characteristics of the breed that helped me peer back into our hero’s past:

The back story practically writes itself from here.

Our story begins at the 2002 Southern British Shorthair Cat Club Show, held in, Surrey, UK. The bold newcomer surprised all as she took “Overall Best Exhibit” and “Best In Show – Kitten.” Vicious rumors began to swirl: was Bumpkin really a British Shorthair? Did her owner, Mrs. B. Hollandt, poison the competition’s food supply?

Lacking evidence, the SBSCC never brought charges, but a cloud of suspicion continued to hang over Mrs. Hollandt and Bumpkin. Fearing Bumpkin’s career in the UK was over, Mrs. Hollandt shocked the SBSCC by leaving the country with Bumpkin. She would make her a star in America. She would prove all of her enemies wrong. And someday she and Bumpkin would return to the UK to rule the SBSCC.

Bumpkin couldn’t understand what all the fuss was about. She thought her victory was fairly won.  Sure, she got a little lucky when 3 out of 4 of her competitors came down with a strange last-minute hair ball case, but, hey, that’s showbiz, right?

But the seed of doubt had been planted in her mind. Night after sleepless night she was haunted in her dreams by an orange tabby that she called “mother” and a traumatic fur transplant operation.

“Who am ai? And wair am ai ?” She asked herself as the cover to her pet carrier was lifted after the long flight to reveal the blinding Southern California sunlight.

Mrs. Hollandt wasted no time in kick starting Bumpkin’s career. Though she was on the outs with the SBSCC, she still had enough contacts in the cat fancier world to get Bumpkin an audition at the Hollywood Animal Actors Agency. The HAAA agent had seen a lot of cats that day and agreed to take a look at Bumpkin only to placate Mrs. Hollandt.

He knew right away this was a special cat.  There was something…different…about this British Shorthair, something unlike any other he had seen. Bumpkin was scheduled immediately for a series of cat food commercials.  None were particularly lucrative, but Mrs. Hollandt knew these were the first steps towards landing a role in a feature film, and that feature film role would be their ticket back to the top of the SBSCC.

As shooting began, Bumpkin developed an insatiable appetite for the trappings of stardom. She knew she had graduated from the backwater Surery cat show circuit, and now she wanted to live like it. Gourmet cat food gave way to organic free-range mice. And it wasn’t long before occasional experiments with catnip became a full-blown addiction. She would justify it to herself by the fact that it kept the recurring nightmares away, but that didn’t erase the memory.

Her self-doubt fed her desire for consumption, which in turn fed her self-doubt. Somewhere in this vicious cycle, Bumpkin was introduced to the cheezburger. Perhaps it was the cameraman who took a liking to Bumpkin and decided to start feeding her leftover In-N-Out Burger. Perhaps she found some scraps while walking the streets at 3 am, wondering where her mother was, and if she really was the orange tabby from the nightmare. No one knows how exactly it started, but by the end of the commercial shoot, Bumpkin had developed a voracious appetite for cheezburgers that knew no limits. She rapidly gained weight, much to Mrs. Hollandt’s horror. How would Bumpkin land a feature role in that shape? She instituted a strict diet for Bumpkin, who fell into a spiral of depression and catnip abuse.

When she thought she hit rock bottom, the first commercial began to air:

The commercial set of a firestorm of controversy from animal rights and women’s rights activists. How dare they suggest a sexual relationship between a cat and a woman? Bumpkin was dropped by the HAAA. The SBSCC, hoping to distance the British Shorthair breed from this abomination, sensed the opportunity to finally discredit Mrs. Holllandt. Their DNA test finally proved that Bumpkin was NOT in fact a British Shorthair, but a surgically enhanced mix between an orange tabby and a feral cat of indeterminate breed.

Mrs. Hollandt returned to her family in Surrey in shame. Bumpkin, now abandoned in California, was taken in by an animal rescue group, but the damage was too great to be undone. Unaware of Bumpkin’s past, a kind family decided to take her in, knowing that there wasn’t something right about this cat. With love and affection, Bumpkin’s new owners helped her get back on her feet.  The nightmares are mostly gone, and she’s been off catnip for three years now. But she still feels emptiness and loneliness, and she still hungers.

For fame and fortune.

[Want more Overthought LOLs? Be sure to check out the LOLjoker gallery.]

Or read more from… Culture, backstory, fallen heroes, fan fiction, i can has cheezburger, lolcats

5 Comments on “I Can Has Cheezburger: The Untold Story”