Thanks for visiting Overthinking It, where we take movies, tv, music, comics, and videogames waaaaay too seriously.

While you’re here, check out our other articles, or just the ones about movies.

And check out our podcast (iTunes link).

If you like what you read, you can get all the latest posts by RSS or by email.

I have just finished All Work and No Play Makes Jack a Dull Boy, the debut novel by the late Jack Torrance, and I do not hesitate to call it the greatest English work of the past 50 years. It is nothing short of a complete rethinking of what a novel can and should be. 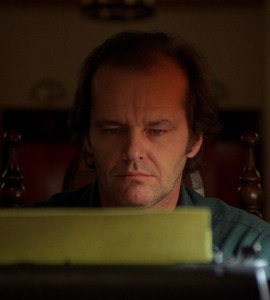 At the risk of spoiling the book, let me repeat what you may well have heard from the tabloid press and late-night comedians. All Work consists of a single sentence, repeated over and over for hundreds of pages. Some will dismiss it as simplistic; that’s like dismissing a Pollack canvas as mere splatters of paint.

It’s true that, taken on its own, All Work is plotless. But like the best of Beckett, the lack of forward momentum is precisely the point. If it’s nearly impossible to read, let us take a moment to consider how difficult it must have been to write. One is forced to consider the author, heroically pitting himself against the Sisyphusean sentence. It’s that metatextual struggle of Man vs. Typewriter that gives this book its spellbinding power.

Sadly, Mr. Torrance’s legacy has been tarnished by his widow. The couple and their young son spent the last winter of his life as caretakers of a remote mountain resort, where he put his masterpiece to paper. Mrs. Torrance has claimed that he tried to kill her and the boy in a fit of madness. Personally, I believe she is the real murderer. Mr. Torrance was found frozen to death in a hedge maze, days after his wife and son abandoned him. I find it likely that this betrayal drove him, if not to suicide, then at least to ignore his own safety during a treacherous Colorado snowstorm.

Thankfully, Mr. Torrance was able to complete All Work before his untimely death. (Although truthfully, the book’s unconventional nature makes it difficult to say whether it’s “complete” or not.) For most of his adult life, Torrance has worked as a teacher, his genius going to waste. Call it poetic justice that the resort at which he became an author is called the “Overlook Hotel.”

All Work out-moderns modernism. It surpasses post-modernism. I can only refer to it as “most-modernism.” I could easily write thousands of words on Mr. Torrance’s accomplishment, but I’ll heed the book’s advice and end my work here. Suffice to say, All Work and No Play Makes Jack A Dull Boy is a shining achievement. 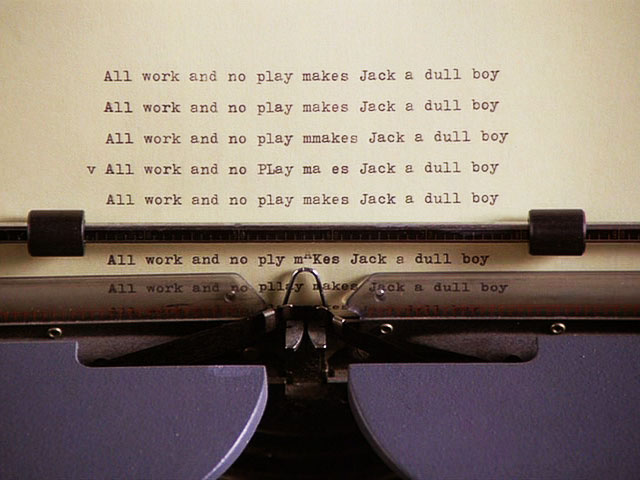