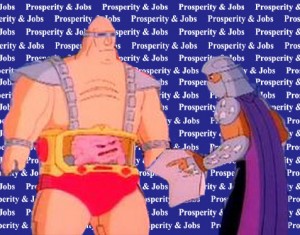 Krang, a disembodied brain in a robot body (or sometimes a tripod or flying chair) known for financing organized crime in New York City and elsewhere, named former Foot Clan Chief Executive Officer Oroku Saki, known as The Shredder for his aggressive negotiating style and deadly forearm blades, as President of Ninja Operations for the revived Foot Clan, which will be headquartered in Dimension X.

This “rescue” measure is a significant revision of the recently failed “bailout” measure, and comes with additional oversight that ensures accountability to the hard-working, regular disembodied brains of Dimension X: Krang will expand his robot body to enormous size and fight the Teenage Mutant Ninja Turtles himself, former executives Bebop and Rocksteady will be replaced by new executives Tokka and Razhar, and the agreement stipulates that “Shredder, you have failed me for the last time!”

It does not specify what would happen if the Shredder were to fail him again, as many analysts expect. 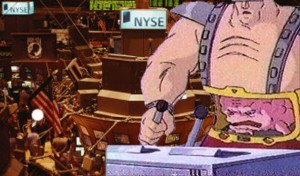 When asked by CBS anchor Katie Couric whether it makes sense to entrust a robot army with technology centuries more advanced than our own to a Japanese expatriate ninja whose primary experience is in street gangs, the Shredder was surprisingly candid.

“As a ninja master and long-time leader of the foot clan, I think it’s important to remember that creating jobs and the leadership of Lord Krang — Lord Krang is the leader, really, the only leader capable of bringing the Foot Clan, which is an exceptional ninja clan that will win the war of which I am the ninja master and long-time leader with the executive experience and Lord Krang and Tonight, I dine on Turtle Soup!”

The failure earlier this week of a “bailout” measure — totally different from the current “rescue” measure — had driven the venerated Foot Clan to seek bankruptcy protection. But Federal regulators are unlikely to oppose Krang’s move to essentially acquire the Foot Clan. Doing so would incur the wrath of a global army of millions of ninjas — now backed by considerable extraterrestrial technology — and ownership of more than 79.9% would force the Federal Government to list the Foot Clan’s considerable liabilities on its balance sheet.

“Nobody really believed that Krang was going to stay on the sidelines,” said Morgan Stanley analyst and giant fly Baxter Stockman. “This is an excellent plan, one that will assure the Foot Clan will stay globally competitive and that no small town or retired couple will find itself suddenly without a whole bunch of ninjas. This is necessary for both Main Street and Ninja Street.”

Before flying back into his office, Stockman added, “And it will finally destroy those pesky ninja turtles, buzz buzz!! Oh, I hate them so much! Buzzzzz!!” 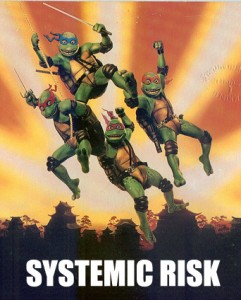 This is what people are talking about around their kitchen tables.

While many ninjas, robots and human/animal hybrid mutants are praising Lord Krang’s leadership in times of crisis, his experience, his ability to hit the ground running on Day 1, his unfailing answering of the giant video screen in his office, even at 3 A.M., his ability to shoot wolves with his rocket fists from a hovercraft, his standing up to special interests, his maverick, “I don’t listen to what other people tell me” supervillain attitude, his promise of change, and his probably not being a Muslim, some fear the rescue measure may not stem the tide of turtle-related write-downs as easily or immediately as its proponents may have hoped.

“I don’t really see how this changes things,” said industry insider Wingnut. “The underlying problem is that, no matter what we do, the Ninja Turtles keep kicking us in the face. This massive subsidy isn’t going to change that. You think a Teenage Mutant Ninja Turtle can’t fight a robot? Let me tell you, I have seen Ninja Turtles fight robots, my friend. It is not pretty. See, with most of us, they go easy, and just punch or kick us. With robots, they actually get to use their weapons.”

“For Christ’s sake,” said industry insider Screwloose, “the only reason the Shredder is in charge is that he’s the only one who can take even one of them in a fight . . . and there’s four of them! I hear they have laboratories in their basement where they just make any machine they want – for free! They don’t pay taxes or overhead, they eat nothing but pizza, and nothing we ever do puts a dent in that ‘Cowabunga’ nonsense.

They stop everything we do in less 30 minutes, except for once every few years, when we come up with something really special, and then they take an hour and a half.

I even hear they have a girl one now, and that she has magical powers. But I don’t believe that. That can’t be possible. How could things possibly get any worse?”

“Shredder needs to step back and recognize these turtles are a game-changer,” commented a homeless sports-themed vigilante who spoke on the condition of anonymity. “The problem isn’t with the quality of their paralysis beams or the quantity of the mutagen they produce. The problem is their business model. It just doesn’t work in the modern, ninja-turtle-having world. 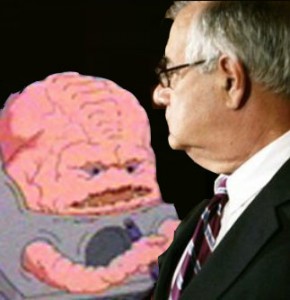 Lord Krang knows how to reach across the aisle

And Lord Krang ought to know better. I know it seems impossible now, but I wouldn’t be surprised if Lord Krang himself managed to get beaten up by the Ninja Turtles. He has pretty vast resources and he can make a lot of robots, but he’s taking on some pretty heavy exposure with this plan, and there’s a lot of risk there.

In the end, it might just be throwing good ninjas after bad. Or the other way around.”