This time around, I don’t think I’ll be able to give our next candidate quite the respect and time it deserves. 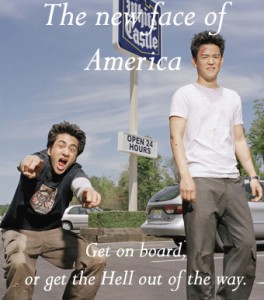 It is the most important film about race in America made yet in this young century.

And perhaps I will return to it in the future in even more depth, because it certainly deserves it.

Of course, I’m taking about Harold and Kumar Go to White Castle.

Consider this the Cliff’s Notes – my short, simple attempt at tackling this cultural touchstone. And of course you choose to use the Cliff’s Notes, because you fail to understand how the competitive landscape of being young in America actually works.

Or perhaps because you know it all too well.

Learn more about that greatest story of the 2000s, the rise of Asia and the Asian-American, and what this remarkable little comedy has to say about it, after the jump —

Harold and Kumar was given birth by the the sort of stories that parents tell to SAT-age children to scare them into staying up nights studying, or the kind of stuff that keeps you in New York Times columns and bestselling books for the better half of your middle-aged years.

Personally, I think the meta-story here, the trend that made Harold and Kumar as inevitable as any work of its kind might be (in my opinion, not very, but that’s a separate matter) is one of the great human stories of our era, something we should be proud to witness, and perhaps America’s last, best hope for holding onto its soul at the tail end of this new gilded age.

And you know what? That’s not their fault, it’s entirely yours. Thankfully, it’s not a zero-sum game. 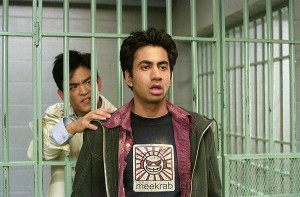 A whiff of the ganj, or the sweet scent of opportunity?

Look, I’m not here telling you Harold and Kumar is the best movie ever, or even the best movie of 2004. It clearly isn’t. You don’t need me to tell you that.

But it is the most culturally important – both in terms of the feat it accomplished in building the vocabulary and semantics around its key subject matter, and in terms of fleshing out the epic landscape of American literature with a fitting foundational narrative for some of its latest, greatest arrivals.

And “cracking” the movie is as simple as realizing that the biggest, most obvious symbol in the movie isn’t just there by accident.

It’s not a coincidence that Harold and Kumar “go to White Castle.” 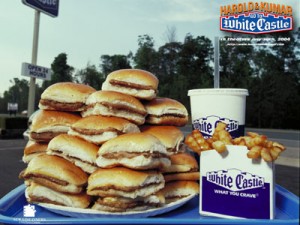 America is the whitest castle of them all.

(Or, for that matter, that they “escape from Guantanamo Bay,” but that’s another movie)

Harold and Kumar Go to White Castle is about young, educated Asian guys taking the things in society that are usually reserved for young, educated white people — things they do and should have every right to under the unofficial American credo of equal opportunity, but which social convention and their own self-imaginings have not resolved yet to give them — things high and low, admirable and less so, awesome and less awesome, but desirable things — things like the freedom to choose your profession, the professional cache to force other people to do your work, pot, random hook-ups, hanging out with the coolest people, road trips, crazy parties, etc. It’s about them busting through restrictions placed on them by their ethnicity and taking their share of the American Dream.

But it’s simultaneously making fun of these things and showing that the ideal to which most white people aspire is pretty silly, and often downright empty. And it’s in this sidelong disinterest in the rewards of prosperity that Harold and Kumar really merge with American culture and force American culture to merge with them.

Sure, now they are big time and they get to just run into and hang out with TV stars, which previously Asian guys wouldn’t be allowed to do, but the TV star turns out to be Neil Patrick Harris, and he’s a crazy cokehead who steals your car. 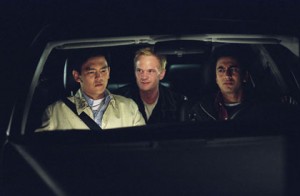 “The word ‘ivory’ rang in the air, was whispered, was sighed. You would think they were praying to it. A taint of imbecile rapacity blew through it all, like a whiff from some corpse.”
-Joseph Conrad, Heart of Darkness

Sure, now they see themselves as big shots who know how to party better than the more traditional, passive Princeton Asians, but it turns out those people have the craziest parties. It turns out that being the cool guy isn’t all it’s cracked up to be.

“White Castle” as a restaurant is ironic in itself, because it conjures associations with the fanciest, wealthiest, most prestigious, impressive sort of place, but they are immediately trashed — it’s really the cruddiest of the burger joints with the smallest, lousiest burgers, and to get there they have to drive all over the place on the New Jersey Turnpike (I would like to note that the biggest factual error in the movie is that everyone from NJ knows there is a White Castle much closer to Harold and Kumar’s place than the one they drive to, but, hey, suspension of disbelief).

It’s simultaneously a comedy of people breaking out of their social role (Like, say, Trading Places), and a comedy that takes place in a world-turned-upside-down (Like, say, Dr. Strangelove or, more recently, Step Brothers).

Still, it’s important to remember it isn’t a movie about everybody being awesome. And it’s not so much about making society the way we want to make it as making fun of how society is. It’s not quite epic, it’s mock-epic. 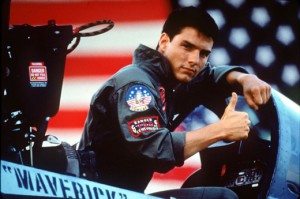 Sometimes, the line between epic and mock-epic is not at all clear.

And I think that’s what makes it relevant where so many other explorations of the Asian-American soul fail to gain mainstream traction. Because we’re not a nation-building civilization right now. People are trying to erect new cultural edifices, and they are having trouble keeping them standing, because our society seems very fluid. We are overrun by our own institutions and caught up in our own complexity. In these kinds of environments, mock-epics tend to thrive and give us a better idea of what’s going on than conventional ones.