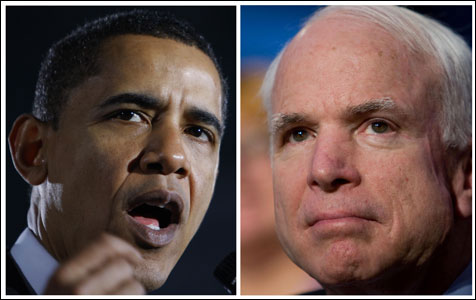 If political news was drugs, I’d probably be in Betty Ford right now. Or dead of a massive overdose.

I read way way too many blogs, both for the articles that buttress up my own opinions, and the ones that I violent disagree with. When things are going well for my guy, I want to bask in the elation. When things are going poorly, I spend even more time online, looking for people who will tell me, “There there, it’ll be alright. Shh.”

But the election won’t be decided by people like me, because people like me already know who we’re voting for. We’re not in play. It’ll be decided by the people that don’t have a side yet. And that’s what I can’t quite get: after two freakin’ years of non-stop politics, how can you still be Undecided?

Like any election, most voters were locked in before the candidates were even announced. I will most likely never vote for a Republican, and most Republicans I know (yes, I know some) would never vote for a Democrat. And the few actual Independents I know made up their minds months ago. Yet, there’s still a big block of Undecideds, seemingly immune to our most frenzied entreaties.

But the Undecideds aren’t what amaze me the most. I can totally understand why you’d want to wait until the debates, and see the two of them speak without a teleprompter. What really puzzles me are these shifts in the polls.

Who are these people switching sides? Whoever they are, they’re the people causing these three-point fluctuations that are driving us all to the brink of insanity.

But I have a solution. I want these people to step out of the shadows and post a comment below. I’m talking about the Undecideds, who really don’t know who they’re going to vote for, as well as the Switchers, who have gone from one candidate to the other in the past few months. Don’t be shy – step right up and introduce yourselves.

I’m not even going to try and get you to vote for my guy. I’m just curious what it’s like to not have your mind made up. It might be nice to hear from someone who hasn’t long ago dug in their heels for an all-out fight to the death.

Or read more from… Politics, Barack Obama, john mccain, sweet lord when will it end?

30 Comments on “In search of the legendary Undecideds”