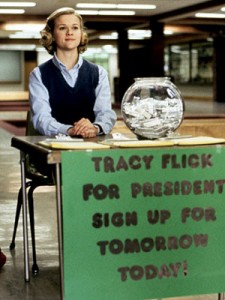 New York Magazine: “Is Hillary Clinton secretly the exact same person as Tracy Flick, the beloved Reese Witherspoon character from the movie Election? She’s blonde, she’s driven, she’s oddly sexless (even as she is sexualized by others), she’s competitive and ruthless, and sometimes you wonder whether she has the emotions of normal people.”

Daniel Spiro: If I’m right, Clinton’s “Flick issue” will follow her more and more with the passage of time. Come November, she’s going to have to bribe voters with a whole lot of customized cupcakes if she hopes to win a popularity contest. 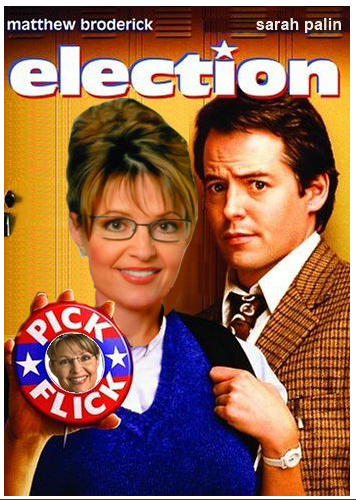 Andrew Sullivan: “She has this weird tick of scrunching up her face to make a forceful point. Kinda Tracy Flicky.”

Palinfacts.com: “To prep for her role as Tracy Flick in “Election,” Witherspoon spent the ‘98 seal clubbing season with Palin.”

And a lot of miscellaneous blog posts. Click here to see for yourself.

14 Comments on “All female politicians are Tracy Flick”