In case you missed the announcement from the other week, former Republican Presidential Candidate and occasional cross-dresser Rudy Giuliani was tapped to give the keynote speech at this year’s Republican National Convention today.  To help you follow along with what will surely be a memorable speech, I’ve prepared this handy guide: 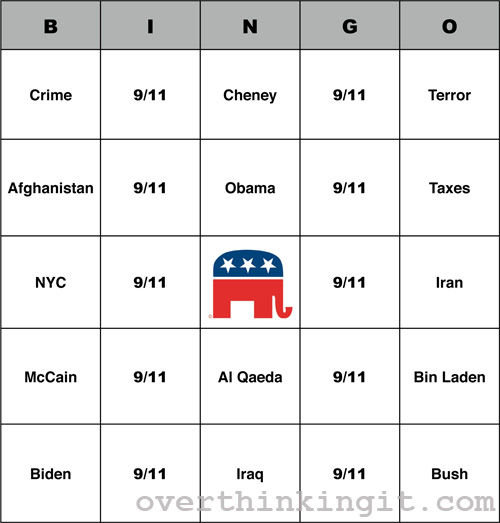 Whoa??!?!? VERTICAL PARALLEL LINES? Made up of “9/11″s? Too soon?  My fellow Americans, before you get offended and prepare your flaming comments, overthink this one with me after the jump.

As we’re all aware of, 9/11 is still a touchy subject in pop culture, one that both producers and consumers still haven’t quite figured out how to deal with.  Exhibit A (WARNING: VERTICAL PARALLEL LINES TO FOLLOW): 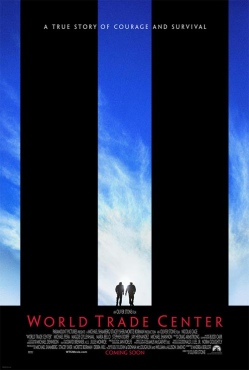 Oliver Stone’s film, “World Trade Center,” was for the most part well received by critics (71% by Rotten Tomatoe’s calculation) but took plenty of heat from New Yorkers, 9/11 survivors, and others for being, well, “too soon.”  But Stone made sure to steer clear of injecting into his portrayal of 9/11 his own political agenda, unlike… this guy, Exhibit B: (WARNING: VERTICAL AND HORIZONTAL PARALLEL LINES TO FOLLOW, IN ADDITION TO DOUCHEBAG POLITICIAN): 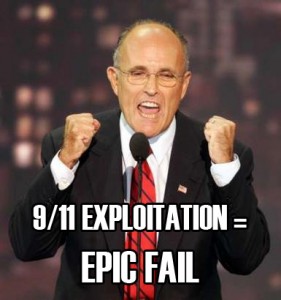 Still, even though the negative reactions to Stone’s film and Giuliani’s political exploitation are somewhat different, they really just come back to the question posed in the title: Too Soon?

Too Soon to viscerally recreate the events of the day on film?

Too Soon to exploit being mayor that day for votes?

Likewise, Too Soon to create a bingo board where 9/11 forms VERTICAL PARALLEL LINES?

Some may consider it Too Soon for this (by my opinion) modest dig on Giuliani and his 9/11 fixation. But, my fellow Americans, in closing: If I can’t make vertical parallel lines on my fake bingo board without fear of persecution, then the terrorists have already…ah, never mind.