This week’s New York Times Magazine prominently features an article on Barack Obama and the supposed “End of Black Politics,” but before I could starting reading it, I couldn’t help noticing something familiar about the picture that accompanied the article. 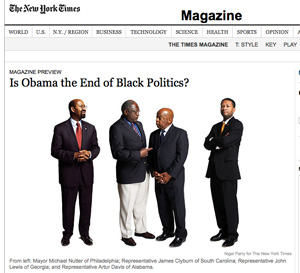 Did I go on to read it?  Heck no!  Instead, true to the way of the internets, I added my own captions, did some Wikipedia research, and created a graphic for your enjoyment — after the jump. 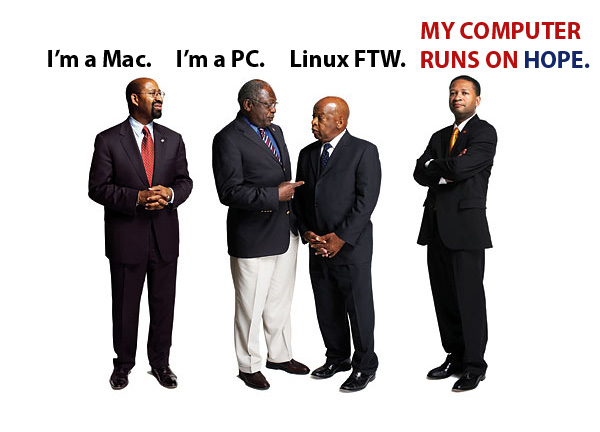 PC: Representative James Clyburn of South Carolina.  Considered to be the most influential African American politician in his state, much like how PC/Windows is the market leader in its field.

Linux: Representative John Lewis of Georgia.  One of only 31 members of the House of Representatives to vote to not count Ohio’s electoral votes in the 2004 election.  Very indie, and very much in the minority, like Linux.

Hope OS: Representative Artur Davis of Alabama. What the heck, he was the guy standing to the far right with his arms folded across his chest.  It just worked. That and I wouldn’t be surprised if he’s helping the Obama campaign create its custom Linux distro (the aforementioned Hope OS) as we speak.

Got any better politician – > OS comparisons?  Show me in the comments!