The film composer Howard Shore has written an opera. It is an adaptation of one of the movies he did the music for. However, it’s probably not the one you’d expect/hope. Here’s a list of operatic movies Howard Shore has scored, that are NOT the movie in question: The Lords of the Rings, The Departed, The Silence of the Lambs, Philadelphia, The Aviator, and The Gangs of New York.

Instead, Howard Shore looked back upon his body of work, and decided The Fly really needed to be an opera. And there’s a photo after the jump. 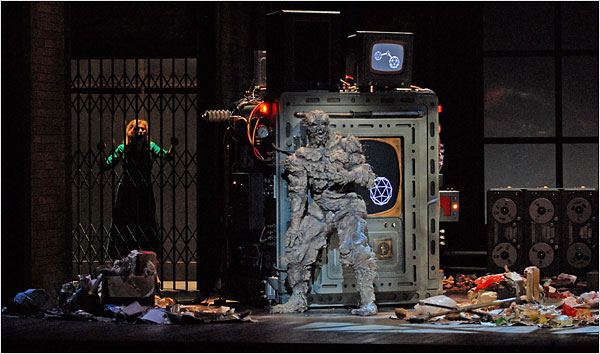 You can read all about this strange, strange thing here. I definitely like the film a lot. It’s truly horrifying, and not just because it makes you picture Jeff Goldblum having sex with Geena Davis. But honestly, it’s not a movie I would have picked as opera material. It’s a scant 95 minutes long – definitely light on plot. Aren’t operas supposed to be long and dense? And although I remember the movie pretty well, I don’t remember any of the music.

However, it’s being directed by the same guy who did the film – David Cronenberg. Cronenberg is currently hot, coming off of Eastern Promises, so I doubt he’d do this unless he honestly thought it was awesome. So I’m curious. Could The Fly: The Opera be good? And if so, what other film scores need to be adapted into operas?

2 Comments on “It ain’t over until the Brundlefly sings”