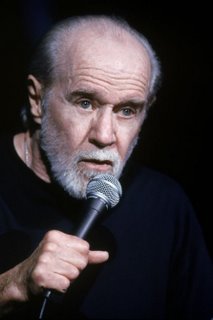 Yes, George Carlin has died of heart failure. He was 71.

Check out his Times write-up here. It does a better job of summing up his illustrious career than a chump like me ever could.

I had the pleasure of seeing George Carlin live once — he came to Yale to give a talk; it was billed as something between a lecture and a stand-up set. This was about six, maybe seven years ago.

He also ennumerated his moral and religious beliefs (not many of the latter, Mr. Carlin was none too fond of religion). He spent a fair amount of time on a bit I’ve heard since — reducing the ten commandments to two. I remember what he said, and in lieu of a review of his amazing career here (he hardly needs a guy like me to praise him) I’ll list those two commandments as I still remember them, and a few other remarks on his remarkable legacy, after the jump…

He spent a lot of time talking about his upbringing, which tough and urban and full of strict moralizing that obviously, and thankfully, didn’t quite take.

Not his best work — but I remember it because I was there to hear it myself. That was kind of cool, and the kind of memories you share when people pass away.

I hesitate to sum up Carlin’s career by saying he was a great stand-up (yes) or a great actor (less so), because he really was more of an all around cultural critic, especially later in life — a thinker and originator of ideas, and a populist rhetoritician who commanded equally with his compelling ideas and his style in getting him out there. I like to think of him as the late 20th Century’s Erasmus. Except you know he could kick Erasmus’s ass from here to Rotterdam.

And yes, he was very funny. Masterfully so. But mastered to the point where you always knew he had a little more — I can only think of one other time somebody been so widely acknowledged as one of the funniest guys on the planet and still be so remarked on for his broader influence.

I put George Carlin right up there with Richard Pryor as an overall performer without hesitation — they had different strengths and very different cultural influences (Pryor is revered in a way that it will be difficult for anyone else to be revered again, because he was such a trailblazer), but the fact that we’re even in the same ballpark is high, and deserved, praise for Carlin.

I hope for our sake George continues to watch over us and help us pass our history classes. 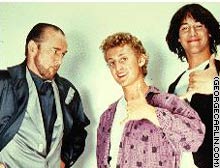 You’d probably yell at me for saying it if you ever gave a shit who I was, but via con dios.

5 Comments on “George Carlin Passes Away”