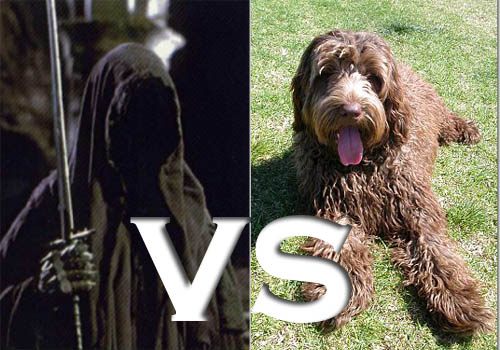 At one point in The Return of the King, Gandalf tells Pippin:

Sauron has yet to reveal his deadliest servant. The one who will lead Mordor’s armies in war. The one they say no living man can kill. The Witch King of Angmar. You’ve met him before. He stabbed Frodo at Weathertop. He is the lord of the Nazgul, the greatest of the Nine.

And I thought to myself, “Oh, you mean that dude they chased away with a torch?”

Everyone in these movies talks about the Nazgul like they’re Jason, the Terminator, and Anton Chigurh rolled into one. As far as I can tell, they are pretty much useless. In fact, I think Sauron would have been better off sending a labradoodle, and I’m going to prove it.

Frodo senses the Nazgul coming. He and his friends hide by the side of a road as the black rider approaches. It proceeds to sniff around right at the edge of the road, unaware that if it moved its head about six inches, it would see Frodo staring at him with his freakishly large eyes. The hobbits get rid of it by tossing something in the opposite direction and noisily running away.

How a labradoodle would have handled it: It would have bounded off the road to investigate the Ring-smell, and found Frodo instantly. And if Sam threw something in the opposite direction, about five seconds later the dog would bring it back to him to throw again.

The Nazgul has found the Ring. Frodo and his friends run to a dock and jump on a raft. The Nazgul skids to a halt and gallops off in search of a bridge.

How a labradoodle would have handled it: Labradoodles love water. It would have been on that raft before Sam could say, “Mr. Frodo!”

A group of five Nazgul attack the hobbits on Weathertop. By “attack,” I mean “very very slowly approach,” so that Aragorn has plenty of time to come save them. And I feel like the Nazgul give up a little easily, even considering that Aragorn ranks pretty high on the badass scale. They’ve got him outnumbered – can’t they all just lunge in at the same time and try to take him out? And one of them is supposedly invincible. Yes, we know it’s just a cleverly-worded prophesy, but he’s convinced he can’t be killed. So that guy has no excuse for retreating. So what if you’re on fire? You’re invincible! Stop drop and roll, then grab the ring.

One of the Nazgul, now equipped with a flying mount, catches up with Frodo at Osgiliath. Frodo stands on a bridge right in the open and actually holds the Ring up. Ring-taking does not get any easier. But the Nazgul hovers there for about 30 seconds for no reason. It’s finally moving in when the flying thing is hit with a single arrow. The Nazgul gives up and goes home.

You know what I think the problem is? The Nazgul have spent hundreds of years just sitting around Barad-dûr, nothing to do except play cards. By the time the Ring is finally discovered, they’ve gone soft. They’re slow, they’re afraid of water, they’re afraid of fire, and even their flying rides throw in the towel at the slightest splinter.