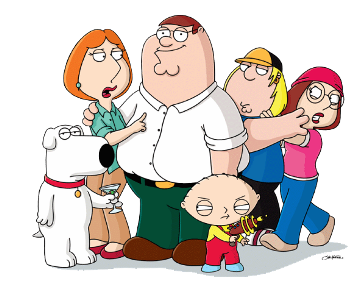 I have had a love-hate relationship with Family Guy. Or, more precisely, a love-indifference relationship. Honestly, it wasn’t even on my radar during the first Fox run, though I was of course aware of occasional gems. I didn’t watch it on Adult Swim or buy the DVDs.

My indifference was never informed by anything like a moral stance. Contrary to the impression I may have given, I’m not prudish in the least, and frankly relish comedy that is blatantly offensive. (Click at your peril. It gets worse and worse.)

In fact, I think that the supposed “offense” actually does more to reveal and ironize the double-dealing — from subtle forms of self-deception to the most blatant hypocrisy — that is a daily feature of life in the world’s only current superpower. (Do you hear me, China? Your souls are in peril! Sarah Silverman tried to warn you!) I’d actually like to talk about offensive comedy more, but that’s for another post.

Long story short, I got into the show when it returned to Fox last year, and it is in a spirit of profound admiration that I offer you the following clip, which may be the most perfect comic artifact the show has produced. Video after the jump.

(Note that I’m talking about the physical comedy of trying to get the frog out the window, and not the “holes in its back” gag.)

Orchestration, pacing, physicality (some really good animation in the expressions on Peter’s face)… I think it’s brilliant. That it sends up a bourgeois false relation to nature and death is icing.

4 Comments on “A Lesson in Comedy”