I find some things funny by virtue of my singular personality and strange sense of humor. Other things I find funny because they are actually awesome. If you’ve been reading this week, you know that I could Lasagna Cat by Fatal Farm as one of the latter.

Today’s joke that we beat to death comes from Lasagna Cat 04/08/1998 (this is the date the original comic ran). And it’s a visual gag: 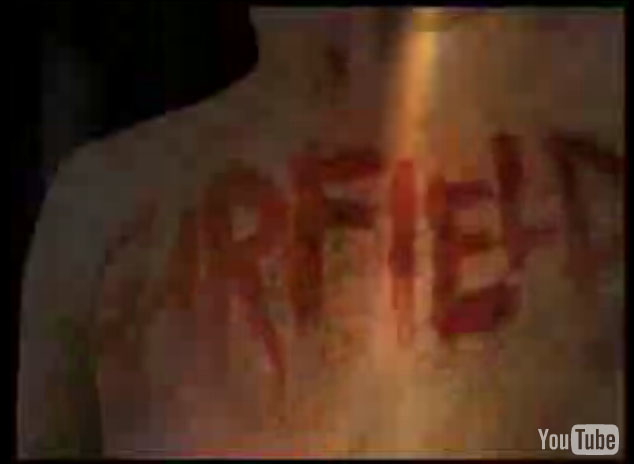 The above frame is hilarious. If you don’t get it, that’s a shame, but dont’ despair! You’ll get my full breakdown, and the full video, after the jump.

When somebody else doesn’t get a joke that you clearly know is awesome, you have three options:

And this is Fenzel, so let’s do this.

So, the screenshot — when Jon writes “GARFIELD” on his chest in lipstick during the Nine Inch Nails parody, that’s a really, really complicated moment. I’m not surprised if your reaction to it is more “WTF?” then laughter. At least at first. But with my explanation, you’ll be laughing in no time. Here’s what’s going on, as I see it:

So on top of all the ironies and mockeries, it’s actually a complex statement of the meaning of the comic, which is hilarious, because it sets up this idea that Jim Davis has this like weird subliminal thing going on between Jon and Garfield that not even he recognizes. And I think we all recognize that what’s really funny is the truth.

What did I tell you? Hilarious!

This is why you should always explain all your jokes! It spreads joy around the world!

And kudos once again to the Fatal Farm guys. I’m giving you as much props as it’s pretty much in my power to give.

Did I miss any angles on the joke? Any new wrinkles or interpretations? Get anything totally wrong? Am just crazy? Sound off in the comments!

4 Comments on “Beating the Joke to Death: Lasagna Cat Follow-up”