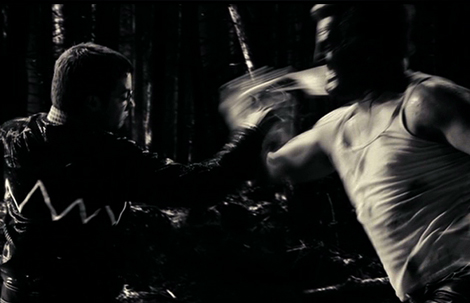 Elijah Wood is a hobbit with the cheekbones of a little girl. According to Wikipedia, he smokes clove cigarettes. In fact, Elijah Wood may be the single least intimidating person in Hollywood, and that includes Dakota Fanning.

Mickey Rourke has been beating his way up the food chain to find out who killed his one night stand. He goes to a mysterious farm and discovers a human-looking bone. But his CSI moment is interrupted by a jump kick to the face. “That’s impossible,” his internal monologue whines. “Nobody can sneak up on me.” But Elijah Wood is a sneaking expert – don’t forget, he snuck into Mordor.

Wood gives Rourke a couple kung fu kicks and then some razor-sharp nails to the face, blinding him. A sledgehammer to the side of the head knocks him out.

Rourke returns to the farm for a rematch. He prepares by stringing razor wire between some trees, then gets Wood’s attention with a Molotov cocktail. The little guy hops through a window and dodges a clip full of bullets, then does a flip over the wire. But then he embarrasses himself a little by kicking Rourke’s empty coat, hung on a tree branch as a decoy. Dude, how do you spot the hidden razor wire, and then attack a coat?

Wood kicks Rourke in the face a bunch, but then Rourke plays his ace – he handcuffs the two of them together. Truthfully, I don’t know if this is such a great idea. Considering Rourke has never even managed to lay a finger on the guy, attaching himself to Wood seems like it might be doing him a favor. But it works shockingly well; Rourke connects with a right hook, and that’s all she wrote. Wood’s down, and ready for gristly execution.

Nah, that’s it. Once you know it’s Elijah Wood up there, there’s no way to swallow this.

Elijah Wood and Mickey Rourke shot their scenes separately, and were composited together in post. In fact, Rourke had completed shooting before Wood was even cast.