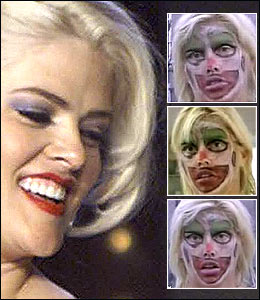 The crew at Overthinking It are committed to reflecting thoughtfully on even the most crass of cultural phenomena. We’re like doctors: you can tell us all your embarrassing secrets. We will nod sagely, and prescribe a cream you can put on your junk.

The life and career of Anna Nicole Smith (née Vickie Lynn Marshal) could be called the most telling artifact of American culture at the opening of the twenty-first century (not by us, but by some bloviating twit or other). The woman became a canvas onto which a culture could project its darkest fantasies and consuming obsessions—celebrity worship, plastic surgery, fad dieting, greed, drugs, boobies—a demented clown enacting in distorted parody the most decadent aspects of late capitalism.

Today, Friday, February 8, 2008, we pause to remember the one year anniversary of the woman’s death. The posts may be irreverent. They will almost certainly be in bad taste. But they will not—you have my word here—be underthinking it.