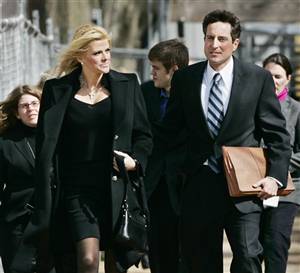 Based on the past press coverage of Anna Nicole’s legal woes, one might get the impression that J. Howard, her aging wealthy husband, left her a vast amount of his estate in his will and that the litigation that made its way up to the Supreme Court was about the J. Howard estate. But Anna Nicole’s litigation woes were for the most part, not about probate at all. J. Howard actually did not leave her anything in his will: his son, Pierce, was the sole beneficiary of the estate. J. Howard intended to provide for Anna Nicole after his death with a trust, which would give her a portion of the appreciation of his assets. According to J. Howard’s will, any assets not allocated to Pierce would be placed in Anna Nicole’s trust at his death.

Wills are subject to the jurisdiction and authority of a probate court, which is a form of judicial oversight over the process of dispersing the assets of the estate, a process which also includes the settlement of tax liability and any creditor’s claims against the estate. As J. Howard’s will was going through probate court, Anna Nicole became broke and filed for bankruptcy. Pierce sued her in bankruptcy court claiming that Anna Nicole had been defaming him by saying he had been fraudulently interfering with the amount of money that would go into her trust. Anna Nicole counter-claimed, claiming that this was true, and a “tortuous interference with inheritance or gift”. The elements of this legal claim—a tort—are laid out below here (taken straight from The Restatement, a book written by law professors to both summarize the common law in a concise way and to also come up with some idealized, academic versions of what the common law should be):

Section 774B of the Restatement (Second) of Torts, “Intentional Interference with Inheritance or Gift”: One who by fraud, duress or other tortious means intentionally prevents another from receiving from a third person an inheritance or gift that he would otherwise have received is subject to liability to the other for loss of the inheritance or gift.

Courts generally have held that a plaintiff must plead and prove the following five elements:

Anan Nicole argued that: (a) she was expecting money from her trust; (b) Pierce, the son, had been doing all kinds of backhanded fraudulent stuff to keep assets out of the trust; (c) doing fraudulent stuff is tortious; (d) she probably would have received money from J. Howard but for Pierce’s fraudulent behavior; and (e) she has monetary damages.

Anna Nicole won in the bankruptcy court and received $449 million plus $25 million in punitive damages. Anna then dropped her claims in probate court about the will being invalid-because at this point, what did she care that J. Howard left her nothing?

The district court decided it had the authority to decide this case, because at issue was a claim of tort, not whether or not J. Howard’s will was valid. The district court then reviewed the case and found that Pierce had tortiously interfered with Anna Nicole’s trust expectancy. However, the Ninth Circuit, the next highest appellate court, reversed. The Ninth Circuit felt that to decide this case was to not follow the probate exception.

But finally, when the case made it to the Supreme Court, Justice Ginsburg told those fools that the probate exception is super narrow, and essentially only means that federal courts shouldn’t oversee the administration of estates and shouldn’t decide on the validity of wills and other specifically “probate-esque” matters and that this claim did not fall under the exception.

Now we know that federal courts can look at the claims of people like Anna Nicole, who, having not been named in the will, need to argue that they were expecting something from the dead guy anyway.